When The Reg followed October's World Solar Challenge from Darwin to Adelaide, we couldn't help but notice its route followed the route taken by what was arguably Australia's first large-scale nation-building project aimed at speeding the flow of information, the Overland Telegraph (OT).

Like other networks of its day, the OT was essentially digital: it carried dots and dashes between Darwin and the south.

The facts of that project are so well-known that they've become part of the National Broadband Network debate: commenced in 1870, its eventual cost of ₤128,000 was well above a billion in today's dollars. It was also the first attempt to create any trans-continental infrastructure in Australia, and covered a 3,200 km route.

When you're following its route in an air-conditioned rental 4WD it's hard to comprehend just how hard it would have been to build the OT, what with it needing a few thousand poles to traverse just 100km of the 3000km route and only pack animals available to do the heavy lifting.

In the NBN era, where media is discounted as a reason for anything because it's just entertainment anyhow, it's also interesting to remember that the visionary behind the OT, Charles Todd, wanted to speed up Australia's access to news. At the time we were stuck with months-old newspapers arriving by boat: Todd talked governments into dropping serious swag into the kitty, in part on the argument that we'd be able to get news faster.

What's also all-but forgotten is that, like any good telecommunications infrastructure, that route – or at the very least a significant chunk of it – stayed connected through various upgrades of technology, right through to the fibre-and-mobiles era.

While little remains of the OT, other than the occasional pole, broken wire or telegrapher's residence, artefacts of successor networks are out there.

Take, for example, this artefact, one of many such to be found on the Stuart Highway through the Northern Territory. 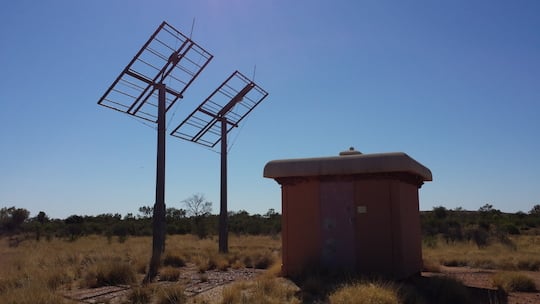 An abandoned Telstra facility on the Stuart Highway

Most people simply drive past the decaying infrastructure without giving it a second look. But being curious, El Reg stopped the car here, bounded – or at least struggled – through the spinifex to get a closer look.

One thing you'll notice is that this facility used a fair amount of electricity. Those structures that look like they're designed to hold solar panels are exactly that; many of these buildings still have panels attached to them.

Of course, these panels – or at least the structures they were built to power – are ancient. They date back to before 1993, because they and their associated infrastructure carry the “Telecom” brand, which was changed to Telstra twenty long years ago.

It's a cable repeater station: not for optical fibre, but for a coaxial cable built for the pre-digital voice system. And it's nice to know that the route is still marked down for dial-before-you-dig purposes. 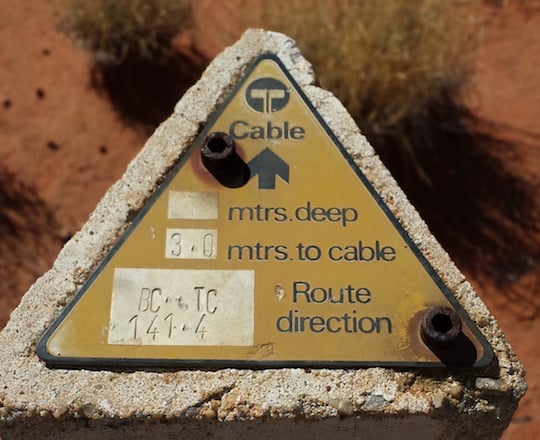 To be fair, if you have rights on a route, you don't give them up: a careless backhoe, we expect, would now cut a fibre following the same path.

Getting close, it becomes clear that there's nothing going on inside the building these days, or someone would surely have cleaned up the wasp birds' nests* that block the ventilation.

The Register has asked Telstra how many channels the system provided – whether it was a supergroup of 60 voice channels, or a mastergroup of 300. We'd be surprised if the Alice Springs run was, even in the 1980s, demanding more than 300 simultaneous voice calls, since Pine Gap probably makes its own communications arrangements.

The number of repeater stations (El Reg didn't actually measure the distance, but there's no more than 100 km between each one, so in the 1,500 km between Alice Springs and Darwin, there are at least 15) also explains what made Telstra an early adopter of solar power. Running the cable on generator-powered repeater stations (wherever grid power isn't available) would have been hideously expensive.

But put that effort – the sheer to-hell-with-the-big-empty, we'll-do-it-anyway slog of the thing – into today's “can't do it, can't afford it, you don't need it” attitude. It's hard to think that we're anything but less than our predecessors. Run a heavy, endless slab of copper cable through inhospitable country, unrolling it with the hands and burying it with shovels? Been there, done that, got the melanomas, retired the system.

Carry a slim fibre optic cable to mostly urban homes? Naah, too hard, to expensive, can't do it.

Of course, these are obviously abandonees: houses haunted with the ghosts of communications past. The locals know it – and interestingly, the abandonment of this cable is projected onto a different kind of infrastructure.

“Yeah, long gone,” they'll tell you. “The world's gone all optical fibre now. But they'll just leave them there. Too expensive to knock 'em all down”.

In this, the locals don't know it, but they're mistaken.

Once again, El Reg became curious, and spotting a microwave tower hard by the highway, we turned in, drove the dirt access road, and walked up to the fence. With a suspiciously-shiny padlock. Reasonably-new tyre tracks through the gate, and footprints visible in the sand.

Unlike the cable, the point-to-point microwave trunk running down the Stuart Highway is most definitely still active. It's also still maintained, and still upgraded. As you can see, Telstra sees enough value in the infrastructure to put in new containerised equipment on a concrete pad that's still got nice sharp corners.

And from the outside of the fence, you can hear the fans running. 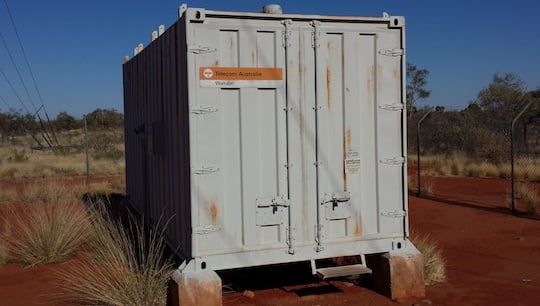 It lives! A Telecom comms container in the desert, from which Vulture South heard the unmistakable sound of humming fans

The Darwin-Alice microwave was quite the big deal in the 1970s, when it was constructed. Telstra kindly provided this article from the Telecommunications Journal of Australia announcing the project:

The Telecommunications Journal of Australia, announcing the microwave network

The Register notes with relish the early application of the term "broadband" in the 1974 article (a whole 300 voice calls!) - and notes with surprise the price tag, a mere $AU8 million, or about $AU60 million today.

Scott Whiffin of Telstra Media Relations told Vulture South that there are engineers whose "eyes light up" when they're asked about the history of the network. Those engineers also kindly provided early design drawings and shots of the construction: 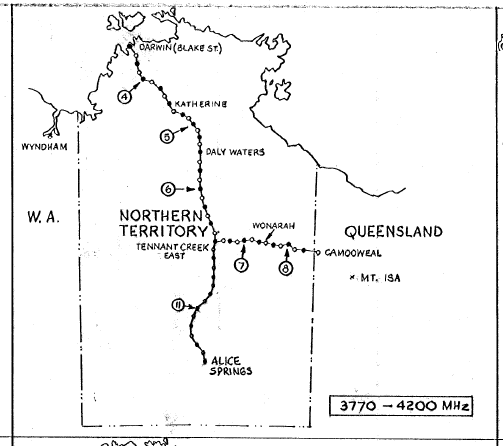 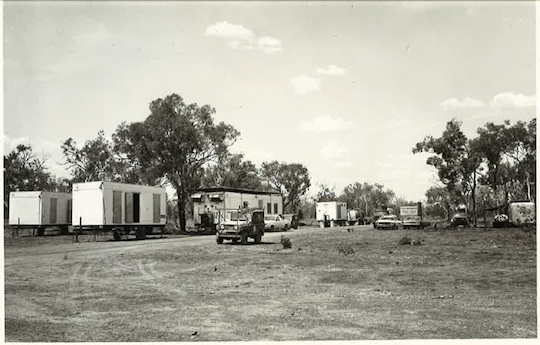 The builders had all the comforts of home: 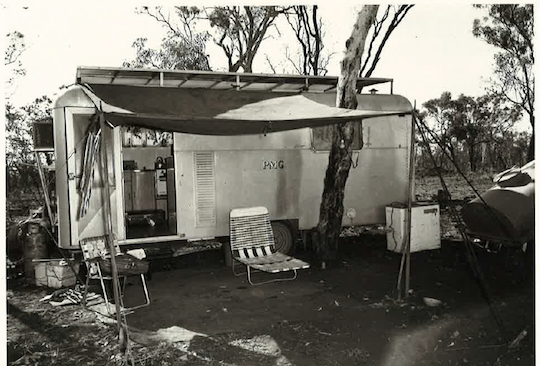 But that's only fair, considering some of the tasks they had to put up with, like climbing a tower in the desert to paint it: 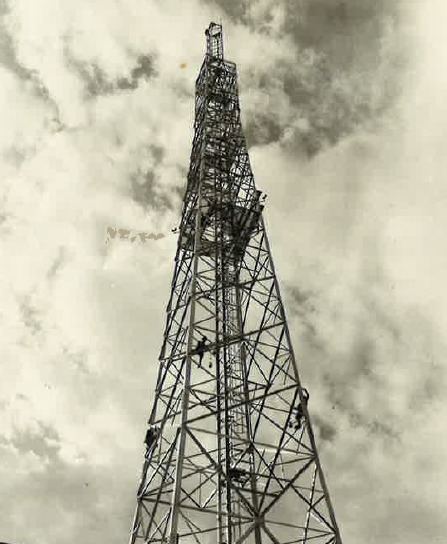 Next page: Hold on right there...
Page: