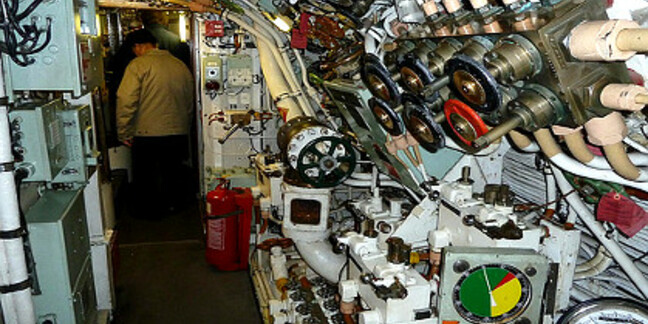 The decommissioned British sub can now be toured using Google Maps, although The Register has learned the Chocolate Factory did not manage to squeeze the infamous Street View car into the boat.

Instead, it called upon the services of C Inside Media, which specialises in putting indoor locations on Street View. The firm's work has previously allowed the world to tour a straw Dalek, snoop around a mocked-up 1960s branch of Tesco and visit almost 100 Fullers pubs in London.

Neil Cooper of C Inside led the project. Although he is bound by Google's non-disclosure agreements, he said that the Chocolate Factory has strict rules on Street View.

"A submarine is a strange example of our work," he said. "We always have to follow Google guidelines, which state there should be five to 15 feet [1.5m to 4.5m] between each node, which are the places users click between.

"Users shouldn't be able to click through doors or tables and they should follow a direct line of sight."

The submarine “street” view has a few oddities within it, including a perfectly plaited cake alongside several croissants in the boat's galley. Ocelot's mighty V-16 diesels can also be seen, as can her six torpedo tubes and the bafflingly complicated control room.

"We also saw a photograph of a sailor's girlfriend still pinned to the wall," Cooper recalled. "She had her clothes on and the image just showed her face. There was also two red flashing indicator lamps, which had a sign above them with the words 'wrong direction'."

HMS Ocelot, an Oberon class diesel-electric submarine, was launched from Chatham Dockyard in 1962. After spending nearly 30 years in commission with the Royal Navy, she paid off in 1991 to make way for the short-lived Upholder class.

She was the last sub built for the RN at Chatham and is now a tourist attraction. ®

Interested Reg readers can learn more about Ocelot herself on the Historic Dockyard Chatham website, and about the Oberon class submarines on Wikipedia - complete with some surprisingly detailed technical information.