Boffins have found evidence that a giant, sharp-toothed, flesh-eating platypus once roamed the waterways of Australia. 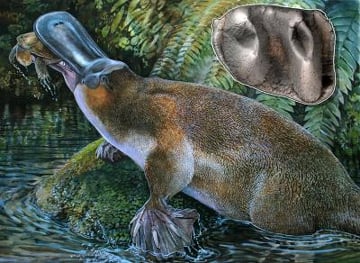 The regular modern platypus is already a pretty strange beast, with a duck's bill, otter's fur and beaver's webbed feet. It lays eggs rather than giving birth to live young, its bill is covered in electroreceptors that sense its prey underwater and the male of the species has a venomous spur on its hind foot.

This strange mixture of features and the fossil record up till now has led scientists to believe that the platypus lineage is unique, with only one type of the species living on Earth at any one time. Now, however, paleoboffins have found a single tooth that indicates an entirely new branch of the platypus family tree.

"Monotremes (platypuses and echidnas) are the last remnant of an ancient radiation of mammals unique to the southern continents. A new platypus species, even one that is highly incomplete, is a very important aid in developing understanding about these fascinating mammals," said PhD candidate Rebecca Pian, lead author of the study.

The new species, named Obdurodon tharalkooschild*, would have been over three feet long, twice the size of the modern platypus, and had the necessary sharp teeth to eat not just crayfish and other small crustaceans, but frogs and small turtles as well.

"Discovery of this new species was a shock to us because prior to this, the fossil record suggested that the evolutionary tree of platypuses was relatively linear one," said Dr. Michael Archer of the University of New South Wales, a co-author of the study. "Now we realise that there were unanticipated side branches on this tree, some of which became gigantic."

The full study was published in the Journal of Vertebrate Paleontology. ®

* The first part of the new species' name, Obdurodon, comes from the Greek for "lasting tooth" to distinguish this branch from the modern toothless variety of platypus.

The second part of the name comes from an Indigenous Australian creation myth about the origin of the platypus. According to the story, in the Dreamtime, Tharalkoo was a headstrong female duck who disobeyed her parents' warnings not to swim downriver where Bigoon the water-rat could catch her and have his wicked way with her. Like anyone who disobeys their parents in a fairy story, things turn out exactly as they said they would and Tharalkoo is ravished by Bigoon. When she returns home, the other female ducks are all laying eggs, so she does the same. But instead of a baby duckling, Tharalkoo's child is a chimera with the bill and webbed hind feet of a duck and the fur and front feet of a rodent - a platypus.