Google Nexus 5: So easy to fix, it's practically a DIY kit - except for ONE thing

No custom screws or heavy glue in ad-giant's mobe

Teardown The teardown team at iFixit has had a bad run of things lately, with Apple and Microsoft's shiny new fondleslabs earning very low ratings for reparability recently. But Google's new Nexus 5 has broken this trend, earning an eight out of ten rating for being easy to open and repair. 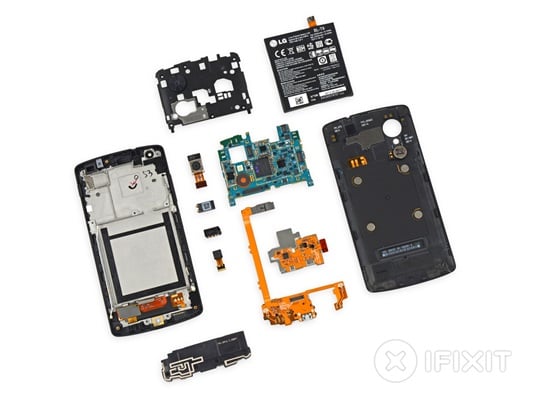 The Nexus 5 in pieces

The Nexus 5, manufactured by LG and launched on Thursday by Google, eschews the glued-down casings common with tablets in favor of plastic clips to hold the mobe together, with a dab of easy-to-beat glue at the base of the unit. This meant the iFixit team could open up the casing and get to its innards using just a trusty guitar plectrum.

Once inside, the Wi-Fi, MIMO, and GPS antennas are clearly labeled as such and the motherboard is covered by the phone's wireless charging pad (which also doubles as radiation shielding for the electronics) and a Broadcom NFC control chip. The phone's vibrating mechanism is lightly glued in, making for easy replacement, and this minimal approach to gluing extends to fixing the phone's 2300mAh battery in place. 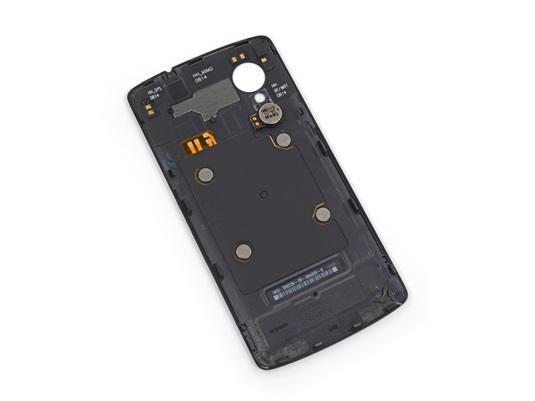 Simple to disassemble thanks to a lack of glue

"Google gives us the Goldilocks of glue: It's just enough to hold the battery in place, but not too much — the battery can still be removed with minimal prying and virtually no bending," the iFixit team said. "Non-LG manufacturers, take note! We don't want none of your 'that ain't possible' funny business when it comes to using glue in devices."

Getting into the guts of the device is easy, too. LG uses 10 standard Phillips-head screws to secure the guts of the device, unlike Apple which has its own custom screw design to make life difficult for people trying to repair their hardware. The speaker in the head of the phone is secured by a couple of screws and no cables, using spring contacts instead. 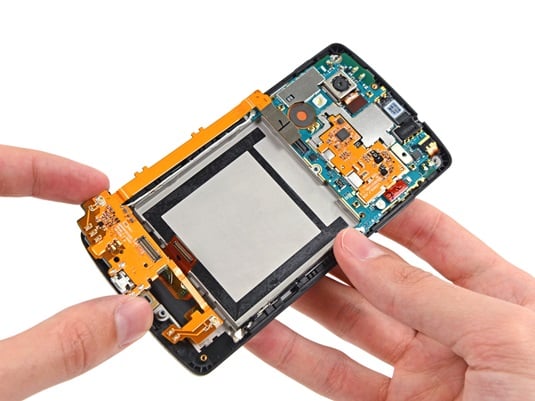 These contacts are mounted on a bright orange daughterboard, which also houses the microphone, RGB indicator LED, the micro-USB port used for charging and non-cloud data transfer.

The motherboard is a simple unscrewing job, and contains the phone's quad-core, 2.26 GHz Snapdragon 800 system-on-chip processor nestled under 2GB of SK Hynix RAM. Qualcomm also supplies the LTE/HSPA+/CDMA2K/TD-SCDMA/EDGE/GPS transceiver, audio codec and two power management chips on the main circuit board, with the attached dual-antenna Wi-Fi system coming from Broadcom. 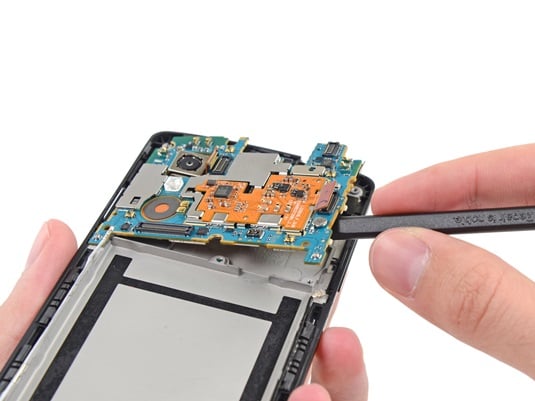 Motherboard unscrews with no muss or fuss

The iFixit team notes that the 1.3Mp front-facing camera and its 8Mp rear partner are both easy to remove, lightly glued and with cables that can be undocked with the minimum of fuss. The earpiece speaker and headphone jack are also easy top remove, meaning these parts can be swapped out and replaced if they fail.

However, the Nexus 5 lost points for its screen design. The 4.95" HD 1920x1080 display, which manages 445ppi, is fused into the casing, making it impossible to remove and replace either the screen or the glass covering it. "Imagine if one cavity meant losing all your teeth," the team notes. "Talk about a hard pill to swallow." 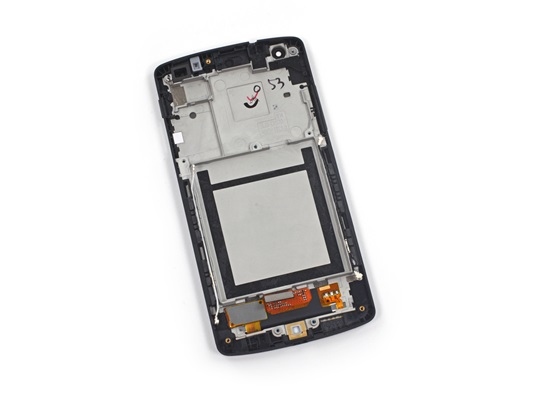 Break the screen or the cover glass and you're screwed

That one flaw aside however Google and LG should be rather pleased with iFixit's eight-out-of-ten score. The Nexus 5 is ideal for folks who like to have a rummage inside and repair their own hardware and, based on this teardown, that won't be too big an issue. ®