Honest Bob, it doesn't matter if we can trust you

Quatum cryptography is already useful in protecting “good” parties against interference from an evil outside world, but until now, it hasn't protected a “good” Bob from an “evil” Alice, or vice-versa.

According to the pre-press version of the paper at Arxiv, now published in Physical Review Letters, that can be overcome by using special relativity – specifically, the constraint of the speed of light – as the honesty-check on what Bob and Alice are doing.

“Bit commitment” is a cryptographic primitive, in which Bob creates a bit, communicates it to Alice – but doesn't “open the envelope” until a specific time. In its simplest form, bit commitment looks exactly like a secret vote, but it's a thornier problem than it looks at first glance:

To date, nobody's delivered a protocol based purely on quantum cryptography that can solve the bit commitment problem, so the researchers – from the University of Geneva, the National University of Singapore, the University of Cambridge, and Canada's Perimeter Institute for Theoretical Physics – created a mixed system using a combination of quantum entanglement and special relativity.

The quantum part of the system is familiar enough: a quantum key distribution system was set up in Geneva (Alice) to send bits that Bob detects in Singapore. The problem is that the time it would take in a purely quantum set up to send enough high-quality bits between the two ends of the link makes it impractical.

Instead, the experiment used a delayed-choice commitment: Bob first spends a little longer measuring the incoming stream of photons sent by Alice. He has to let Alice know which of the qubits she sent resulted in a “click” at his detectors – but that doesn't involve revealing his own decision. By then choosing a bunch of the detected qubits at random (without Alice knowing which ones), Bob gets a one-time-pad he can use to encrypt his decision, effectively “sealing the envelope”.

The experimental setup used is shown in the image below. The FPGAs' role is to implement the classical steps of the protocol. 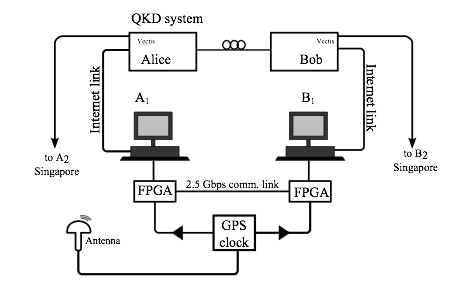 So where does the classical part of the system come into play? Special relativity defines the fastest that any party to the communication can communicate (that is, some number less than the speed of light: in this experiment, 21.25 milliseconds). Bob and Alice also have agents, and communicate some of what they know with those agents. With a high-accuracy clock overseeing what's seen by those agents, they system can be designed such that any “cheating” is detected, because neither Bob nor Alice can communicate instantly with their agents.

The researchers note that a provably secure bit commitment would be valuable in applications such as high-speed stock trading. ®