The DVDs to watch to celebrate 50 years of Tardis travel

Doctor Who @ 50 ‘Classic’ is a word that was already worn out back in the mid-1980s when fanzine editors and contributors couldn’t help themselves attach it to any Doctor Who story they were particularly keen on, whatever its merits. Thirty-odd years on, the word is no less overused, but the release of stories on VHS and, later, DVD has helped rub some of the rose-tinting off fans’ spectacle lens.

Three decades ago, we only had our memories and write-ups in Doctor Who Monthly to look back on. Now we can sit down and watch the stories we once thought were among the best the show’s various production teams had created.

Of course, we’re older now too, and most of us have more robust, adult critical facilities. Those of us who still appreciate the Classic Who era - that word again - can look beyond the poorly constructed sets, the OTT costumes and hyperbolic dialogue to the story the creators were trying to tell. Doctor Who in the 1960s, 1970s and 1980s will never escape the technological limitations of television at the time, but it is possible to look beyond them.

Here, then, are the ten Doctor Who stories, presented in alphabetical order, we think best showed the heights the programme was capable of reaching, despite low budgets, tight shooting schedules and no computer graphics to paint out the glitches. These are stories that hook you in with their ideas, their characters and, in some instances, even their presentation - or in spite of it.

If the 50th anniversary prompts feelings of nostalgia, you could do a lot worse than add these to your video collection.

The Ark in Space

Years before Alien, a ghastly creature slips aboard a sleeping space station and inserts an embryo into one of the human crew held in suspended animation. Time passes and the Doctor arrives just in time to deal with the larva, though not before it infects one of the now waking station personnel. The future of the human race is in the Doctor’s hands - can he defeat the insect menace and return the sleepers to their home?

We should get the bad stuff out of the way first: the flared trousers and the ridiculous sideburns; the green bubblewrap ‘infection’ encasing Noah’s hand; the way the otherwise well-realised Wirrn insects don’t actually walk on their legs; the way crew leaders Noah and Vira speak a kind of 23rd Century dialect, but crew member Rogin sound like a 20th Century wide-boy; the stupid-looking guns; would 23rd Century humanity really build the Ark out of expanded polystyrene?; why an alien that can subvert human cells by touch needs to bother with all that impregnation business; and, and, and... 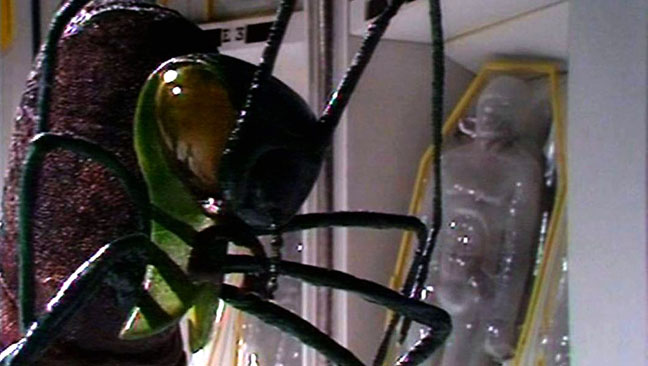 A bug hunt or a stand-up fight?
Source: BBC

None of which really matters because The Ark in Space - conceived by John Lucarotti whose script was then largely rewritten by Robert Holmes - is a cracking yarn. The Wirrn are a genuinely creepy monster and a race that, for once, is not trying to conquer the universe but merely obeying the rules of its own biology. The characters are engaging, and for all the naffness of Noah’s transforming appendage, his fight to retain his humanity while being Wirrn-ised is affecting and paves the way for his final act of self-sacrifice.

What we have here is an exemplar of how easy it was for Classic Who production teams to over-reach themselves. Realising the Wirrn and the transmogrification of human to insect were never going to be easy to do convincingly on Doctor Who budgets and timescales, but by golly they tried anyway. And it’s a testament to the writing and acting that they get away with it. You snigger at the flaws, sure, but you also enjoy the story.

Script Editor Chris Bidmead’s concept of the fifth Doctor was of an old man trapped inside a young man’s body: physically able but lacking the drive to make use of it. But in this, the fifth Doctor’s final story, he at last gets to make use of that physicality as he sacrifices his own life to save that of his companion, Peri.

Desperation drives the Doctor to the edge of madness. The clue is in the title: ‘andro’ is Greek for ‘man’, ‘zani’ is ‘zany’, a word which originally meant ‘clown’ but later became synonymous with ‘mad’. 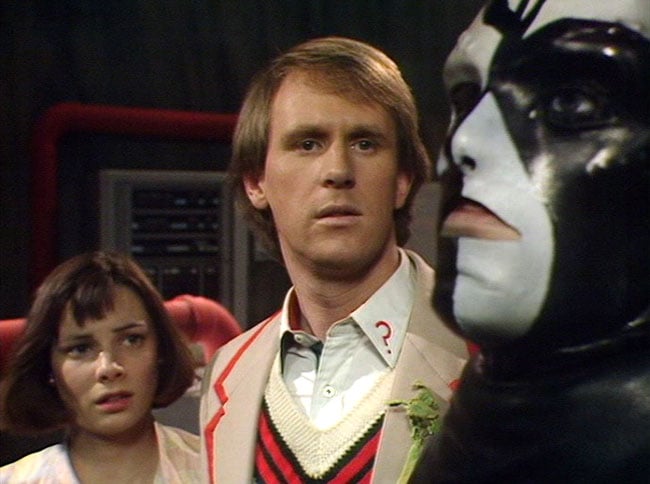 The Doctor, of course, has the inner strength to retain his sanity - he’s striving to save Peri, not to seek revenge. Not so the piece’s nominal villain, Sharaz Jek, who is driven round the bend and then some by the callous actions taken by the story’s real baddy, Morgus, his former business partner who has become rich by ruthlessly screwing over absolutely everyone he can: workers at his mines, his mercenary force, even the body politic of his homeworld.

Everyone here is truly screwed up. The population are in thrall to the drug Spectrox, which massively extends human life, to the exclusion of morality. Morgus is entirely solipsistic, as is Jek’s desire for revenge against him. Stotz’s mercenaries are, by definition, fighting for money not a cause, and even the real army is fighting a war of cynical political expediency.

The Doctor and Peri naturally stumble right into the middle of it all. Peri literally falls into a nest of the lethal pre-refined Spectrox, an accident which sets in motion every event that then takes place throughout the remainder of the story’s four episodes. It’s genius plotting on writer Robert Holmes’ part and it leads to a literally explosive climax - ably directed by Graeme Harper - as geophysical forces blast Androzani Minor and the Doctor undergoes an tumultuous regeneration.

Next page: The City of Death
Page: