A classy notebook - but can you live without discrete graphics or upgrades?

Review It’s true, as Rik Myslewski pointed out recently, that the two new MacBook Pro with Retina Display models aren’t drastically different from their predecessors. However, the eye-gasmic, 2880 x 1800 hi-res screen of the original 15-inch model helped it to win El Reg’s Laptop of the Year for 2012, so you could argue that it ain’t broke and it don’t need fixing.

The main difference between the previous 15-inch Retina MacBook Pro and this year’s update is simply that the 2013 model gains Intel’s new Haswell processor along with some housekeeping updates such as the inclusion of 802.11ac Wi-Fi, Thunderbolt 2.0 and a PCI Express (PCIe) interface for the solid-state storage. 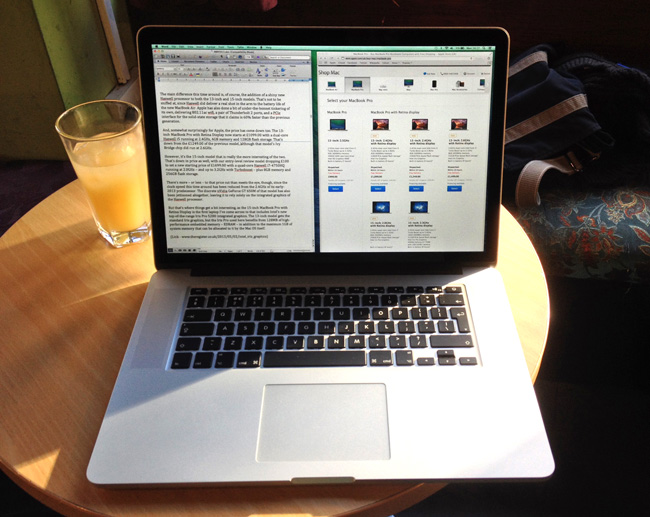 The external design is essentially unchanged and there’s still no denying that the screen remains its outstanding feature. The 15.4-inch IPS LCD panel may no longer be unique, but its resolution and 220 pixels per inch dot-density ensure that it remains one of the sharpest, brightest and most colourful displays I’ve ever seen on a laptop.

By default, Mac OS X presents the screen as a 1440 x 900 panel, using extra pixels to smooth the image, a trick it pioneered with the iPhone 4 and, later, the iPad 3. Those devices have fixed screen resolutions, but the MacBook Pro lets you trade that higher image quality for greater screen space, with the screen running to an effective 3840 x 2400 resolution if you want the maximum amount of display real estate.

That 4K-plus resolution - it’s virtual; the image is, of course, scaled down to the screen’s native 2880 x 1800 resolution, not that that you’d notice - makes the display ideal for graphics and video-editing work, huge spreadsheets and programming IDEs. I liked the fact that I could have Apple’s website sitting comfortably on screen alongside Microsoft Word in order to check specs while writing this review. 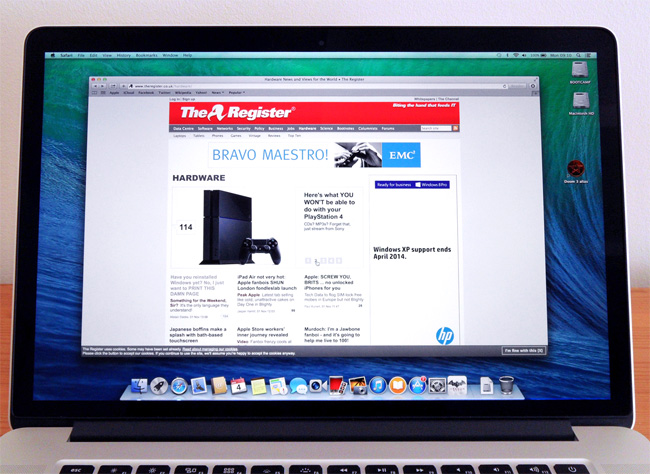 My one complaint here is that the glossy screen coating remains annoyingly reflective, causing distracting glare in broad daylight – as well as making it darn difficult to take photos of the screen.

The laptop’s thickness and weight remain the same as before: 18mm and 2.02kg, respectively. But, to be fair, the MacBook Pro with Retina Display is still one of the lightest 15-inch notebooks currently available. I can pick it up with one hand, and I didn’t find the weight particularly troublesome when I slipped it into a shoulder bag and ventured down to my favourite Wi-Fi equipped watering hole.

I was also reminded of the laptop’s impressive build quality. The aluminium-backed screen panel feels very firm and rigid – no tittering at the back, please – but is just flexible enough to absorb the occasional bump when you’re carrying it around. Apple craftily runs a large cooling vent right along the back of the bottom half the maching, where it is hidden from sight by the hinge of the screen panel. That said, the MacBook Pro ran cool and quiet throughout all my tests. 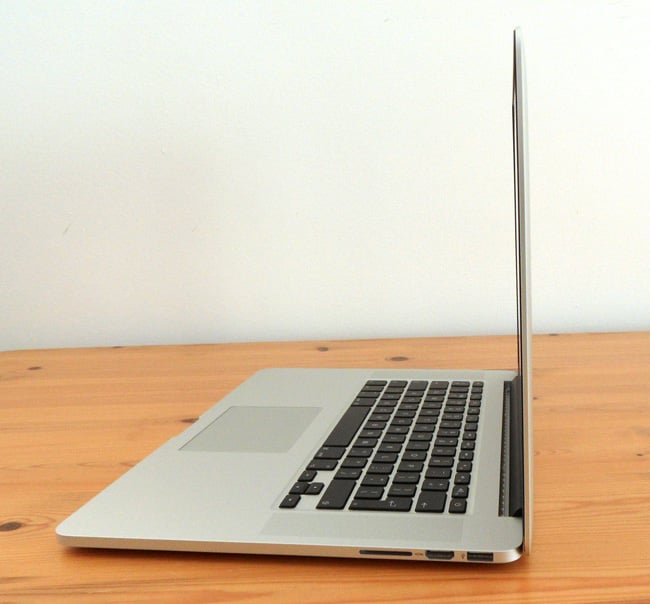 The downside of that elegant, minimalist design is that the MacBook Pro with Retina Display provides no scope whatsoever for upgrades. You can’t even get at the RAM slots, prompting the teardown team at iFixit to award the MacBook Pro just one out of ten for upgradeability.

There’s no Ethernet interface either, so you’ll have to pay £25 for an optional Gigabit adaptor if you need a wired network connection. It connects to the Thunderbolt port, which keeps the two USB ports free for other things. TV fans will appreciate the HDMI port, however, and there’s the usual SD slot for folk with digital cameras.

But that’s all business as usual for the MacBook Pro with Retina Display, so it’s the new Haswell processor that is the real focus of attention this time around. Prices now start at £1099 for the 13-inch model, which comes with a dual-core Haswell Core-i5 running at 2.4GHz, 4GB memory and 128GB of Flash storage. That’s down from the £1249 which Apple wanted for last year’s previous model, although that model’s Ivy Bridge chip ran at 2.6GHz.

The 15-inch model I have here gets a price cut too, down by £100 to a new starting price of £1699 with a quad-core Haswell i7-4750HQ running at 2.0GHz, 8GB memory and 256GB of flash storage. However, there’s more – or less – to that price cut than meets the eye. The clock speed this time around has been reduced from 2.4GHz to 2.0GHz, and the Nvidia GeForce GT 650M discrete graphics chip of last year’s model has been jettisoned altogether, leaving the machine to rely solely on the Haswell integrated graphics, an Iris Pro - aka GMA 5200 - in this case.