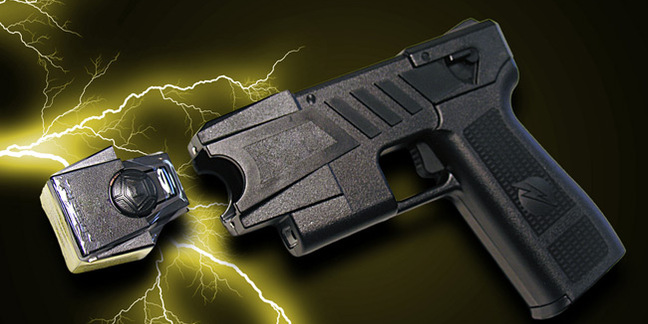 A Chicago Bears fan was cuffed on Monday night after allegedly giving his missus a right royal tasering - purportedly the result of a bet that the Illinois team would prevail over the Green Bay Packers.

According to the police report, 42-year-old John Grant and his wife Nicole - a Packers fan - were watching the two teams clash at a bar in Mayville, some 80km north-west of Milwaukee.

During a cigarette break in the alley outside the hostelry, Grant allegedly tased his other half three times, twice on her buttocks and once on her thigh.

Ms Grant called in the cops, although according to the cops, her husband insisted she'd consented to the shock treatment, having "made a bet on the Packers v Bears game that if the Packers lost, she would be tased".

The suspect alerted the boys in blue to a video clip on his wife's mobile phone, which showed her "laughing" and "standing still with her arms up and the male subject applies the Taser to her". This, and text messages on the same phone to Grant's sons at the beginning of the game admitting to the bet, led officers to conclude "Ms Grant had most likely consented to being tased".

Accordingly, Grant dodged a domestic battery charge. However, he agreed to allow cops to search the nearby truck where the pair were living. They quickly found his "stun gun type Taser", and he's now due before the beak on a "possession of an electric weapon" rap, which carries a maximum penalty of six years' jail and a $10,000 fine.

Luke, I am your father... which is why I must eject from JEDI decision, says US Defense Sec