Twitter #blabbergasm explodes as shares soar close to $50 on NYSE

A profit-starved Twitter saw its shares debut on the New York Stock Exchange today with a price tag $45.10.

The micro-blogging site, which earlier this week issued an explanation to would-be investors about what its service actually offers, set its initial public offering price at $26 last night.

First indications from the floor of the NYSE suggested that the price should open at $40 to $44 - similar to price range Facebook debuted with on to the Nasdaq in 2012, only to immediately slip as shares began trading.

Importantly, however, unlike the Nasdaq - which witnessed Facebook suffer a gigantic flop on Wall Street in May last year - the NYSE undergoes what it describes as a "price discovery" for companies immediately before they float on to the market. 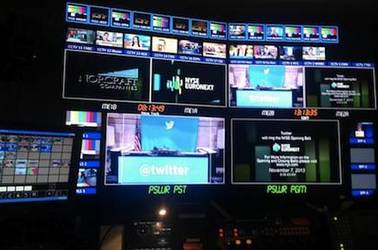 On Wednesday, Twitter tweeted, naturally, that it would be stuffing 70 million shares into the exchange on its debut to conjure up more than $1.8bn for the site co-founded by Jack Dorsey, Evan Williams and Biz Stone in 2006.

Underwriters also have an option - if demand is there - to buy 10.5 million more Twitter shares and offload them over the coming weeks. That move could net the company $2.1bn for its IPO.

At time of writing, Twitter stock was chirpily trading comfortably above the price range at close to $50 per share. But will the TWTR stock symbol still be happily sitting on its perch come closing time? ®