The social network that goes down on its users ... bitch

Updated Facebook users have been left in the dark as a chunk of the social network appears to be in the grip of a technical cock-up.

Folks have taken to Twitter (natch) to express their frustrations as profile pages have been unable to load for at least an hour. Users trying to access profile pages have met an error messages that simply reads "Sorry, but this page didn't load properly. Please try again." 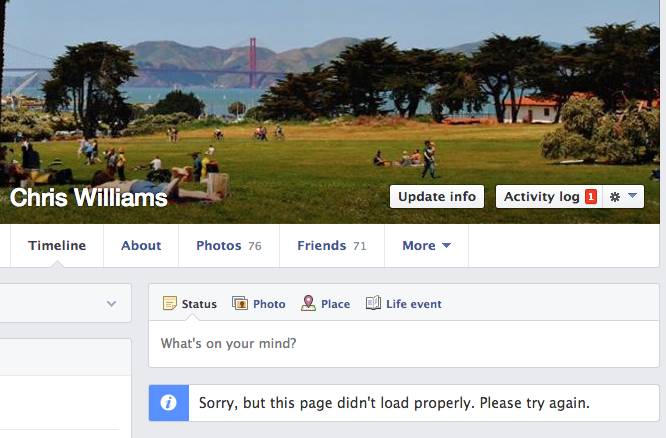 Nice profile ... would be a shame if something happened to it

Thus far there is no indication that the outage is the result of any sort of outside attack or breach. Other features, such as the news feed, appear to be operating as normal.

El Reg staff have been able to confirm the errors, and can verify that the issue appears to be impacting US and international users.

According to the social network, the issue and its cleanup are ongoing.

"We've received reports that some people are having trouble loading their Timeline and Pages content," a spokesperson said. "We're actively investigating this issue."

The outage will come at an inopportune time for Facebook in its battle to fend off rival Twitter, which launched a rather successful IPO yesterday on the NYSE. ®

We have been informed that the issue is resolved as of 10:00 PST.

"Earlier today, we experienced an issue that prevented some people from loading Timeline or Pages content for a brief period of time," read a canned statement. "We resolved the issue quickly, and content is back to normal. We're sorry for any inconvenience we may have caused."

Don't want the services? You'll still have to pay for them, activated or not
Offbeat11 Aug 2022 |

Technically the chip giant already owned the tech due to real inventor’s contract, according to DoJ
Legal11 Aug 2022 | 8