Devs tired of all the junk downloads, and no we DON'T mean the free software

The Gnu Image Manipulation Program, a popular and free Photoshop alternative that glories in the name “The GIMP”, has decided it can no longer permit itself to be downloaded from SourceForge.

The application's developers announced their decision here, arguing that SourceForge provides a user experience it can no longer support.

“In the past few months, we have received some complaints about the site where the GIMP installers for the Microsoft Windows platforms are hosted,” the developers write.

“SourceForge, once a useful and trustworthy place to develop and host FLOSS applications, has faced a problem with the ads they allow on their sites - the green 'Download here' buttons that appear on many, many adds leading to all kinds of unwanted utilities have been spotted there as well.”

A quick visit to SourceForge sustains the claim. Vulture South dropped in to download the useful FileZilla FTP tool and found the ad below.

That ad won't fool hardened and cynical Reg readers who if they chose to follow the link to the site offering the chance to “READ NOW YOUR FAVORITE BOOKS, MAGAZINES & COMICS FOR FREE” would back away quickly. Less experienced surfers? We shudder to think. 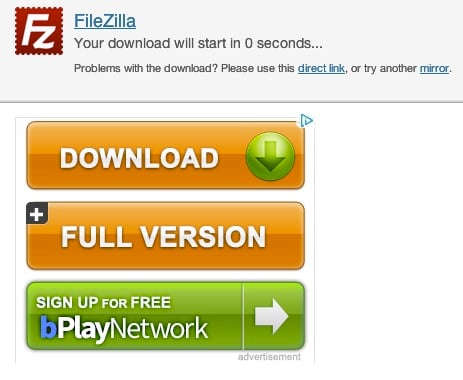 The ads weren't The GIMP devs' only beef, as they were willing to tolerate them until SourceForge's new Windows installer came along. As the devs note, that tool “... bundles third-party offers with Free Software packages. We do not want to support this kind of behavior, and have thus decided to abandon SourceForge.”

The outfit now hosts its own mirrors, with downloads available here. ®