Norks unlikely to beat the USA in the death-ray race

The long, slow march to a practical pulse bomb

With the world once again excited about the prospect that North Korea is on the way to building electromagnetic pulse (EMP) bombs, it's worth noting that in the last 15 years or so, America's much more sophisticated development effort has yielded relatively little.

In fact, The Register would go so far as to say that far from being an “existential threat” to America, the Norks haven't yet got as far as being an existential threat to this year's round of Christmas gadgets rolling out of South Korean factories, its sabre-rattling aside.

The principles behind an EMP bomb are very easily understood: if you can release a very large amount of electrical energy over a very short period of time – think milliseconds or, better, microseconds – you'll produce an electrical pulse that fries any unprotected electronics within a given radius.

And it's not too hard to demonstrate the principle at a small scale: there exist any number of maker projects that claim to turn bits out of an old microwave oven into a (nearly) portable high-energy radio frequency (HERF) gun. Since among other things you need to be competent at working with high voltages, Vulture South does not recommend readers try it at home.

EMP effects from nuclear explosions are well known. But for an EMP to be an “existential threat” to anyone, without the risk of sparking an immediate military response, a practical EMP needs to be non-nuclear.

An EMP based on conventional explosive also needs to deliver a large enough pulse that it can wreak electronic havoc in an area far larger than the lethal radius of its explosive. There's no point in frying all the electronics within (say) a 250 metre radius if you've also blown up the same area.

That's not trivial: one design principle (increase the pulse by increasing the energy released, that is, make the bomb bigger) is contradicted by the other (make the blast smaller, relative to the EMP radius).

And that's probably why images like the one below, popular in articles describing EMP bombs, come without a scale-bar. Sure, publishers like the IEEE don't want to expose military secrets, but it's likely that at the current state of the art, the “pulse radius” isn't that big. 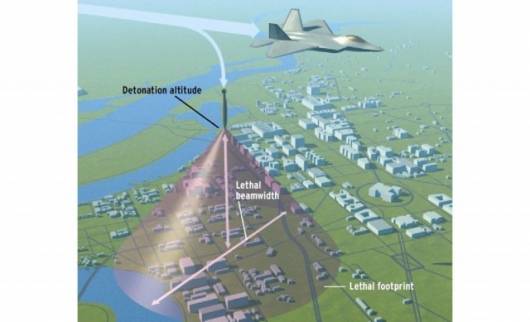 How Gizmag illustrated EMP devices in 2009.

The pulse bomb has been “imminent” pretty much throughout my career as a journalist. America has said the most about it, but even then, pulse bombs have done much more environmental damage via wasted energy and newspapers than they've achieved in warfare.

In a non-nuclear EMP weapon, the idea is to use explosives to impart a huge magnetic flux to an inductor in a very short time. The problem is that the process is relatively inefficient.

An EMP bomb has two footprints from an electronics point of view: close by, it will fry electronics directly; further away, pulses picked up by electrical wiring and network cables will destroy connected equipment.

The pulse needs lots of portable energy – in the order of Terawatts – so you have to be good at extracting electrical energy from the explosion, and aiming the pulse at the target.

Even in America, a lot of research over decades hasn't produced anywhere near as much development as the hawks would like or want. That image from Gizmag was lifted from IEEE Spectrum dated 2003, and it had my memory working overtime, because it seemed to echo an image that appeared in a print magazine I worked for some years earlier.

The IEEE's 2003 illustration of a pulse bomb

A closer look at the IEEE image reveals that it's based on the below image, among other things provided by military commentator Carlo Kopp to print magazine Open Systems Review in the late 1990s.

In other words, in illustrating an EMP bomb, the illustrious IEEE didn't see any need to update a ten-year-old design concept, beyond giving it more up-to-date graphics. That's how fast the technology is advancing.

Not only is Norks working from a standing start (even if, as reported, it is reverse-engineering Russian kit). It's also been “getting close to” a pulse bomb for at least a couple of years. Here's how ABC (America not Australia) reported it in 2011:

“South Korea's minister of defense at that time had reported to the Congress, warning that the North poses "a fresh security threat" capable of disrupting guided bombs and missiles by sending signals over a distance of up to 60 miles.

Some modern weapons are equipped with an alternative guided system in addition to GPS, which means the bomb would find its way to the target even if it loses contact with the satellite.”

The Register believes that a "60 mile" radius wouldn't just represent a catch-up: it would mean Norks has leap-frogged the rest of the world.

“The South Korean military will have an electromagnetic pulse (EMP) bomb in five years that is capable of crippling an enemy's command-and-control, communications and defense radar systems.”

That's a more limited claim: an expectation that if the pulse bomb were delivered to the right place, it could take out systems in that place.

It's no wonder that journalists are keen on finding North Korean EMP weapons, though: they've been primed to look for them by the National Institute of Public Policy, which published this paper in 2007.

What's interesting about that paper, at least to this author, is that it focuses mostly on the use of low-yield nukes as EMP weapons. The EMP Commission in the US still considers nukes the most practical form of EMP bomb. ®

Times are strange when spies talk about infosec and economics colliding

It's a bird! It's a plane! No, it's two-dozen government surveillance balloons over America

Back at base, bugs in the software. Flash the message, 'Something's out there'... Floating in the summer sky, 99 Fed balloons go by