The electron has delivered up a huge disappointment to fans of the “new physics” by being too round.

Unfortunately, the electron's spherical symmetry – demonstrated most recently by a highly sensitive test performed by the Harvard-led ACME collaboration – has now been repeated with ten times the sensitivity of any previous measurement, and is reported in this paper at Arxiv.

The ACME collaboration's measurement says the electron is spheroidal to within 1 x 10-29 of a centimetre (why the boffins didn't express it metres, Vulture South is unsure).

Why is this a problem for “new physics”? Because the very, very, very spherical electron fits the predictions of the Standard Model better than more exotic theories.

The Standard Model's prediction that the electron be spherical (to particle physicists, this is described as the electron's Dipole Moment – near or at zero in the Standard Model) is at odds with theories that predict a great many more fundamental particles than physicists already work with (predicted in some versions of supersymmetry, for example).

As a lepton, the Standard Model electron should have a dipole moment near zero, because it's an elementary particle that isn't made up of smaller critters. Other theorised particle zoos have smaller and stranger critters than we've detected so far, and that would leave the opportunity for a slightly-squashed electron.

As Scientific American puts it:

“According to quantum mechanics, all particles, including the electron, should give rise to a cloud of virtual particles around them that continually sweep in and out of existence. If the standard model is all there is, then these virtual particles would be everyday, run-of-the-mill particles. But if more exotic particles are out there, they should pop up in the virtual clouds around electrons, causing the clouds to be asymmetric—in other words, causing an electric dipole moment.”

To get the measurement, the group sent the ThO molecules into a magnetic shield, used optical pumping to spin them, and used an alternating laser to read the final spin alignment. This is shown in the figure below. ® 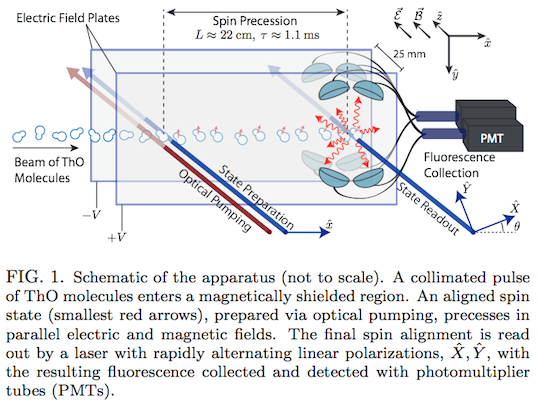