AIR TIME! Our expert cosies up with the new top-end iPad

Review The reception that greeted the launch of the iPad Air was rather more muted than the gangbusting opening weekend of the iPhone 5S. Sure, it was slimmer and lighter than its predecessor, and had a faster processor, but that’s the sort of thing you take for granted with any update. 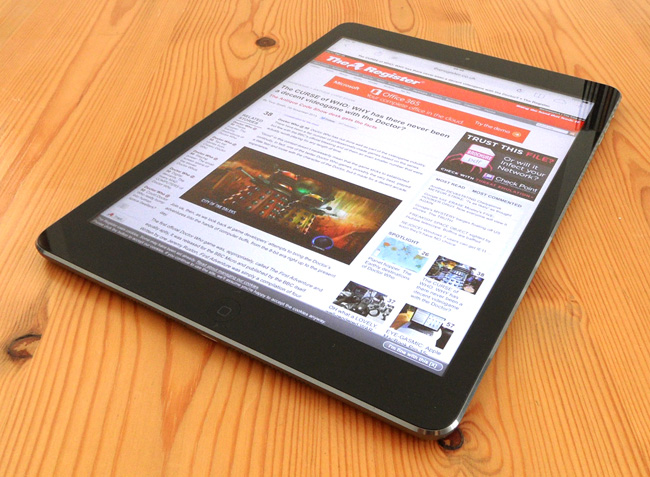 The numbers aren’t terribly exciting, but when you get your hands on the iPad Air, its more compact, lightweight design does impress. I’m the happy owner of a third-generation iPad. It hasn’t replaced my laptop for work, but when I’m at home the darn thing is pretty much grafted onto the end of my arm.

But I didn’t feel any great need to upgrade to the iPad 4 last year, as that was essentially just a speed bump and added a new connector, Lightning. The iPad Air, however, does have the lust factor that sets my credit card a-quivering in my pocket. 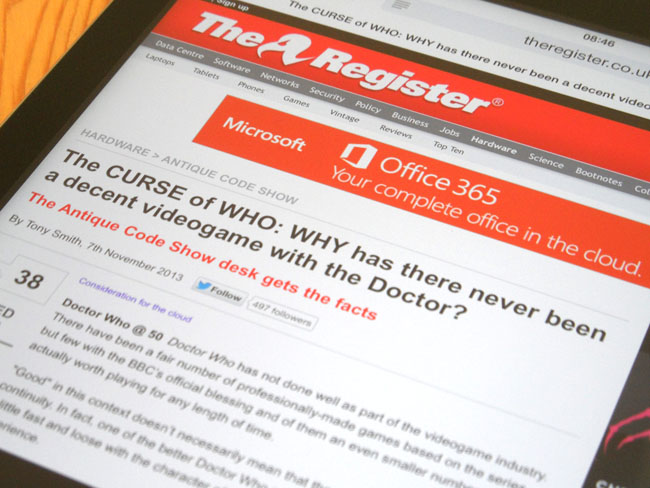 In actual fact, it was the size rather than the weight that took me by surprise. The iPad Air is noticeably narrower than my iPad 3, and I had to whip out a ruler to convince myself that the Retina screen was still the same size as before.

The anti-scratch screen overlay on my iPad 3 is too big to fit onto the iPad Air, and the sleeve that I carry my iPad 3 around in is far too loose to hold the iPad Air securely, so that’s another bunch of accessories you’ll have to pay for if you upgrade.

The reduced weight is clearly noticeable too. I can hold my iPad 3 in one hand quite comfortably when I’m browsing the web or reading an ebook, but there are times – those long sessions with Plants vs Zombies, say – when I need to shift the weight from one hand to another. That’s no longer the case, and the weight of the iPad Air now seems to have passed some sort of threshold that makes it feel completely natural to hold and use for extended periods of time. 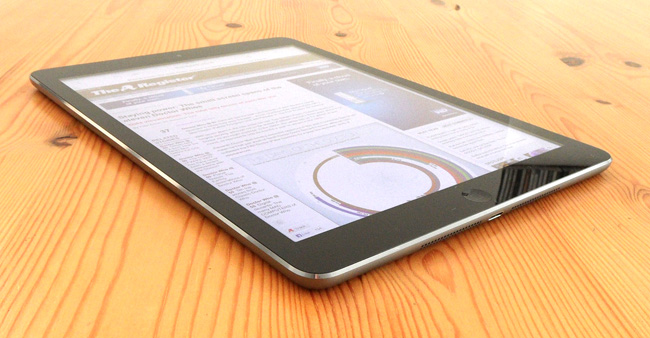 The best Apple products have always had a tactile quality that makes you want to pick them up and admire the elegance of the design, and the iPad Air has got it in spades. You can feel the cleanness and precision of the aluminium casing, and the metal buttons that lie almost but not quite flush with the surrounding panel. There are cheaper Android tablets by the score, but few that match the build quality and classy elegance of the iPad Air.

And while it’s hard to quantify, I got the impression that the already excellent “Retina” display was just a little brighter and sharper than that of my iPad 3, with better contrast that produced crisper blacks on text. DisplayMate Technologies analyst Ray Soneira reckons the Air uses Sharp’s IGZO screen tech for a thinner, more power-efficient panel, but Apple has yet to confirm this.

The touchscreen seems more sensitive too, reacting to the lightest of finger-flicks when I want to see notifications or the iOS 7 control centre.

My only concern is that the thinner casing might not be as sturdy as that of its predecessors. It feels rigid in your hand but I’d worry more about dropping the iPad Air than my iPad 3. A protective cover would seem like an essential accessory for this model.

Next page: Walking on Air
Page: