Server, server in the rack, when's my disk drive going to crack?

Backblaze's 25,000-drive study scries the future of your storage

Cloud backup outfit Backblaze has cobbled together all the data it's gathered from the 25,000 or so disk drives it keeps spinning and drawn some conclusions about just how long you can expect disks to survive in an array.

The study's not the best of guides to data centre performance, because Backblaze happily makes do with consumer-grade drives. As even those drives routinely offer mean time between failure (MTBF) in the hundreds of thousands of hours – decades of operation – or the storage industry's preferred longevity metric of annualised failure rates (AFR) of under one per cent per year, the study tests those claims as well as any other. It's also rather more recent than the 2007 studies from Google (PDF) or Carnegie Mellon University.

Backblaze's study finds that both AFR and MTBF are bunk. The document finds that disks follow the predicted “bathtub” curve of failure: lots of early failures due to manufacturing errors, a slow decline in failure rates to a shallow bottom and then a steep increase in failure rates as drives age. 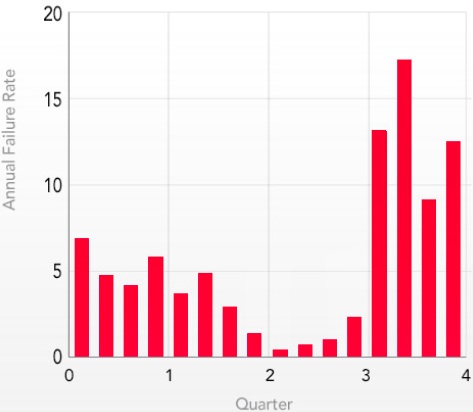 The study then looked at when drives fail and found a drive that survives the 5.1 per cent AFR of its first 18 months under load will then only fail 1.4 per cent of the time in the next year and half. After that, things get nasty: in year three a surviving disk has an 11.8 per cent AFR. That still leaves over 80 per cent of drives alive and whirring after four years, a decent outcome.

Backblaze promises to compare consumer-grade and enterprise-grade drives in a future study, which will be interesting if it reveals the premium paid for the latter makes little difference to longevity. Whatever the outcome of that study, this one shows that disk-makers' claims for longevity need to be taken with a decent pinch of salt. ®