Archaeologic If you’re a British techie of a certain age, there’s only one microcomputer that defines your first memories of computing at school. No, not Acorn’s BBC Micro – the Research Machines 380Z.

While Acorn was still knocking up the Proton, the machine being designed as the successor to the Atom, and while the BBC was pondering how it might possibly inspire Brits with the Joy of Hex, a number of far-seeing schools and colleges had already begun putting micros into kids’ hands. Most of them were doing so with Oxford-based Research Machines’ 380Z, a Z80A computer in a big black box with two handles on the front and clearly intended to be slotted into scientific instrument racks. 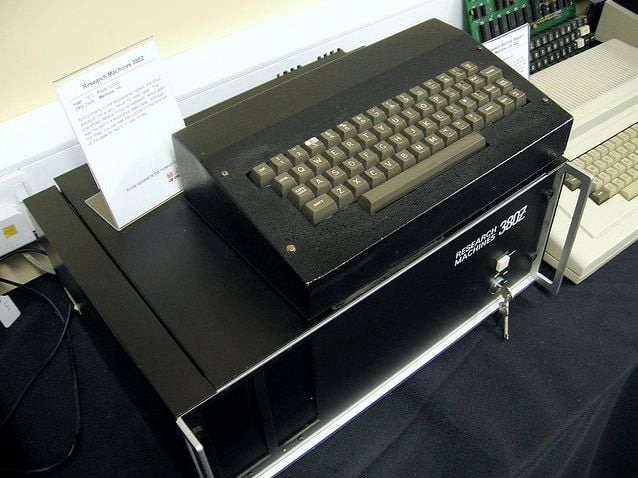 The 380Z was the first computer I ever used to write programs – a rather poor text-only adventure, since you ask – though it was mostly used to play Space Invaders and a version of Computing Today’s RPG, The Valley. It wasn’t a colour computer, so it was soon supplanted in my imagination and those of my schoolmates by the Spectrum, the BBC, the Dragon 32, the Commodore Vic-20 and others.

Little did we know that the 380Z – along with its by then long-defunct sibling, the 280Z – was a pioneer of British microcomputing. In 1982, at the time I was first experimenting with Basic, the 380Z was already more than five years old.

It had already outlasted the early board computers it was launched alongside. It had survived the arrival of newer, low-cost cased machines like the Tangerine Microtan 65 and the Science of Cambridge ZX80. It had held its own against those slick US imports the Apple II, the Commodore Pet and the Tandy TRS-80 Model I.

Even in 1982, then, the 380Z was a veteran. It was a survivor. And it would live on for another three years, through the introduction of its successor, the Link 480Z, which débuted in 1982. This, then, is its story.

The tale starts in 1973, when two youngsters, Mike Fischer and Mike O’Regan, decided to enter the electronics business.

Fischer was the technical one. He was a physics graduate who’d come out of Oxford University in 1971. Even then he had a mind to establish some sort of electronics company. It was an area he was keenly interested in. But he had been advised by a friend’s father, who happened to be an American patent lawyer, that he should go off and travel for a few years first before allowing himself to be tied down to running a business. Unlike the British parents Fischer met, his American advisor could appreciate not only the value of entrepreneurial ambition but also just how much work success would require.

Fischer took the advice to heart and spent the next couple of years in Africa, before returning the Britain to face the challenge of earning a living in 1970s Britain. Finding one led him to employment agency Manpower in Swindon and from there into an apprenticeship as an electrician.

And then he got a call from Mike O’Regan. This second Mike – "Mike O" to his pals – had studied economics at Cambridge. He hadn’t really enjoyed the subject and had only done it at all because, he says now, his careers guidance culminated in a choice of economics or law. Law, he feared, might involve too much Latin.

After university, O’Regan travelled in Spain for a time and then, like Fischer, returned home to try to earn a crust. He did temporary jobs, one of which had him teaching at a Sussex school for boys who had clear aptitude but were not realising their potential, typically because of disadvantaged backgrounds, behavioural issues, or ailments such as dyslexia.

Mike O enjoyed teaching, an occupation he had already experienced during a gap year spent in Uganda where he taught native kids English and maths. The son and grandson of teachers, O’Regan had an affinity for education, but it wasn’t, he then felt, where his future lay.

By chance the school brought him into contact with Mike Fischer’s brother, with whom he became friends. He got to know the Fischer family, and it was therefore obvious that when Mike Fischer came back from his travels and established himself in the electrical business, he should try to help out his brother’s pal, who was looking for something to do next.

Mike O met Mike F, who introduced him to Manpower. The agency set him up doing forklift driving and working as a fitter’s mate. Fischer put him up in his flat, and in the evenings they would pop out for a pint or two and ponder their futures.

They soon discovered in each other a desire to work for themselves, says O’Regan. He wasn’t sure what he might want to do, but Fischer was clear: he wanted to do something that related to electronics. Mike O was fine with that, and the two agreed to go into business together.

The result was essentially Research Machines, established to build, naturally, machines for research. "RM" was a bit like "IBM", and the ambitious youngsters thought they might one day become the Big Blue of scientific equipment. This emphasis prompted the pair to leave Swindon for Oxford where Fischer had contacts in various colleges’ physics departments. 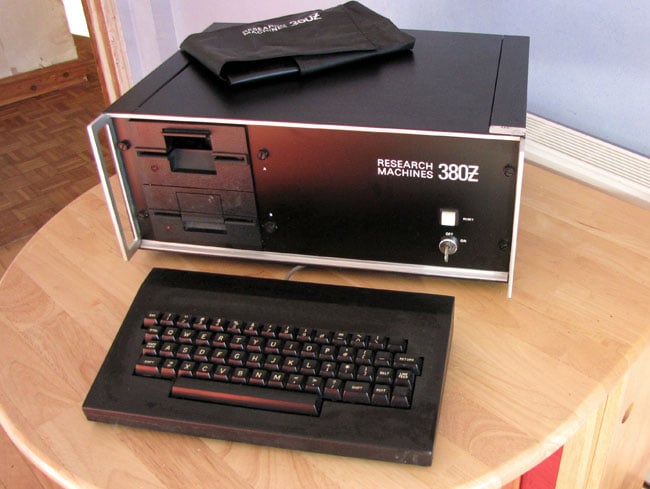 The 380Z in its classic configuration
Source: Paul Flo Williams

One of their first contracts, Fischer recalls, was to build an electroencephalograph machine to analyse rats’ sleeping brainwave patterns. O’Regan says that allowed them to formally establish Research Machines as a company, set up the requisite bank account and get a cheque book. It made their business legitimate. He also recalls an attempt to win a £10,000 instrumentation prize. His partner sought out contract work from his university contacts and this led to further projects with a scientific bent.

Fischer admits neither he nor O’Regan had any managerial experience - or, more to the point, much in the way of capital. Mike O remembers the pair working evenings as telephone operators to help make ends meet. “All the hours we put in on the first product meant we essentially made three pence an hour for it,” remembers Mike O. They managed to persuade their client to put up £600 in advance - and the bank to put up a similar sum.

To make Research Machines work, they realised, they needed more solid financing than that provided by the contract work. The upshot was the formation in 1974 of a Research Machines subsidiary to sell electronics components.

Next page: Sintel inside
Page: