They wanted to call it Sigma Electronics, but there were too many firms named Sigma already, so the new operation became Sintel. Recently established in the UK, Intel, then a much, much smaller company than it is now, grumbled and threatened, but the lads stuck with the name. Fischer was soon hacking together project kits, such as digital clocks, which Sintel could pitch through ads in magazines, and in articles written for the likes of Practical Electronics too.

Sintel drops a hint: it’s working on a new computer

It was good experience for what was to come. They made mistakes, says O’Regan, for instance ordering far more National Semiconductor clock chips than they were then able to sell – they were able to cancel the order in the end – but running Sintel proved a straightforward endeavour, he says. While Fischer handled the technical stuff and headed the company, Mike O looked after sales, admin and the accounts – though not, he insists, because of his economics degree, which had given him no practical business skills at all.

“We were quite successful, by our standards, at selling kits,” says Fischer. “But I’d gone back to college to do a degree in physiology because I wanted to do something in medical research, so I wasn’t designing any more kits.” That prompted a discussion about the company’s future. “We decided we either had to become a commercial component supplier, like Maplin or a distributor, and build Sintel up as a business - or to manufacture something.”

The MITS Altair computer kit had come out in the US at the end of 1974, and this provided the inspiration for the RM founders’ next step. Designing a complete computer seemed only a small step up from designing clocks and such, so Fischer and O’Regan decided to follow the second of their two possible business plans and, as they put it, “make something”.

By now Sintel also had contacts in education, among them a couple of chaps in Reading who were computing advisors to Berkshire County Council and were at that point trying to build a computer that might be used in schools. They were buying their components from Sintel. It occurred to that it might be easier simply to get Sintel to design the whole machine for them.

That struck a chord with RM’s founders. Though the two Mikes realised that the future was clearly going to be in general-purpose computing, business machines in particular, they believed they couldn’t grow fast enough to become a long-term player in that part of the market. So eduction would be their focus, “a niche in which we could survive”, as Fischer puts it today. O’Regan’s UK teaching experience also gave him an insight into what kind of product schools might want.

Before then, RM’s first machine had to be created. The 380Z was designed by Fischer himself. His goal, he says, was “to bring out something that had the most advanced chips that money could buy and not worry about the cost because in a year the cost would have come down”. At the time, he was living in a house on Oxford’s Iffley Road, and Sintel was being run out of the property’s basement. Fischer created the 380Z in his bedroom, he and his wife moving back the bed every morning to make room for the trestle table upon which he would then continue to wire-wrap the components and motherboard.

Fischer selected the Z80 processor because it was a more advanced version of the Intel 8080. The development of both chips was led by Frederico Faggin, first at Intel then at Zilog. The 8080 had been used in the Altair and by 1976/77 there was plenty of software available, among it Digital Research’s CP/M operating system. Fischer also liked the Z80’s ability to automatically refresh the computer’s DRAM. It required fewer ancillary chips than the 8080 did.

“There were quite a lot of innovations to keep the component count down,” recalls Fischer. “We had quite a lot of inventions in terms of how you use chips to make a microcomputer which had we patented them at the time we’d have made quite a bit of money. But in those days no one did any patenting. Lots of the things we came up with were used in many other computers, including the IBM PC. In fact, we always paid a lower royalty to IBM than other manufacturers did on the grounds of not having to fight about patents. That was worth millions of pounds.”

Back in the mid-1970s, the electronics business was a cottage industry serving a small community of enthusiasts, many of whom met up in small clubs. Magazines like Practical Electronics and Electronics Today International (ETI) were written by and for devotees. Suppliers spoke directly to their customers through the ads they placed in those titles. The adverts were there to sell product, sure, but they were a combination of newsletter and message board too. 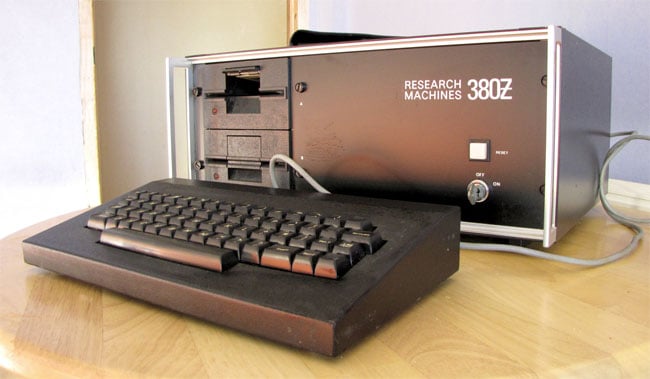 Most punters were expecting a board computer, not a cased one
Source: Paul Flo Williams

So it was no surprise that adverts placed by Sintel to appear in magazines published in May 1977 would, in addition to the long lists of available components available for sale, mention that the “Sintel Z80 computer” would be “coming in a few months... in kit form and ready built”.

“We think it’s worth waiting for,” the ad said enthusiastically.

ETI’s Gary Evans, an electronics journalist covering the new, emerging microcomputing scene in the mid-1970s, seemed impressed too, having seen an early prototype of the Sintel machine at the first European DIY Computer Conference, held in May 1977 at the Institution of Electrical Engineers’ HQ in London.

“Among the firms with their products on display were Sintel, who were showing a new Z80-based system which they hoped to market in kit form later this year,” Evans wrote. “Amongst other interesting features, this system has a very versatile VDU.”

Next page: Building the 380Z
Page:

Upcoming restructure at Arm to focus on 'non-engineering' roles