Back in Oxford, work continued on the Sintel micro through the summer of 1977, primarily on its firmware. At the same time, in London, contractor Chris Shelton was designing the Nascom 1 for John Marshall’s Lynx Electronics. And gifted amateur Ian Williamson was hacking together old Sinclair calculator parts to produce a microprocessor programming kit that would inspire Science of Cambridge’s Chris Curry to launch the MK14 - Sinclair’s first computer product.

The 380Z firmware was primarily developed by David Small, who at that time was working as a neurology researcher but was discovering that he was far more interested in writing machine code programs for the DEC PDP-11 he had access to back at the lab. Fischer recruited him for the 380Z, for which he wrote the BIOS and on-screen monitor program resident in the 380Z’s 2KB of ROM. 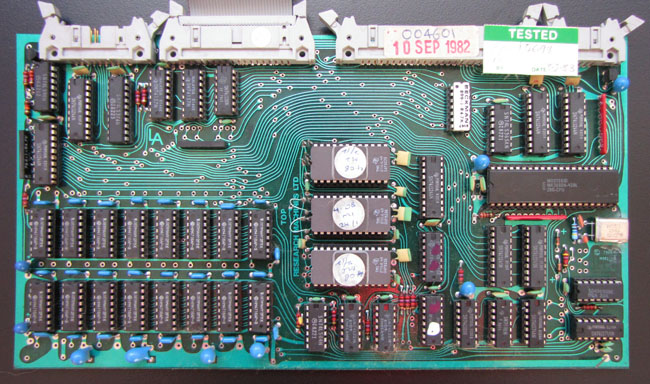 The 380Z motherboard as it had become by 1979
Click for a larger image
Source: Paul Flo Williams

Small would soon join Research Machines full-time and become a shareholding company director. However, he and Fischer fell out in the early 1980s over his role in the company and he left to found High Level Hardware. In 1982, Small's firm announced the Orion, a 32-bit “high performance personal computer... designed primarily for the scientific community”. It was arguably Britain’s answer to the NeXT Cube, but it came two years in advance of Steve Jobs’ post-Apple offering.

Despite the break, Fischer still lauds Small’s coding skills: “He’s probably the best programmer I ever worked with. He’d pitch up with 4KB of machine code that he’d written on PDP, and we’d debug it and find maybe five bugs.”

Fischer himself specified the 380Z firmware and contributed code of his own: the cassette operating system, for instance. For reliability, he coded the machine to save two copies of the data, so if the first couldn’t be read, it could try to load the second. Another Oxford university find, Steve Cope, wrote the built-in full-screen text editor. Fischer’s physics department friend Bob Jarnot built an EPROM programmer to burn the firmware onto chips.

Sintel was ready to announce its new machine in August 1977. “We will be offering two different packages,” the company’s ads said. “The first system, the Research Machines 380Z, will be available built and tested and also in kit form. This is a fully independent computer system used in conjunction with a television and cassette recorder.

“The second system, the Research Machines 280Z, will be available in uncased kit form, with a low-cost keyboard. The RM 280Z is designed to set a new low in computer systems pricing and it will bring a full computer system within reach of many more private computer enthusiasts.

“These computers are designed and manufactured in Oxford by Sintel’s parent company, Research Machines Limited, and will be sold through Sintel.”

Next came the promised spec: “The 380Z has a UHF output which plugs into the aerial socket of a completely unmodified domestic television. The TV screen will then display 24 rows of 40 characters... including upper and lower case.” The character set was the 128-character ISO 7 standard; the 380Z also used the standard Kansas City 300bps cassette system.

“The computer is housed in an instrument case with power supply, and a lot of room for expansion,” said Sintel, and added that the machine’s base 4KB of Ram could be upgraded to 32KB “without adding any memory PCBs”. The 380Z would come with a “keyboard in a separate case”.

The casing, incidentally, was simply what RM could get hold of. Originally released in white and blue, it used an off-the-shelf instrument housing from Vero, a maker of components. “We had to add lots of bits of perspex with double-sided tape to stop the sides bending!” recalls Fischer. So it was soon replaced with a custom version of another Vero casing, tweaked to add the familiar handles and key lock. The idea of putting a lock on the front of the box was “probably pinched off a PDP-8,” Fischer reckons.

At this stage, Sintel wasn’t say how much the machine would cost, but few readers would have assumed it to be cheap. Today, 32KB of memory doesn’t sound very much at all, but the upgrade would have added many hundreds of pounds to the price of the base machine, and even 4KB wasn’t considered inexpensive.

The Nascom 1, for instance, had just 2KB, half of which was used as video memory. The MK14 had just 256 bytes of RAM. Memory was expensive, and it was clear that the 380Z would be too. To cater for punters on low budgets, Sintel also announced the 280Z, which, it promised, would “cost somewhere between the price of a manufacturer’s Development Kit using hex display and keyboard, and a fully cased computer system”. In short, it was the 380Z’s VDU board and motherboard but with less memory, no keyboard and no power supply. 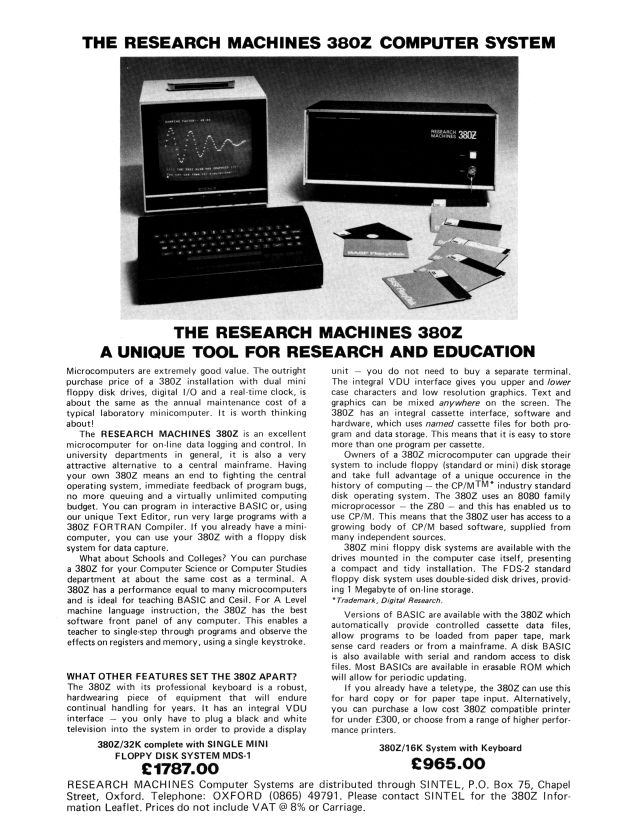 The following month, Sintel talked up the “very versatile VDU” that ETI’s Gary Evans had enthused about after seeing the prototype: “Each character position on the VDU is written in to and can be read by the CPU as a memory location. This means the VDU is software controlled and can be programmed to operate in any mode, including page mode, scrolled, immediate mode editing, or fully addressable cursor. The whole VDU can be filled with new data in less than 10ms! Screen refreshing does not use any of the Z80’s time.”

All the prices I’ve mentioned were less eight per cent VAT, of course.

Next page: For schools and colleges
Page: