A black hole has been spotted spurting out streams of iron and nickel, seeding the universe with heavy atoms that are part of the building blocks of planets, asteroids and stars. 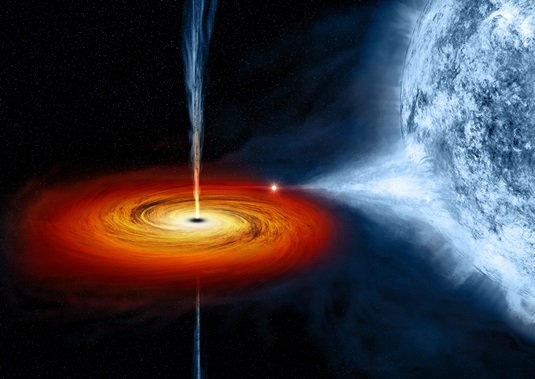 First I pull it in, then I spit it out ... Artist's impression of the hole in action

Typically, black holes put out jets of charged particles, thousands of light-years long, which disperse into surrounding galaxies. However, this is the first time a typical black hole has been spotted pumping out heavier atoms, such as nickel and iron, at two thirds the speed of light. Those two elements in particular make up much of the composition of one of the main classes of asteroids, as well as being abundant in rocky planets like Earth.

The European Space Agency's XMM-Newton space telescope snapped the black hole, dubbed 4U1630-47, spewing out jets of the material, and the findings are backed up by the Compact Array radio telescope in eastern Australia run by the Commonwealth Scientific and Industrial Research Organisation (CSIRO).

"Heavy atoms have been seen in jets from one other system, SS433, but that's a very unusual system, an oddball, whereas this system is quite typical, much more likely to represent black holes in general," CSIRO's Dr Tasso Tzioumis, a member of the research team.

The black hole is a dainty little thing, only a few times the mass of our Sun, but of a common type across the universe. Scientists are now looking at how these jet streams could affect galactic system development.

"Jets from supermassive black holes help determine a galaxy's fate - how it evolves," said Tzioumis. "So we want to understand better the impact jets have on their environment." ®