Want to BUILD YOUR OWN Tardis? First, get a star and set it spinning...

The missing 70 per cent

Dark energy was only postulated after it became possible to accurately count the number of galaxies and their position, and – therefore – to see how they are moving. This took place 20-30 years ago, long after Einstein’s time. 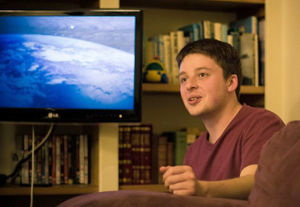 The degree to which massive, galactic gravities bend beams of light - a distortion predicted by general relativity - is greater than the observable amount of matter in those galaxies. That suggests the presence of another, directly unobservable substance that accounts for the extra mass and thus the extra gravity. Cosmologists call this material ‘dark matter’.

There’s a lot of this exotic material around: about 70 per cent of the universe is now thought to be made of dark matter, according to NASA. If the ‘dark stuff’ theory is correct, almost three-quarters of the universe can’t be seen directly.

Some scientists believe dark matter is made up of WIMPs: Weakly Interacting Massive Particles. Scientists are looking for them using detectors placed deep underground to shield them from cosmic rays and other particles. So far they have not had much success, which is a surprise given how ubiquitous dark matter is thought to be.

Or perhaps we have our sums wrong. There’s a possibility there might be a more a fundamental description of the universe beyond Einstein and general relativity.

“Some people think general relativity is sacrosanct. They think there’s a weird form of matter out there and we will be able to find out what it is - eventually. There are others who say we have to look at general relativity itself, and it’s the theory that’s wrong,” Bull said.

There is another unknown too: ‘quantum foam’.

It’s known that general relativity and quantum mechanics are not happy bedfellows. General relativity works on large objects like planets, stars and black holes but it doesn’t explain objects at the quantum level, where events are more unpredictable and described statistically rather than specifically.

Quantum mechanics allows for the possibility of virtual particles - pairs of sub-atomic entities popping in and out of existence. It’s this constant churn of particles appearing and disappearing that’s called quantum foam, and it has been suggested that this stuff is the fundamental fabric of the universe.

The problem with quantum foam as a theory is that it’s happening on a scale so small that even CERN’s atom smasher can’t it.

According to Bull, therefore, general relativity might be challenged but it still holds up for the universe at our scale. And that brings us back to neutrinos and time travel.

Ben Still works on the Tokai 2 Kamioka Experiment in Japan that has found that certain neutrinos change from one flavour to another as they travel. T2K found that muon neutrinos actually become electron neutrinos, for instance. Like OPERA, T2K has also been firing neutrinos over long distances.

While OPERA found to its cost that neutrinos can’t travel faster than light, and so cannot travel in time, the results from T2K shows there are still too many unknowns about neutrinos to draw a final conclusion.

So Still doesn’t think faster-than-light neutrinos have been completely ruled out, which provides a potential way in for would-be time travellers.

“We can only say what nature doesn’t do and I don’t think we are that a point where we can say what a neutrino does unequivocally.”

When it comes to time travel, physics isn’t a precise science. Neutrinos might be able to travel in time, but the operative word here is ‘might’. It’s a theory based on the fact we still know so little about these sub-atomic riddles.

On the grand scale of general relativity, time travel is a least possible - again, theoretically speaking. It’s just that the practical side of the story that gets in the way.

“The time travel thing, I’m not sure that's plausible,” Bull concludes. “But fitting more space into a smaller space like the Tardis. That’s something you can get out of general relativity.”