Oculus: 'Terrifying' virtual reality gaming 'will change the world', WE SWEAR IT

APU13 Virtual reality – the technology behind strapping on a headset and finding yourself in another world – has been "the next big thing" for decades. Now a Southern California startup, Oculus VR, says that the wait is over. Well, almost. 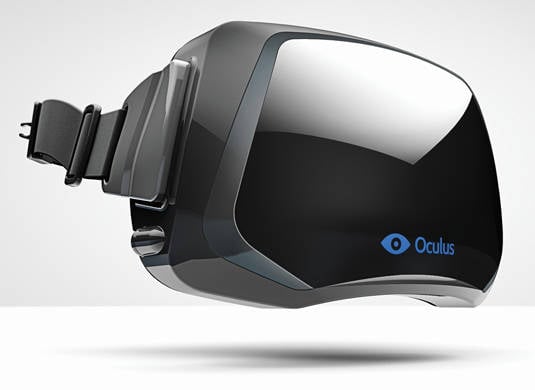 You can't buy the Oculus Rift yet, but when you can it will 'change the world', man

"Virtual reality is finally here," Oculus VR cofounder and CEO Brendan Iribe told his audience at the AMD developers conference, APU13, in San José, California, on Wednesday. "We've all imagined it for so long. It literally is arriving now, and it literally is going to change the world."

Note that Iribe said "is arriving," and not "has arrived." His company may have shipped more than 35,000 of its Oculus Rift development systems to programmers in the past two years, but a consumer version won't be released until 2014 – and exactly when in 2014, he wouldn't say.

Iribe dissed other attempts at VR headsets, referring to Sony's HMZ-T2 as a "TV stuck to your face" (although recent Sony patent filings point to a VR system for its PlayStation 4), and characterized Google Glass as "not even augmented reality – it's projected reality. It's this thing up in the corner of your eye. It's not going to give you Call of Duty or Battlefield or some incredible experience."

Fair enough. The Oculus Rift, in the other hand, is a true motion-sensing headset that tracks your head movements and projects stereo images that move to match your changing gaze.

Iribe was also careful not to praise Oculus VR's current developers' version too highly. "Sometimes internally we kind of joke that the developer kit that we've been shipping is kind of like Doom – it's kind of halfway there."

As gamers who were around when it was released in 1993 will remember, gamer god and now Oculus CTO John Carmack's Doom could best be described not as a 3D game, but a "2.5D" game. Doom may have been, well, "kind of halfway there," but it was a major step in the march from Space Invaders to Grand Theft Auto V.

Iribe believes – and is betting his company on his belief – that VR is the next transformational step in gaming. "Something's gotta break on this," he said. "We've got to get a new experience."

And that new experience, he said, is a motion-controlled display that renders everything correctly with an absolute minimum of latency, motion blur, and distortion. And he believes that Oculus VR is thiiis close to providing that experience.

'The whole scene kind of smears'

But not quite yet – the current development kit still has a persistence problem when you move your head and the view changes. "The whole scene kind of smears," as the pixels switch from color to color during the transition, Iribe admitted. "VR is smearing around until you stop, and then it looks good; and then you smear over here, and then it looks good – you get this incredible motion blur," he said.

The development system requires 40 or 50 milliseconds for what Iribe referred to as the "motion to photon" workflow: info from the headset's sensors is passed over USB to the game engine, which then writes data to the display, which causes the pixels to switch to the appropriate color. Oculus' goal is to get that latency down to under 15ms, which should help alleviate the smearing problem.

Another trick that they're investigating is to use the human eye's persistence of vision capability to lessen smearing. This method would flash an image for a mere milliscond or two, then shut down to black while the next image is readied, then fire that one up, and so on.

A third fix would be moving from LCD displays to faster organic light-emitting diode (OLED) displays. An LCD display can take as long as 12 to 16ms to switch pixels, while an OLED can accomplish the same task in less than 1ms. Other tricks involve the game engine itself and the process of writing to the display.

A "motion to photon" workflow of 20ms is considered by some to be good enough, but the true "Holy Grail" would be 7 to 15ms. "And this is awfully hard to do, Iribe said. However, Oculus does have internal prototypes that can achieve 15ms performance.

"And the experience is magical. It literally changes everything," he said, promising that future Oculus VR products will have neither pixel smearing nor motion blur.

"We're not yet there today," he said, "but it's coming very quickly."

How quickly? Iribe wouldn't say. But he did caution that it'll be worth the wait. "We really want to get this right. If we don't get it right, many of you will be sick," he said.

When the system does finally solve all of its problems, "you're going to be able to look up at monsters and be totally terrified by these incredible monsters for the first time," he said.

"I haven't really been that terrified on a 2D screen before. You will be terrified in VR."

For hard-core gamers, terror is a plus, it appears. ®

Although the Oculus Rift currently provides the best experience to people with 20/20 vision, accommodating nearsighted and farsighted people, Iribe says, is a top priority. "We're working on it," he said. "I wear glasses, too."