There's never a virgin around when you need one

It looks like our most recently discovered mammalian cousin, the Saola, will be with us a while longer, after the World Wildlife Fund reported that one of the most endangered animals on the planet had been snapped by a camera trap in a remote Vietnamese conservation area. 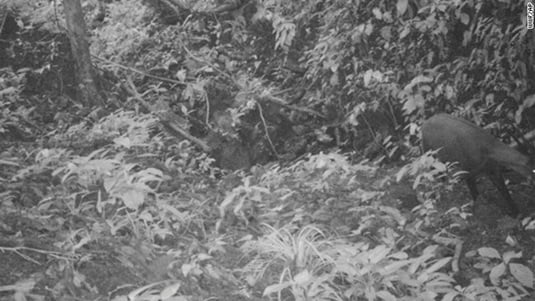 "When our team first looked at the photos we couldn't believe our eyes. Saola are the holy grail for South-east Asian conservationists so there was a lot of excitement," said Dr Van Ngoc Thinh, WWF-Vietnam's director. "This is a breath-taking discovery and renews hope for the recovery of the species."

The Saola was only discovered in 1992 after researchers from WWF found three unusual skulls of displayed on the walls of hunters' homes in the high-altitude, broadleaf forests of the Annamite (Truong Son) Mountains on the Laos/Vietnam border. The antelope-resembling creature has a pair of unusually long, straight and close horns and fewer than 250 are thought to exist. The word "unicorn" is used a lot when discussing the saola mainly due to its rarity, though some experts also suggest that it inspired the legend of the qilin, a creature occupying a similar niche the the unicorn in Chinese mythology.

A live Saola was first spotted by a camera trap in 1999 as part of a survey of the mountains, which also contains two other unique deer species – the large-antlered muntjac and the Truong Son muntjac - and its own species of striped rabbit. The reclusive creature was shown to be around four feet tall, weighing around 200lb, with a dark brown hide, and was the first large mammal to be discovered in over 50 years of searching.

Then in 2010 villagers in the area villagers in the area captured a live Saola in the Laotian Xaychamphon District of Bolikhamxay province and videoed it. Sadly, before scientists could get to the remote location the animal died, but the autopsy showed it wasn't an antelope, rather a closer cousin to the cow, and had unique features.

Here's archive video of a Saola "unicorn" antelope, the footage of which is much more clear than the photo above:

The Saola has the largest scent glands of any recorded mammal, and has a highly developed nose to match. When confronted with danger they reportedly spray scent, but are apparently relatively tame around humans.

Shortly afterward the capture, the Vietnamese government set up a 60-square-mile conservation zone in the Quang Nam province, along the Laotian border, to preserve and protect the Saola and find out more about the animal.

Being a friendly, fleshy animal living in a protein-poor environment inhabited by humans isn't much of a survival strategy, and since the establishment of the refuge the government has removed 30,000 game snares from the area and destroyed 600 illegal hunting camps.

The rare beast also had the misfortune to evolve in what was, comparatively recently, a bitterly fought-over piece of territory on the planet. During the Vietnam war the area was part of the Ho Chi Minh trail, used by the North Vietnamese to send military supplies and soldiers to the southern part of the country, and was heavily bombed as a result.

The Vietnamese government hired locals to run the reserve and investigate how the unicorn species lives. So far the Saola appears to feed in the early morning or late evening and travels alone or in very small groups, and the specimen recorded in September was walking alone.

"These are the most important wild animal photographs taken in Asia, and perhaps the world, in at least the past decade," said William Robichaud, Coordinator of the Saola working group of the IUC Species Survival Commission.

"They are also inspiring evidence of the effectiveness of the forest guards model to keep saola from sliding into the abyss of extinction. But more support is needed, so that WWF and other partners can scale up the initiative to additional parts of the Saola's range in Vietnam and Laos." ®