Review The biggest development in Fedora 20 (aka Heisenbug), which recently hit beta, isn’t something unique to Fedora at all. It’s the GNOME 3.10 desktop.

Fedora's live desktop CD has long served up GNOME by default, but Ubuntu is moving to Unity, OpenSUSE has focused more on KDE and Mint is forging its own path with Cinnamon 2.0. All of which means Fedora is not just a showcase for GNOME 3.0, but one of the last major distros pushing GNOME from the default live CD.

Much by way of change in this beta of Fedora 20 – which hits general availability on 13 December – is primarily incremental improvement.

But GNOME 3.10 brings quite a few new features and apps, a significant visual refresh and one controversial change to the desktop.

Upon installing Fedora 20, the first thing you're likely to notice about GNOME is the new look for the windows in this release. GNOME 3.10 features what the GNOME developers call the "Header Bar", which collapses a window's title bar and toolbar into a single element, saving a bit of vertical screen real estate and giving GNOME windows a slightly less cluttered look.

The other, more controversial change in GNOME 3.10 is the disappearance of the minimise button. The only button you'll see in the top right corner of a GNOME 3.10 window is the close button. The GNOME developers think the typical trio of buttons is just too confusing. At this point there seems little point in arguing, the button is gone, GNOME 3 marches on. If you want to minimise windows, might I suggest Unity, KDE, Cinnamon, XFCE or pretty much every other desktop OS known to man.

These visual refreshes and disappearing features are felt throughout GNOME 3.10, but nowhere are they as noticeable as in the default file browser, Nautilus. The new and improved Nautilus looks much nicer and is less cluttered, which makes it feel more GNOME 3.0-like.

Perhaps the best visual tweak in GNOME 3.10 is the new system menu that, like so much of the GNOME interface, is designed to be clean and simple, staying out of your way until you need it.

Unlike so much of the rest of GNOME 3.x, though, the new system menu actually succeeds in being simple and powerful. Most of the old GNOME Shell indicators and applets you'd likely want – things like Wi-Fi, Bluetooth, Volume, Battery, Brightness and such – have been condensed into a single drop-down menu that's hidden away until you click the system menu icon in the upper right corner.

The indicators aren't gone though, which means you can still get an overview at a glance. For example, you can still see that you're connected to Wi-Fi and have three bars worth of signal or that the volume is at 50 per cent. And to interact with those indicators no longer requires clicking precisely on the little icon for each one, instead you just click on the whole area and an overlay gives access to each.

GNOME 3.10 also sees the introduction of a number of new included apps. All the new apps – like Music, Maps, Photos or Weather – are just "preview" status (presumably something like beta) and none were included by default in the Fedora nightlies I tested. However, all of them are available through yum. 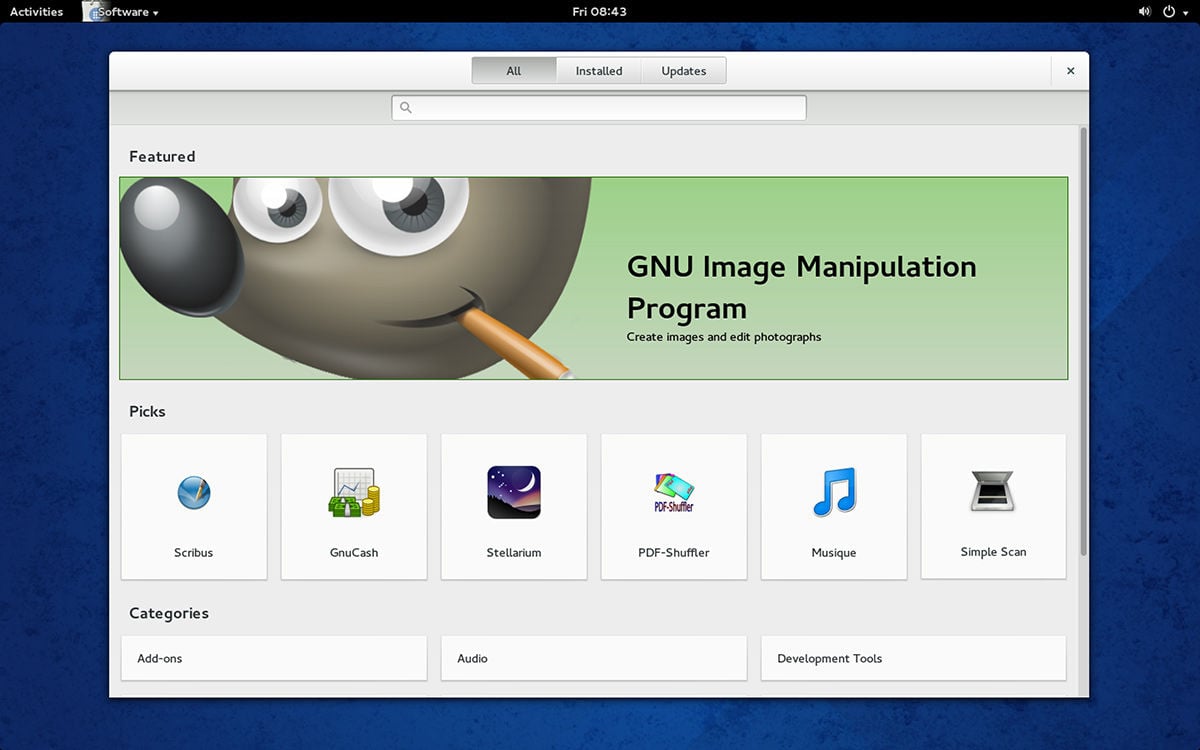 I tested Music, Maps and Photos and found all three to be buggy, unstable and best avoided. Maps loaded OpenStreetMap data just fine, but never correctly found anything I searched for, which makes it basically useless. Music failed to recognise any of the files in my music folder and the Photos app managed to work, but crashed frequently. Install and test these apps and you'll discover why GNOME considers them just previews and why Fedora seems to be skipping them for now.

The Fedora 20 beta does ship with GNOME 3.10's new distro-agnostic Software application for installing and updating installed software. Unlike the rest of the new GNOME apps, Software actually worked as advertised and I had no trouble searching for, installing and uninstalling apps.

That said, GNOME's Software app is still a work in progress – extra features like app ratings and screenshots are reportedly in the works. It's not hard to see the inspiration for Software – it looks and behaves pretty much like Ubuntu's Software Center.

The Fedora project wiki is in a transition stage at the moment, migrating to a new feature-tracking process, which at the time of writing does not offer much in the way of progress reports.

That makes it hard to peer into the development process and try to guess what might actually make the final release of Fedora 20. There's nothing major on the list of proposed changes anyway, but it looks like Fedora fans will at least get the usual slew of developer tool updates including Ruby on Rails 4.0 and Perl 5.18.

One nice upside to the lack of major new features – the Fedora 20 beta has been very stable in my testing. So long as you stay away from the various GNOME preview apps, you should have no trouble testing Fedora 20. ®