LG’s G2: The phondleslab that wants you to TOUCH ITS BEHIND

The Android handset you’ll want to see the back of?

Review For all the variation in screen size and the occasional BlackBerry with a keyboard, the design of modern smartphones is remarkably similar: an oblong lump with some sort of button arrangement below the screen and the power and volume controls scattered around the edge. 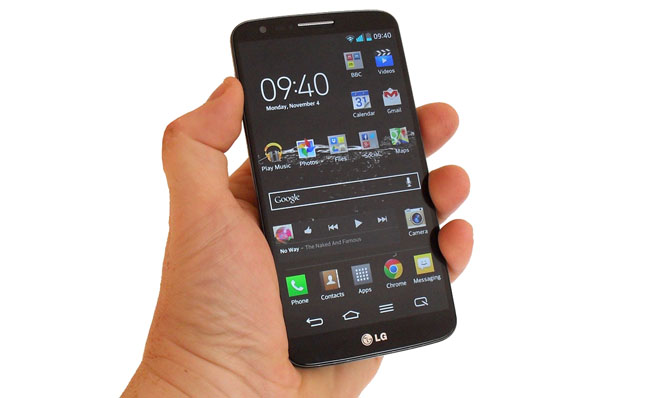 LG’s G2: not large in the hand

But no longer. With its new G2 flagship, LG has decided the best place for the volume and power toggles is on the back.

What surprised me isn’t that LG has done this – after all cooking up some sort of differentiation between one Android phone and another is becoming increasingly tough for OEMs – but that it turns out to be a bloody good idea.

Let’s start by having a fiddle with that odd-looking control on the back below the camera lens. The shiny chrome nub – it has a white LED surround too – in the middle is the power switch, the pressure plates above and below are the volume controls. 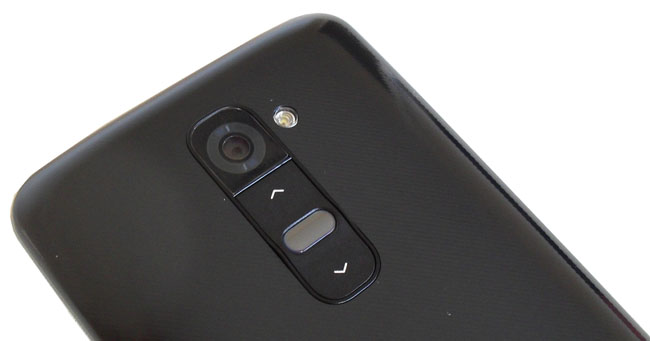 The button on the back is actually a darn good thing

All three have a small amount of physical give so you can tell when you’ve pressed them and they are all very easy to reach with the index finger of the hand you are holding your G2 in while at the same time maintaining a firm grip.

Using the rear controls becomes second nature very, very quickly - I’m talking about 20-odd minutes of use. After which time you wonder why the heck nobody has thought of doing this before.

With buttons on the back, there’s nothing on the sides

The impressive usability of the G2 also has a lot to do with the basic design. The 5.2-inch, 1920 x 1080 – for a dots-per-inch density of 424dpi – IPS LCD display is not only bright, colourful and very good in sunlight but makes for a handset that while boasting a VLP™ screen size is still eminently useable with one hand.

Compared to the Samsung Galaxy S4, the G2 is actually 2mm taller, 2mm broader and 1mm thicker. It’s also 13g heavier. But those extras are close to irrelevant. The bezel surrounding the G2’s screen is about as thin as it’s possible to be without getting in the way of cost-effective fabrication and enhances the impression of the front of the G2 being all-screen.

While the front of the G2 is a sheet of Corning Gorilla Glass, the back is a plastic affair with a faux carbon-fibre weave pattern. It lets the side down a bit, aesthetically speaking. Of more fundamental importance is the fact that the rear cover is fixed in place thus kyboshing any plans you may have to replace the 3,000mAh SiO+ battery. 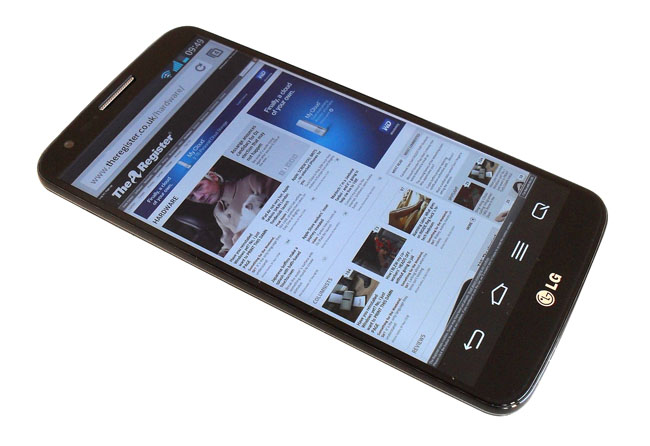 It’s a smooth and curvy design all round

I’ve not forgotten to mention the Micro SD card slot, it’s just that there isn’t one so you have to make do with the 16GB of built-in storage, which amounts to just under 11GB free after the system has put its towel on the sunloungers. Apparently there is a 32GB version too. No storage expansion and a fixed battery will be a dealbreaker for many and no doubt has brought a smile to the faces of the sales executives at Samsung.