Sadly, there are few volcanic islands in Austin

The concept behind Spiceworks profiles is industry-changingly great, but the messaging surrounding "Spiceworks as your means of showcasing your work" needs some real work if it's going to appeal to a bunch of introverts who often count among those achievements "having written a whitepaper". Suffice it to say there's a requirement for the evolution of acceptance of more traditional mediums of self-expression in Syed's brave new spicy world.

PR manager Adam Schaeffer fills in Spiceworks' view: "New profiles + projects [are] a very natural extension of the traditional resume. Our profiles, as you know them, still exist so IT professionals can absolutely highlight traditional components you'd find in a resume (who you work for, certifications, etc). Projects just add a new dimension to the profiles. We certainly didn't intend to dismiss the written word in how we discuss profiles/projects. In fact, the written description is an important component in both the IT pro profile and the projects they create."

This devotion to the written word allows for 500 words in which to describe your life's major achievements. Although my editor will cheer anything that forces me to keep information density high and word count low, I think this is nowhere near enough room to describe most of the projects I've worked on.

The other issue is the notion of "followers". In the Spiceworks of old "followers" were functionally irrelevant. They didn't really serve a phallic measurement purpose within the Spiceworks community and the community interface itself made the "feed" you got from following others noisy to the point of uselessness.

Following people still has no tangible benefit within the existing community UI. However, the phallic measurement requirement of high follower count starts to gain new dimensions when we propose showing off our shiny new profile to outsiders.

My Spiceworks profile: I'm kind of (not) a big deal (at all) (click to enlarge)

To put things in context the most influential individual within the Spiceworks community – Scott Allan Miller or SAM – has only 3778 followers at the time of writing. The next most influential – John White – has a mere 470. Phillip Lessley, a prolific poster and easily within the top 5% of the community, has 238 followers.

The community is there: 4.5 million Spiceworks users, a significant percentage of which actively use the forums. There is a potential addressable market of 13 million IT pros and an untold number of VARs, MSPs, CSPs and vendors looking to create pages.

For all that there is this massive audience, driving interconnection and facilitating discoverability will require massive user experience overhauls on the existing community website. And don't get me started on the mobile app.

All of this is fixable. Spiceworks has done something unique; it has captured an industry vertical in a social network and begun, piece-by-piece, to exploit it. Spiceworks estimates – based on some intensive polling and surveying – that its userbase is responsible for over $500 billion in annual IT spending. This leads to a lot of advertising money being spent by vendors chasing that pot of gold resulting in substantial revenue for Spiceworks and a chance to actually IPO in the green.

To be clear: Spiceworks is a threat to every existing social network, tech marketing agency, content creation firm and PR apparatus on the planet. If left alone for only a few more years they will own the relationships between most IT pros and their vendors as well as between many of those vendors themselves.

I could rotate through a list of vendors, but suffice it to say that I think Dell needs to seriously look at an acquisition. Dell has ambitions of ditching the fairly low margin "shifter of tat" business and move on to become a services company. With the exception of some of the higher-end enterprise gear, it just doesn't make sense for Dell to keep making its own stuff.

If it doesn't make its own stuff it will need strong alliances with other vendors - a difficult proposition given the long history of competition between Dell and current box makers. It will also need an ecosystem of partnerships to provide services to it's customers, both are the type of B2B corporate networking that Spiceworks specialises in.

Spiceworks is an ideas factory; what Silicon Valley is to the development of new software, the Spiceworks community is becoming to the provisioning of IT services. A Dell/Spiceworks hybrid might not get along so well with the other major verticals - HP, Cisco, IBM, Oracle - but that's a fairly minor price to pay for what Dell would gain.

Spiceworks is in the same metro as Dell. Everyone knows everyone else and Dell is looking to become a vertically integrated company that dominates the IT sector. They can't do that without something that makes them unique. Spiceworks could be that something.

Unlike most social networks, Spiceworks has the very real possibility of an IPO with a business model that works and being profitable out of the gate.

If the tech giants let Spiceworks IPO, they'll regret it. They clearly missed the boat with Facebook, and it cost them a significant opportunity, however, whereas Facebook is a million kilometers wide, it is only a few centimeters deep. Google built an empire on advertising money. Microsoft threw one away trying to replicate that success. Everyone seems to want a piece of this particular cash cow.

Once Spiceworks becomes established within a given profession, its focus on depth in its social networking and deep vertical integration will make them far harder to dislodge or effectively compete against. The IT industry is just the beta test and Spiceworks doesn't have to be all things to all people to suck the majority of money out of the advertising market. It just has to target the high-value "professional" markets, one at a time.

Strike! Now, while the iron is hot

Now is the moment of Spiceworks’ vulnerability. The firm has revealed application and social network plays to the world but have yet to fully realise the execution of either. The next 18 months will out. If Spiceworks is left alone and they succeed in their various goals then I'll be telling the next generation "I knew them back when" stories.

Alternately Spiceworks could get acquired, or it could drop the ball in spectacular fashion, miss the window of opportunity and fade into nothingness. Of course, how this plays out will seem nebulous at best if the most you know of Spiceworks is reading about the company here on The Register a few times, or perhaps you have simplydownloaded the application and tried it out.

But the folks in charge of Spiceworks are aware that they stand on a precipice, and they understand the delicate balance between cooperation and competition with partners, customers and the product they sell: you and your precious eyeballs. 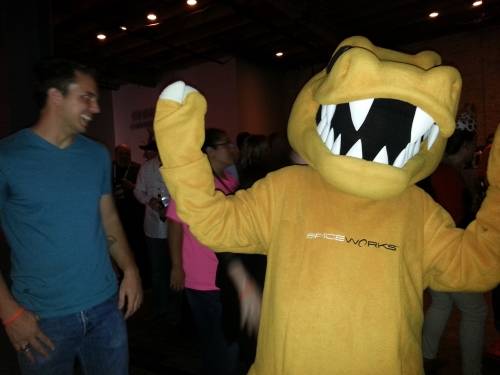 Spiceworks' CEO Scott Abel is a serial entrepreneur, but this is more than "just another company" to him; it's something of a legacy. Every man has his price, but his will be high.

These are not people who seem likely to fumble. They are dedicated, but experienced; they know the risks of working too close to the red line. They are aware of the importance of maintaining a productive, innovative and inviting corporate culture and they put serious amounts of effort into ensuring that they don't lose what has gotten them so far.

The next 18 months – two years at the most – will tell the tale. With 43 per cent of their user base now consisting of organisations above 500 seats, expect them to become as common a name in the IT industry as Facebook or Twitter are to the world at large. Despite the hurdles to be overcome, I am convinced that Spiceworks is here to stay. ®

We should be able to outlaw unauthorized inquiry, Voatz argues