Pull out your swords, nerds, it's ... a marketing wrestling match

EMC has issued its sales troops with a set of anti-Pure Storage battle cards – and Pure has responded with a blog heaping praise on EMC.

EMC's card of spoilers says: “Pure remains a constant threat as they are well capitalised and target our use cases in high performance databases, virtual servers and VDI.” 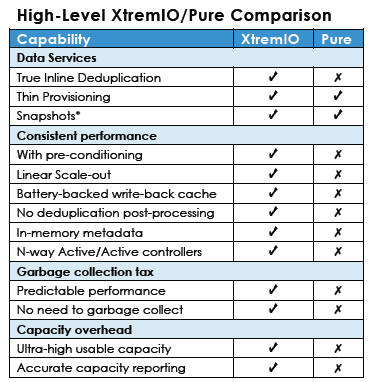 The battle card further suggests EMC bods get customers to “ask Pure about the limited speedup of administrative commands, such as VM cloning, with VAAI since they have not implemented XCopy. XtremIO integrates VAAI XCopy with inline deduplication and provides unprecedented speedup of routine administrative tasks.”

Pure’s blog, by CEO Scott Dietzen, has 10 rebuttal points after heaping praise on EMC for competing with them. Here’s what he says about EMC’s scale-out claim:

Pure’s architecture was designed to support independent upgrades for both performance and capacity, as it is unusual for increases in each to be needed simultaneously. Pure supports adding a shelf to increase capacity at the lowest cost possible, and supports annual non-disruptive controller upgrades to increase performance (with Moore’s Law). We’ve also designed scale-out into our architecture for tomorrow’s million+ IOPS workloads. XtremIO, on the other hand, offers only scale-out, requiring an expensive controller addition for every capacity expansion, leading to higher cost, lower density, and overspending for unused IOPS.

Its pitch about XtremIO competition is effectively: “Bring it on and run head-to-head comparisons.” ®