MANUAL STIMULATION: Whack me with some proper documentation

Why doesn’t software come with a book any more?

Something for the Weekend, Sir? Another day, another app, another incomprehensible user interface. If this was a proper piece of software running on a proper computer rather than a £500 phone, phablet or some similar pharcical phucking phanboi phondleslab, it might be possible to call up a Help menu or leaf through a manual.

Instead, I’m left staring at a bizarre arrangement of on-screen buttons labelled with arcane symbols that give no indication whatsoever of their function. Not only is it impossible to determine how to use this product, it isn’t altogether clear what the product is supposed to do.

Perhaps it’s a sign of age. For example, I have reached a stage in my life at which I can no longer concoct new passwords. I am passworded out. When a pleasant fellow at a call centre asks me to think up a password, I confess to him that this is not going to be possible. When I am asked to give letters three and six of my existing password, I tell him I can’t remember either of them.

Hmm, this doesn’t bode well for an IT journalist. Really, I ought to find another job in a less stressful industry. I was thinking perhaps I could relocate to the Middle East and take up a less volatile trade, such as become a purveyor of flammable and childishly drawn reproductions of US flags and American presidential effigies.

Something, however, tells me that I might not be alone with my personal issues. Also, the problems are easily fixed. For example, a little bit of encrypted, multi-platform, cloud-based KeePass action is starting to work well for me now that I’ve finally managed to memorise the master key.

As an IT trainer, too, I admit to having a certain insight into how most people learn to use software interfaces. From the learner’s point of view, it helps if you have an idea of what you are going to achieve in the next few minutes and how this fits into the bigger picture, and then you are led through the process which – and this is important – you carry out yourself. Then you repeat it on your own.

Back in t’old days, software came with manuals. No, no, I’m not talking about the hardbacked, ring-bound tomes that came with the likes of dBase III, which was a rare luxury that no software company or its customers could reasonably afford these days. Nor am I so stuffy that I insist on paperback doorstops included in the box. Nor indeed do I expect my software to come in a box at all. 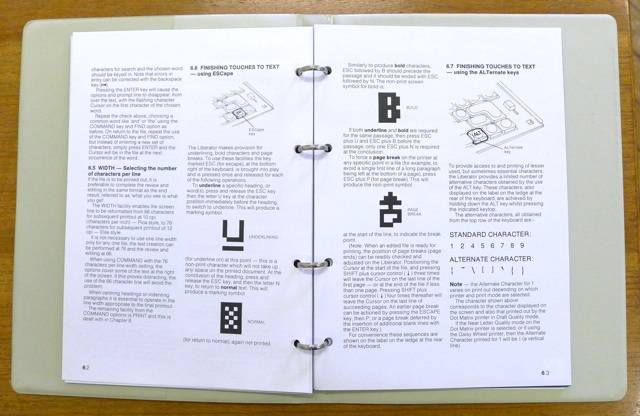 Ah, those were the days

Rather – and call me foolishy demanding if you will – I just want something that tells me how to use the software. But these days, if I hit F1, the chances are that nothing will happen at all.

My pet hate is calling up the ‘Time Waste Option’ command that some idiot developer chose to label ‘Help’ but which launches a web browser and directs it to an ‘Irrelevant Off-Topic Periphery’ page that some idiot webmaster has titled ‘Frequently Asked Questions’.

Apparently, “How do I use this software?” is not a question that is frequently asked.

I use a cloud-based business accounting program – no need for me to say which one, they’re all owned by the same company now – that is infuriating in this respect. Its partially out-of-date ‘knowledgebase’ is full of notionally vague articles that describe in general terms what functions exist in the software but without explaining how to use them.

So every time you want to do anything, you have to email the support team to ask how to do it and wait for them to reply with the necessary instructions. When I observed to them that this seemed like a waste of resources compared to just writing a proper online software manual that users can read, they stressed that the knowledgebase contained everything. But it doesn’t, I replied: that’s why I’m emailing you.

On one occasion, I insisted that they sent me step-by-step instructions – you know, like you used to get with, oh I dunno, software manuals – and these turned up in an email that fizzled out at the end with a suggestion that I ask my accountant for his suggestions.

So I called my accountant. His suggestion was that I ditch this half-arsed software, buy a copy of Sage and sign myself onto a training course or buy a For Dummies... book. 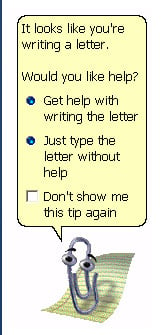 The small developers are not alone in failing customers in this way. I’m a heavyweight Adobe user – that is, I use Adobe software and I weigh quite a lot – and its Help system is just about the worst in existence. Calling up Help instigates a baffling process by which a program you’ve never seen before tells you that software manuals you didn’t know were on your computer are out of date for products you didn’t know you had, then laboriously tries to update them all for the next 72 hours while you sit around trying to remember what it was you were doing before all hell broke loose on-screen.

If you are reckless enough to search for help on the Adobe website, you end up trawling through a dustbin of seemingly random results referring to old versions of the program and, worse, the wrong program. Take a tip from long-suffering Adobe customers: forget about the Help system and instead go straight to the user forums and ask other customers. They’ll be happy to tell you how to use Adobe’s software, even if Adobe won’t.

My other pet hate is the shit-munching video tutorial. I fail to see how spending a quarter of an hour watching a blurry rectangle of illegibility while an American spits and wheezes into a microphone that’s so muffled it might as well have been be shoved up his arse is superior to reading a step-by-step workthrough that I could complete myself in less than five minutes.

And by doing it myself in real time rather than watch someone else do it first, I will have completed both the task and the tutorial simultaneously and learnt the process more thoroughly as a result.

All my software manuals sit happily on my tablet, allowing me to work on my computer with the manual on my desk or in my lap – like a book, I suppose.

But so many phone and tablet apps have no proper instructions at all. This is, as Shakespeare said of Richard III, a right old bugger. The self-obsessed developers who churn out this junk are clearly of the opinion that their software is so intuitive that manuals are unnecessary.

No it isn’t and yes they are.

Their websites show glossy promo vids of geeky bearded models using their apps to cure diseases, solve centuries of climate change and put an end to conflict between nations with little more than a swipe, pinch and zoom. Two minutes later, I’ve download the app for myself and I’m left staring at a black screen surrounded by designer hieroglyphs. I swipe, I pinch and, oh heavens to Betsy, I even zoom – to no avail.

None of the hieroglyphs looks like a Help label so I check the developer’s website. No instructions. No manual. Now that I’m thinking about it, there isn’t even anything that tells me what the app actually does in any practical sense, just that it’s supposed to revolutionise something that wasn’t possible before I downloaded it. As Shakespeare noted – after penning The Tempest, I believe – what the flying fuck am I supposed to do next?*

*It is said that The Bard hired a freelance writer to dash off Henry VIII and The Two Noble Kinsmen while he himself relocated to Spain, spending his twilight years selling flammable Union Jacks and raffia effigies of James I...

Alistair Dabbs is a freelance technology tart, juggling IT journalism, editorial training and digital publishing. He appreciates that selling the idea to software publishers of getting proper manuals written is just a cynical ploy to drum up more work for himself.