Sonos and I: How home media playback just gets SO FRUSTRATING

Going through the installation of a couple of Sonos Play:1 speakers in a cottage lacking any form of Hi-Fi or video storage/playing devices got me thinking about just much existing Hi-Fi, TV and DVD systems suck - big time.

My house has multiple variously incompatible devices stuck in time warps of point functionality. The manufacturers were obviously allied to various cable suppliers at different times, judging by the spaghetti junction of wiring nightmares behind the TV and Hi-Fi. This cottage has none of that – and, by whatever deity you swear oaths by, it never will have.

Let's leave that for a moment and take a gander at the Play:1s. These are square tower enclosures, about six inches high and five inches wide and deep. They feel stiff and heavy, and are covered in mesh and can be coloured black or white. These Play:1s are the new entry-level Sonos speaker product and are priced at £169, including VAT, compared to the bigger, and better Play:3 at £259.

Of course you have to have two for a stereo pair, which doubles the cost to £338. The sound quality is simply amazing, with crystal-clear trebles, sumptuously smooth mid-range tones and solid base. The cottage has stone walls so you can bump up the volume to deafening levels and, in its small room, there's no distortion; just a tidal wave of oh-so-smooth sounds. So, apart from that, why am I so smitten with a pair of speakers that cost the best part of £350? 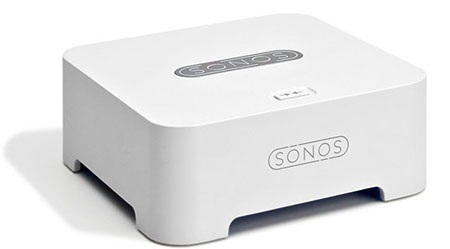 ] They have built-in amplifiers and receive the sounds they are going to play by a proprietary Sonos Wi-Fi network. This is driven by a box called a Bridge which cables/links to a Wi-Fi router.

The Bridge is about 4.5 inches square and 1.5 inches high and has curved edges. You send the sounds you want to play via the Bridge from a Wi-Fi-connected computer (Windows or Mac), notebook, tablet, smart phone (iOS or Android) or podlet. The bridge Wi-Fi's the sound to the speakers, meaning no data cables. Get it? This system is the dog's bollocks for playing albums, songs, playlists, or whatever else you have stored on your smart devices. 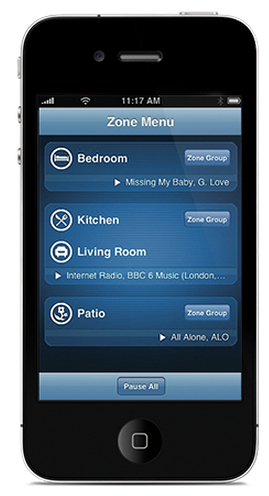 And, and, and - I'm impatient to get the good news out - it uses a smart phone or computer as the remote control unit. Select music from your smart phone or other computer's library and play it. You can play Internet radio stations too, from Sonos' list, or stream music via Spotify, Pandora, etc. There can be speakers or speaker pairs in different rooms in your house, each playing the same or different music. 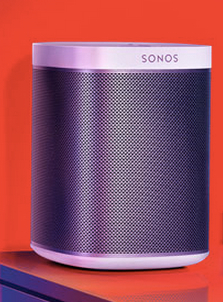 So, okay, what sucks about this? Simply, it points out the major suckiness of existing TV, home cinema and Hi-Fi setups which have been developed to do specific things and forgotten - or not realised - what we want to do, which is simple.

We want to play music and hear other recorded or broadcast sounds on a single wire-free Hi-Fi system in a room and we want to watch video on a TV (or computer screen) with the sound split off and played through the Hi-Fi system because TV speakers suck. Home cinema systems require major skirting board surgery to hide the multitude of cables involved in surround sound.

My house has speaker sprawl; five cinema system ones, the TV ones, the kitchen radio one, the iMac and two notebook computer ones, the smartphone ones with their plug-in head phones... And don't get me started on remote controls. Listen, product designers: I have a remote control. It's called my smart phone. Just provide an app, why don't you, and give your damned device a Wi-Fi interface. Jeez, what's the problem here, wilful blindness?

Well, yes, actually it is. It seems to me that no supplier is actually thinking from a system breadth and ease-of-use point of view. Consider these points:

There are several Sonos products which hook up to a TV. The Playbar is a single long box, costing £599, with multiple amps and speakers that takes a TV's sound and pumps it out into the room better than the TV can. Add in a pair of Play:1 or Play:3 speakers together with a Sub, a gorgeously performing woofer (£599) and you have a 5-speaker surround sound system costing more than £1,500. Sorry guys, too rich for me. I just want the damned TV sound to be played through the Play:1 speakers without having to spend £1,200 to do it.

There are the Connect and Connect:Amp products. The Connect product tales line-in output from the TV or home cinema box and shoves it out through Sonos speakers. This costs £279. The Connect:Amp hooks up to wired speakers and sends Sonos-delivered sound out through them for the sum of £399.

All I want is a home media playing system that sends video to a TV or similar screen and its associated sound to Wi-Fi speakers. This video could be a digital video file, like films in my iTunes library. DVDs are disappearing from my house, heading towards the same level of availability as vinyl LPs, VHS and Walkman tape cassettes and rocking horse manure. If the damned sound has to be split off from the video inside the TV and then routed back to the Sonos speakers then that's a second best.

I want a smartphone app as my control unit, videos Wi-Fi'd to the TV, and sound Wi-Fi'd to the speakers. And while waiting for that I want a line-in capability from the TV that costs a darn sight less than the Connect's £279. I mean, really, what's the actual cost of the goods? A tenner?

If my iWhatever devices can squirt sound by Wi-Fi to the Sonos bridge then why can't their included DVD player (for iTunes videos) split off the sound component and send that to the Sonos system too? Well, Apple won't want to do that, so it will have to be done in a box attached to the TV. Okay then, just don't rip me off price-wise for the line-in cable and box.

And the Sonos Play:1 speakers? Magic. I'm off – Van Morrison is singing Rave On John Donne and the volume is gonna get dialled right up. ®