Where IS that 'ceepie-geepie' takeover?

SC13 The Top500 ranking of the world's fastest supercomputers has been released, and the list of the top five systems could very well be simply a Xerox copy of the previous list, which came out back in summer.

And that's exactly how they ranked in the latest Top500 list, released Monday morning at the SC13 supercomputing conference in Denver, Colorado. It appears that the much-vaunted revolution of adding screamingly fast, highly efficient coprocessors based on Nvidia's Tesla and Intel's Xeon Phi – with a few AMD Radeons thrown in for good measure – is taking its own sweet time to upend the HPC world.

Until you look at number six on the new Top500 list, that is.

There sits Piz Daint, a Cray XC30 system installed at the Swiss Scientific Computing Center that rocketed from number 42 in June to the sixth spot in the new list thanks to the addition of 73,808 Tesla K20X GPU cores that helped make it Europe's fastest supercomputer.

Piz Daint, the also-ran it was before the addition of Nvidia Tesla accelerator muscle

Two other of the top five six systems in the Top500 already have help from co-processors: Tianhe-2 with 2,736,000 Intel Xeon Phi cores and Titan with 261,632 cores in Tesla K20X cards. Number seven on the new list, the Texas Advanced Computing Center's Dell PowerEdge–based Stampede, formerly number six, also benefits from Xeon Phi cores – although a paltry 366,366 compared with the nearly three million in Tianhe-2.

All those Xeon Phi cores in Tianhe-2, coupled with 384,000 compute cores in 32,000 12-core Intel Xeon E5-2692 processors running at 2.2GHz, produced some equally stunning numbers when running the (controversial) Linpack benchmark used to compile the Top500 list: a staggering 33.86 petaflops. If you prefer your performance stats without the floppy HPC-speak, that's 33,860,000,000,000,000 floating-point calculations per second.

Exascale computing can be seen on the horizon – in China, at least (click to enlarge)

Total petaflops of the entire Top500 list put together have risen since the June rankings, from 223 petaflops then to 250 petaflops now. The increase is even more impressive when compared with the petafloppage recorded in the list of November 2012, when the total was a "mere" 162 petaflops.

Although total performance of all the Top500 systems taken together has increased since June, the number of systems using coprocessors didn't – that number remains at 53 – 38 using Nvidia, 13 using Xeon Phi, and two using AMD Radeon. We'll be curious to see if AMD's recently announced FirePro S10000 12GB Edition will entice any HPC houses to adopt their tech. 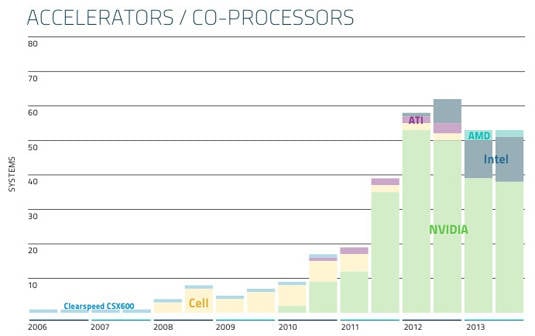 The pause before the accelerator explosion, or signs of stagnation?

The number of systems using co-processors was just about the only aggregate stat that didn't increase between June and Monday. In the previous list, there were 26 systems whose performance exceeded one petaflop; now there are 31. In June, to get on the list at all, your system had to achieve at least 96.6 teraflops; now the entry level is 117.8 teraflops. To get into the Top100 of the Top500 in June, the gateway was 290 teraflops; in the new list, it's 327 teraflops.

The company providing most of the chips that flip all those flops is increasingly Intel, which has a dominant share in processors and is increasing its coprocessor share as Nvidia's wide lead gets a bit less wide in each recent Top500 report. A total of 412 systems in the Top500 – 82.4 per cent – are now using Chizilla chippery. 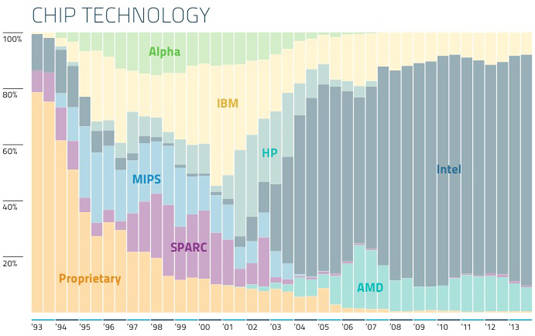 Finally, for those American Exceptionalists whose pride is hurt due to the commanding lead of China's Tianhe-2 – the top US system, Oak Ridge's Titan, cranked out 17.59 petaflops, barely over half of the Middle Kingdom super's 33.86. you can console yourself by knowing that the US has by far the largest number of systems to make the list: 265, up from 253 in June.

You Europeans, on the other hand, are slipping: down from 112 systems in June to 102 on the new list. But at least you have Piz Daint and its Tesla GPU accelerators to be proud of. Maybe you should equip more of your HPC systems with them – from what this new Top500 list tells us, not only will they jack up your floating-point scores, they're also not exactly flying off the shelves and into HPC installations.

Maybe you could get a bargain. Y'know, stagnant EU economy, and all. ®