GALACTIC YO-YO: Doctor Who’s trips to Earth... and beyond

Data Visualisation: How stories shift from our planet to others and back again

Doctor Who @ 50 We’ve seen how much of a tendency the Doctor has for visiting Earth relative to other planets in the universe, so what are the trends over his own timeline in his movements between Earth and elsewhere? When has the series felt most tied to our planet?

For this chart, each story was assigned a score of +1 if it predominantly took place on Earth and -1 if it took place somewhere else. As much as possible only a story’s primary setting was included, so this isn’t a strict list of consecutive Tardis landing sites. Returns to a previously seen setting within a story aren’t counted again.

A few stories have more than one score, however, if they switched between significant locations or took a tour of multiples places. Stories that took place in some ‘nowhere’ realm were scored 0.

These scores were then accumulated in sequence and plotted to produce a trend line in which movement to the left indicates a focus on Earth and movement to the right reflects a venture beyond our world. 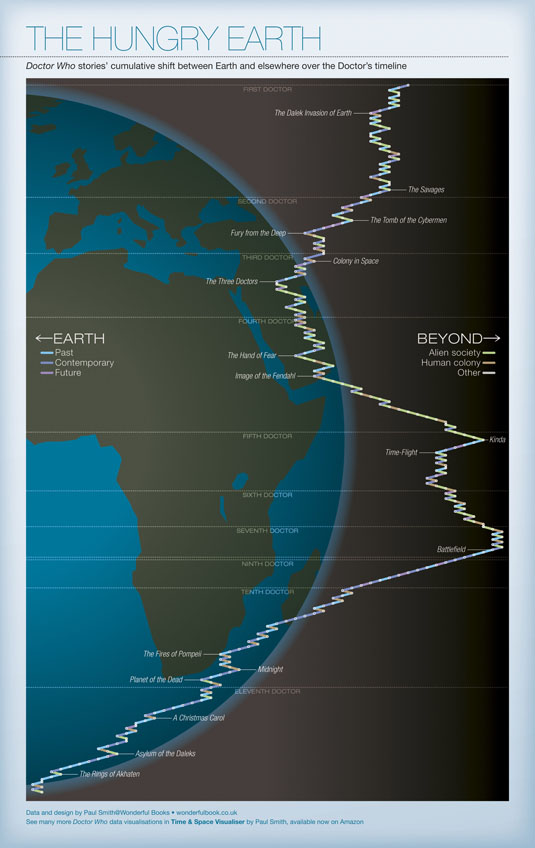 The line is coloured to indicate whether Earth-bound stories are set in the past, present or future, while off-world destinations are split between those set among an alien society on their world, and those focusing on future humans who have ventured beyond Earth.

The switches between alien futures and historical Earth of the early series creates a zig-zagging line around the vertical. A slight run of Earth-based stories around the end of Season 1 and start of Season 2 pulls the line to the left, but this is quickly rectified during the rest of Season 2.

Towards the end of the First Doctor’s time the series embarks on a significant drift Earthwards for the next two years, not venturing back out into the unknown frequently until Season 6.

The Third Doctor’s loss of Tardis travel is represented by a single extended ‘Contemporary Earth’ data point so as not to suggest continued returns to present-day – or near-future, if you prefer – Earth by choice, followed by his first off-world story, Colony in Space. For the incarnation who was supposedly stuck on Earth, the rest of his time actually sees tighter zig-zagging than the Second Doctor’s.

The arrival of the Fourth Doctor shifts the balance slightly to the right in his first two seasons, then in his third a swing back Earthwards is followed by a larger one away again. After Image of the Fendahl in the middle of Season 15, the series takes a determined move away from Earth, with only three stories set here over the next four years, all in contemporary times.

The second half of Season 19, the Fifth Doctor’s first, features a run of Earthly tales, which hold their own through Season 20 but then the trend edges back towards alien adventures until Season 24’s Paradise Towers.

With the Seventh Doctor now at the Tardis controls, the planet hopping slows and then, from Season 26, sharply reverses. Coupled with the revived series’ early devotion to Earth, the line jumps hard to the left, not really slowing until Series 4.

Another, smaller leap Earthwards during the Eleventh Doctor’s first year consolidates the trend, and although after that it slows a little, the overall drift is still towards Earth-based tales. ®