The splice is right

Splice editing required skill and, in the right hands, was an art in itself. At the time, cloning and chopping up tape was the closest anyone could get to the sampling tools we have on our phones, desktops and in studios today. 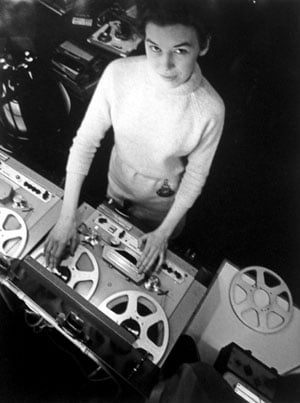 With three tapes running in sync, edit lengths had to be precise
to keep it all in time

Yet even Derbyshire and Mills were caught out here. They compiled the theme on three separate reels of tape simultaneously played in sync from three reel-to-reel tape machines. As this was all coming together they noticed a timing issue. Although the adhesive edit tape was visible on the tape backing revealing each splice, it would just fly by as the tape wound on and as a visual cue was effectively a blur.

Unable to trace the issue during playback, the two set about another method of detection and decided to roll out the three tapes alongside each other down the long corridors of the Maida Vale studios. They knew that it must be a flawed edit, where one section was fractionally longer than the other two tapes. Yet this laborious compare and contrast approach worked, as they checked the splices and the errant extended edit was located and cut to size.

Incidentally, if you peruse the equipment list you’ll notice a multi-track recorder was available, which begs the question, why bother with this three tape palaver? Derbyshire tells it like it is in her Radiophonic Ladies interview with Jo Hutton for the Sonic Arts Network in 2000, the year before her death.

“We had three remote-controlled, synchronised Phillips tape recorders. This changed the whole of our work because before that, not only did the machines not run at the same speed as each other, but the rulers that we had read differently. There was one wooden metre ruler and a plastic 12-inch ruler and so, if one was doing intricate work, nothing would sync at all.” Yes, those tape sections for the bassline – and other parts where timing was critical – were all made to measure.

Musical timing wasn’t the only factor that needed to be attended to: having these disparate elements play in tune was crucial in piecing together a listenable theme tune. Using an electric organ would be too recognisable and would bypass the experimental raison d’être of the facility and its musique concrète convictions. 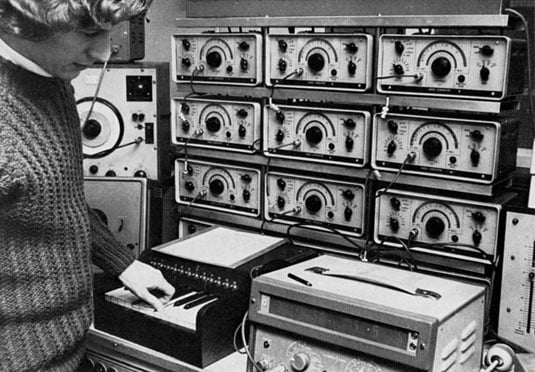 Brian Hodgson observes a frequency counter (right) as he fingers the compact decay-only keying unit connected to 12 Jason oscillators, three are obscured by equipment. Note the wobulator to the left

As synthesisers weren’t something you could buy off-the-shelf in those days, electronically generated sounds needed to be tuned manually. The Radiophonic Workshop did have a makeshift keyboard that used parts from a piano. It was described as a “keying unit” because it didn’t actually send out any pitch information.

The piano octave layout was for convenience, as it was merely a triggering device that could fire off individual tone generators, as Derbyshire explains: “There were 12 Jason valve oscillators, with eight electronic gating circuits, built in-house. The accurate oscillator was a Muirhead, which is used in research equipment. It was a switchable one used mainly for tuning, whereas the Jason was just swoopy – you know, Doctor Who swoopy.”

In synthesis, the gating refers to the switching on and off of the signal to vary its output duration. It’s something a musician would instinctively do by simply keying the note. Back then, things weren’t that simple, something Derbyshire was keenly aware of. 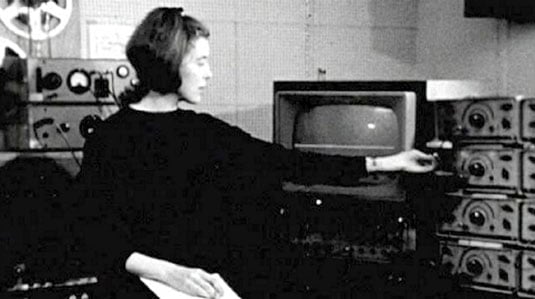 “Of course now on the computer, one can tune in any sort of scale by just pressing a button, but at the time I used to work it all out with my log tables, like the Pythagorean scale, the mean tone scale, adjust tuning and I remember doing a whole lot of comparative tables for Ron Grainer. I did the Doctor Who theme music mostly on the Jason valve oscillators.”

Arguably a more subtle effect than delay or echo is to apply reverberation to enable different instruments and treatments sounds like they occupy the same space together. Reverb comprises of countless, short echoes that can take a while to fade, giving rooms, halls and cathedrals their unique ambience. 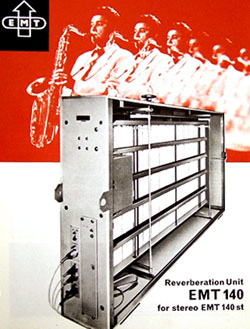 Acoustic chambers can be used – where sound is played from a speaker to be picked up from a microphone – and the reflections of the room are the effect that’s returned to the mixing desk. The BBC did have such facilities too.

However, a seemingly more compact option for the time was the EMT 140 plate reverb. It featured a 0.5mm thick metal plate (approximately 1m x 2m) suspended in a metal frame and housed in a wooden box about 8ft long and 4ft high and 1ft wide. It weighed over 400lbs.

Slap the side of a typical van and what do you hear? A bit of a boom, right? Do the same on a car roof and the effect is more shortlived. That’s how the plate reverb worked. With a transducer much like a loudspeaker mounted in the centre of the plate, audio was played into the metal. A microphone-style transducer (two for stereo) positioned outside the plate would pick up the sound vibrations and return the signal to the mixing desk.

This remote would sit on the mixing desk (or as a module inside it) and what was displayed as a reverb time meter reading would actually drive a motor to change the position of the damper when you pressed one of two buttons for more or less. In my own experience with the EMT plate reverb, it was the motor that was always failing, so you’d end up stuck with just one reverb time until it was serviced. Great sound though.

Next page: Dialling in a performance
Page:
Tips and corrections
23 Comments