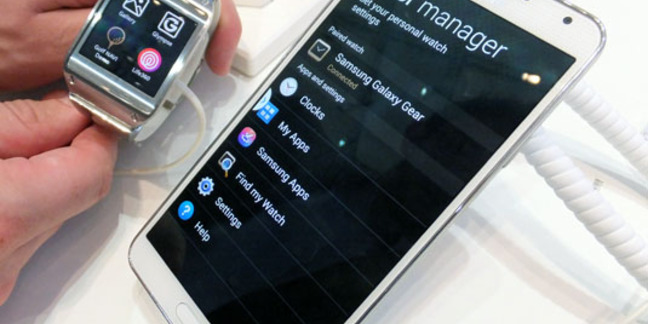 Updated Despite its much-ballyhooed kickoff, Samsung has sold far fewer of its Galaxy Gear smartwatches than it would have liked, sources say.

According to BusinessKorea, the smartphone kingpin has sold just 50,000 of the wrist-mounted gadgets since launching them in September, which translates into global sales of 500-800 units per day. Samsung disputes the figure*.

By comparison, in October Samsung announced that it had already shipped five million of its Galaxy Note 3 phablets, which went on sale at the same time as the Galaxy Gear.

The news is sure to come as a disappointment to other consumer electronics makers, many of which were hoping to capitalize on what has been described as an emerging market for smartwatches.

Companies as diverse as Adidas, LG, Nokia, Qualcomm, Sony, and even Nissan are all reportedly readying – and in some cases, have already shipped – smartwatch products of their own.

For Samsung's part, the South Korean firm reportedly rushed the Galaxy Gear to market in the hope of outflanking Apple, which for years has been rumored to be working on what many assume will be a category-defining smartwatch – although no such product has emerged from Cupertino so far.

If Samsung's Galaxy Gear sales continue the way they have done, however, Apple may not want to bother. Based on its current figures, the market for wearable wrist-computers may be far smaller than it initially surmised.

Then again, it may just be Samsung's design that turns customers off. In order to get any benefit from Galaxy Gear, customers must pair it with one of a short list of Android-powered Samsung smartphones. Owners of phones from other companies – such as Apple – need not apply. That's a pretty heavy commitment to ask of someone who's thinking of buying a smartwatch with a list price of $299 in the US.

Not that there is any shortage of Samsung phones out there. The South Korean company remains the leading supplier of smartphones worldwide, according to Gartner, with some 32 per cent of the global market.

But Samsung seems unlikely to replicate that success with Galaxy Gear, having sold the watches to less than 0.0007 per cent of the world's population so far. Perhaps another company can do better? ®

* Samsung has claimed that sales have actually topped 800,000 units since the Gear went on sale two months ago.