'Remember who I am and the loyalty I deserve,' bellows cloud supremo 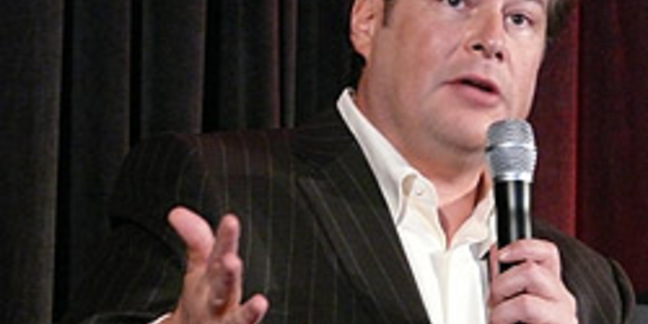 He is furious that bookstores fail to remember him when he buys a new book. He is angry that his former university doesn't blast his phone with a jingle when he walks on campus. He is perplexed that companies the world over are not recognizing him - business titan and innovator Marc Benioff - and trying to sell him more crap more effectively. And he wants to change this with his company's new 'Salesforce1' technology.

"Remember who I am and the loyalty I deserve!" he bellows in his keynote speech at Dreamforce 2013. "When I have a problem with my toothbrush is there a button that can get me connected to Philips to get that issue resolved?"

The lack of a Wi-Fi-connected adult-baby toothbrush is a serious issue at Dreamforce, and one that must be dealt with.

According to Benioff's customer management software company, this year is the dawn of "the internet of customers". There are "billions of them", a glossy promo video tells us, and the company's new Salesforce1 platform is going to help companies hunt these people down and "turn consumers into customers".

Benioff specializes in a kind of pitch that sees him talk of customers, of "connections", and of the essential moral good that lurks at the heart of his brash company. Before Benioff goes on stage, the audience is subjected to a surprise performance by Huey Lewis and The News – the favorite band of American Psycho's murderous protagonist-cum-corporate-poster-boy Patrick Bateman.

Benioff's speeches, and those of his lieutenants, are punctuated by the lobotomized cheering of Salesforce's acolytes, who are scattered through the keynote hall to give the impression of optimism where there are hangovers, and of enthusiasm where there are the Valium-stares of jaded execs and the cynical scowls of dyspeptic hacks.

"We're going through a technology renaissance based on the cloud, based on social, based on mobile!" Benioff reveals. People cheer.

At one point the chief asks the members of the thousands of non-profits and NGOs attending this year to stand up. The lights go on and we are all encouraged to cheer. At another point the Prime Minister of Haiti is brought on stage to show fealty to Benioff for the assistance Salesforce has provided to the nation through its charitable division.

"We want to see the spirit of Haiti and we want to see it rebirthed and happy and successful and doing cloud computing," Benioff says.

It's a lucrative strategy, and has helped the company make more money than ever before. Salesforce expects to make $5bn this year, and more than 130,000 cultists have signed up for Dreamforce. Its new 'Salesforce1' technology should let customers link up their systems and write apps on the company's systems, and better sell to customers. We see a demonstration during which a technician outfitted with Google's face-computer Google Glasss is able to receive data from the Salesforce cloud notifying him of a fault with some medical equipment, then can share photos of the fault back into the cloud.

In Salesforce-land, it seems, an ideal future is one where the oceans are being boiled by vast cloud-hosting data centers, which are churning over the endless streams of data companies are harvesting from a world of hapless, technologically unskilled consumers. The better Salesforce gets, the louder and more incessant capitalism becomes.

Perhaps the most striking thing about the keynote is not the technology – after all, Salesforce is just a solid database with a bunch of sophisticated data brokerage services – but Benioff, who has the aura of a cult leader.

The dead giveaway for this is the tremor that creeps into his voice when he mentions the customer, and the way his eyes well up whenever telling about how $GLOBAL_CONGLOMERATE has been able to use his firm's tools to sell more stuff more effectively to consumers. Salesforce is an arms dealer, companies like General Electric are the munitions buyers, and we are the prey. "Remember who I am and the loyalty I deserve," he said. ®