And it is selling like Hot Buns, insists chaebol

Samsung has scoffed at claims that it has sold hardly any of its shiny, pricey Galaxy Gear smartwatches.

And it has clutched Miley Cyrus’ knickers to its corporate bosom to help it shift even more.

The company’s UK wing yesterday tweeted: “Hey, Miley. You should have a look at our Gear,” and attached a picture of skimpy ladies’ underthings by way of illustration.

“For performers who usually have no pockets for a phone,” the Galaxy Gusset caption reads. Cyrus, a popular chanteuse, is famous for performing in her shreddies. 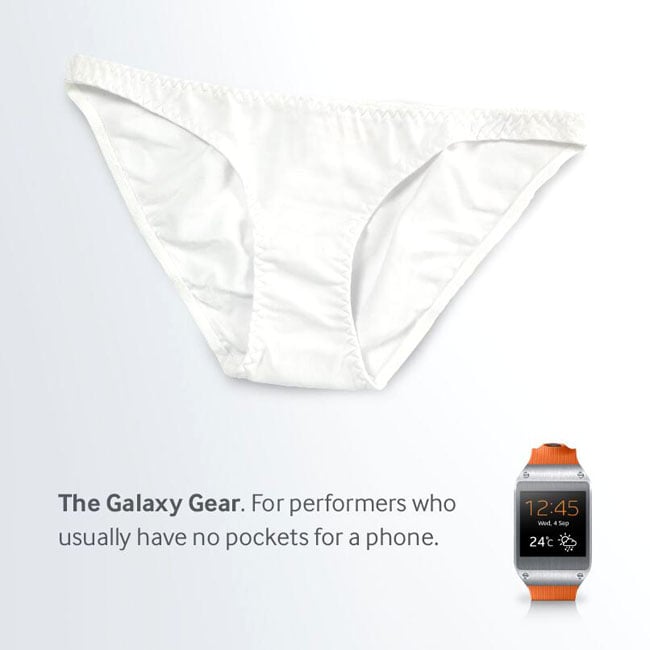 Samsung separately denounced as pants recent claims that too few of the smartwatches have ended up on punters’ wrists.

The company today claimed that sales have actually topped 800,000 units since the Gear went on sale two months ago – and not the mere 50,000 it was yesterday alleged to have persuaded punters to buy.

“It’s the most sold wearable watch available in the market place,” the company insisted today, adding that the Gear has been bought in greater numbers than even it expected.

“We plan to expand its availability by expanding mobile devices that work with the Gear,” the statement added.

As it stands, the Gear only connects to the Galaxy Note 3 phondleslab, which immediately puts a limit on the Android smartwatch’s applicability.

Samsung has already said it has shipped 5m Note 3s since 25 September, so that’s a Gear attach rate of 16 per cent, if Samsung’s numbers are taken at face value.

Samsung’s rebuttal follows a claim made yesterday by website BusinessKorea that the smartphone giant was selling 800-900 smartwatches a day on average since launch - 100 a day in its native South Korea - which makes for an attach rate of just one per cent.

Samsung may have beaten Apple and others to enter the market for what many are calling the “second... er... third... er... fourth screen” behind phone, tablet and telly - fifth, even, if you include laptops - but it’s by no means the first to do so.

Its best known competitor is Pebble, which has been shifting smartwatches since a high-profile crowd-funding campaign kicked off in 2012. As of 6 November 2013, some 190,000 Pebble smartwatches have been shipped to buyers, the company claims.

Though its watch is now also available through US giant Best Buy, Pebble predominantly sells direct, so that total is likely to reflect watches on wrist rather than devices sitting on shelves and in stock rooms.

Samsung’s figures, by contrast, are likely to be shipments into its resale channels - the giant didn’t clarify this point, but vendor-supplied data customarily covers sales to channels not sales to consumers - so its entirely possible both its numbers and those from BusinessKorea, which appear to be over-the-counter sales estimates, are not contradictory.

Here in Blighty, El Reg’s London Underground Test™ suggests there are more Pebbles out there than Gears, but not a huge number of either. ®