IPO officials are running scared of the angry web masses 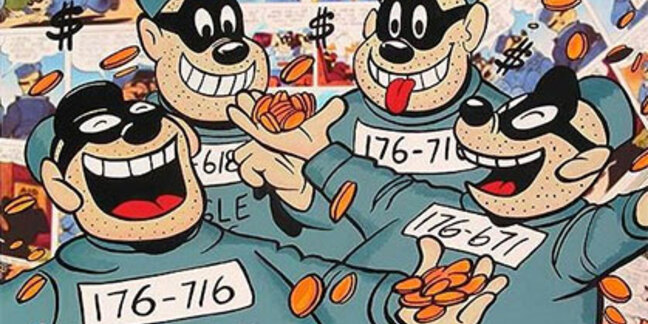 Analysis Remember the notorious ‘Instagram Act’? If you recall, clauses smuggled into April’s Enterprise and Regulatory Reform Act (ERRA) - in the name of allowing reuse of orphan works - paved the way for the Government to grab your photographs and other visual images, in breach of international conventions.

The mechanics of the scheme were promised for later in the year, to be detailed in a statutory instrument (SI).

We’re still waiting for that SI to be published, but the UK now set to have two separate orphan works laws, one of which - the Government’s - will be expensive to use. And illegal.

ERRA was dubbed the “Instagram Act” after Facebook’s social network changed its T&Cs last year allowing it to use people’s photographs any way it wanted. The name caught on, because ERRA set out the principles for a similar landgrab. Instagram backed down, but the UK Government didn't.

Of all the ways to free orphans, the UK chose the worst possible

The copyright clauses in the ERRA were devised to allow publishers, libraries and internet companies, for example, to use orphan works by gathering them into an extended collective licensing scheme, or ECL. Other countries have quite successfully dealt with the orphans problem (not always with an ECL) … and they’ve even introduced ECLs without any fuss at all. Yet the UK’s legislation caused an internet tempest. How so?

Other countries’ schemes were uncontroversial because they did not threaten “primary licensing” - the ability of an image owner to go to market and control how their work is used. They were tightly and respectfully worded. ECLs, in the rare instances in which they were introduced, were very narrowly-defined precision instruments.

For example, there’s one ECL that permits the transmission of material between two campuses of the same university. (Our law is better worded and doesn’t require such specifics). And orphan works schemes such as Canada’s are strictly concerned with “real” orphan works - very old, long lost black and white photos, for example, where the owner can’t be traced. That’s most people’s understanding of an orphan work.

However, the UK legislation failed to respect any of these concerns – and officials at the radical Intellectual Property Office agency who were drafting the legislation spurned several opportunities to narrow the scope of the legislation, which would have allayed fears of a landgrab.

The IPO officials failed to narrow the scope to ancient photos and images, which meant that almost everything floating around on the internet today, including everything that amateur photographers upload to Flickr or news sites like the BBC would have been swept into the scheme. As would millions of visual images owned by non-UK owners. Commercial use was not ruled out, either. In his review of UK copyright law Professor Ian Hargreaves had mooted (or the IPO had mooted on his behalf) allowing commercial use of orphans. Six groups representing US image owners promised a “firestorm of international litigation”.

That’s because the UK’s IPO doesn’t think intellectual property is any kind of property. So it can’t understand what the property-ish-ness of IP does out in the real world (it’s a boundary that enables trade), and thus why it’s useful to people. The consequences of the IPO’s self-inflicted intellectual straitjacket are reflected in its legislation. Trying to educate someone who refuses to believe in the virtues of property is like trying to teach a horse Latin. It may be the cleverest horse in the world, but it’s just not going to get it.

Pre-empting Brussels: legislators in a hurry

It was a puzzle what copyright clauses were doing in a garbage truck of a bill like ERR anyway - until you remembered the European dimension. The EU had decided to act on orphan works, by approving measures enshrined in the Orphan Works Directive in June 2012. This was an imperfect set of proposals, but it clearly outlawed “non commercial use”. Yet the Directive permitted a member state to retain any existing orphan works legislation already on its statute books. Realising this, the IPO made a frantic rush and three weeks later, announced that new orphan works clauses would be splattered over the then-new Enterprise and Regulatory Reform Bill (now Act).

To bring the story right up to date, the IPO has now written its statutory instrument, but fearing the wrath of the internet once again, has tightly controlled who can see it. Those who have seen it could not make a copy, or take a copy away with them. Sources confirm it’s now tightly shackled with clauses and safeguards that reflect image owners' concerns.

And that’s not all. A study published in the European Intellectual Property Review journal confirms that the ERRA landgrab is probably illegal under both UK and EU law - in several ways.

The analysis by Eleonora Rosati at the University of Cambridge titled “The Orphan Works Provisions of the ERR Act: Are They Compatible With UK and EU Laws?", concludes that they aren’t

The ERR doesn’t define an “orphan work”. The crucial phrase “diligent search” isn’t defined, although the legislation would create a new “diligent search auditing authority” - a neat bit of bureaucratic expansion by officials - and crucially, “the ERR Act does not impose any particular restrictions as to the acts that can be carried out by potential users of orphan works”. Anything goes, including commercial licensing, Rosati explains.

“The ERR Act has rather adopted an exception “in disguise” which – as such – contravenes both the CDPA [the UK's Copyright, Designs and Patents Act] and the [EU] InfoSoc Directive, or even deprives missing rightholders of their own intellectual property, contrary to Article 17 of the Charter of Fundamental Rights,” she concludes.

In effect, the legislation gives the secretary of state the power to grant a license over something that doesn’t belong to the secretary of state. This is clearly, honkingly, clown-sized-shoes illegal. Only the owner of a work can license their property. Neither the CDPA nor the InfoSec directive permit it. It deprives the owner of a sole and exclusive property right.

In addition, Rosati notes, Article 17 of the Charter of Fundamental Rights states that:

“[e]veryone has the right to own, use, dispose of and bequeath his or her lawfully acquired possessions. No one may be deprived of his or her possessions, except in the public interest and in the cases and under the conditions provided for by law, subject to fair compensation being paid in good time for their loss”

So IP isn’t an absolute right - few things are. But again, the problem is the IPO’s fantasy view of copyright as something that isn’t a property right. The subject of compensation is not mentioned in the ERRA.

With the as-yet-unpublished Statutory Instrument entailing a process so complicated and expensive "it will be cheaper to use the photo without permission and be sued for doing so," one source told us. If that's the case, few will use it.

IPO officials have been briefing that the UK will, after all, introduce Europe’s Orphan Works Directive alongside ERRA. It's EU law, so it doesn't really have a choice: it can prevaricate or bite the bullet.

Perhaps officials fancy another bite at the cherry (their third, after the failed orphans clauses of the 2010 Digital Economy Act and the ERRA) - the cherry being rewriting copyright law. Although Vince Cable’s Department of Business, Innovation and Skills has the IPO under a much tighter leash these days.

The ERRA fiasco has been a reminder of what copyright is really for, and who benefits when it's weakened. This reality is a universe away from what the tech blogosphere thinks copyright is about.

Without copyright, everyone can profit from your work except you. It's a powerful individual right, designed to protect the individual from exploitation. The “git” ripping you off may be a record company, or may be a tech company, or may be a bureaucrat - as in this case. So your existing rights are simple, powerful and give you cheap access to justice. When these rights are eroded, or the ability to exercise them is eroded, people push back very hard. As the UK government has just learned - the hard way.

Everything you wanted to know about the Instagram Act, but were afraid to ask - an FAQ.

Bad news: So much of your personal data has been hacked that lesson manuals on how to use it are the latest hot property

Cyber-crims bone up on methods for fun and profit, but mainly profit