Less than a week after EMC put its bought-in all-flash XtremIO array on sale, NetApp has boosted the power of its Engenio all-flash array product by adding the EF550 above the EF540 in its line-up.

These Engenio or E-Series arrays are sold to customers who need faster data access than the FAS series can deliver, and without Data ONTAP bells and whistles. The EF540 is NetApp's first all-flash array and many view it as a stopgap until its completely new and in-house developed FlashRay arrives. That day is not today.

NetApp wants us all to realise that the EF550 "delivers high performance and consistent low latency for business-critical applications for which responsiveness and enterprise reliability are critical." It repeats the phrase again and again in its release.

Your humble Reg hack thinks he's got a handle on this: the EF550 delivers enterprise-consistent low performance and high latency for business apps needing critical reliable responsiveness. Is that right? [No - sub-ed]

Let's stop poking fun at NetApp's marketing, and simply say the EF550 is a go-faster EF540. It has:

And that's basically it. As before there is no deduplication or compression and, as before, we're waiting for FlashRay.

Get an EF550 datasheet here [PDF]. Amusingly, this datasheet lists the EF550 as having disk drives: 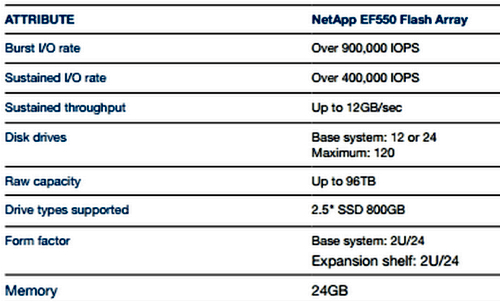 You just know where NetApp's comfort zone is when gaffes like these happen.

Meanwhile, the E2700 can be roughly thought of as a go-faster E2600. The main differences seem to be:

Faster interfaces and a slug of SSD speed make the thing go faster.

The E5500 get a facelift with maximum capacity raised to 1.5PB from the previous 1.2PB. It has 16Gbit/s FC interfaces but not 12Gbit/s SAS, making do with 6 gig instead. There are also 10GbitE iSCSI and 40Gbit/s InfiniBand as before. There is a data sheet here [PDF] and one for the E2700 here [PDF]. This doesn't seem much of a refresh.

There was no pricing or availability information at this time. ®