BAD ALTITUDE: The highs and lows of Doctor Who 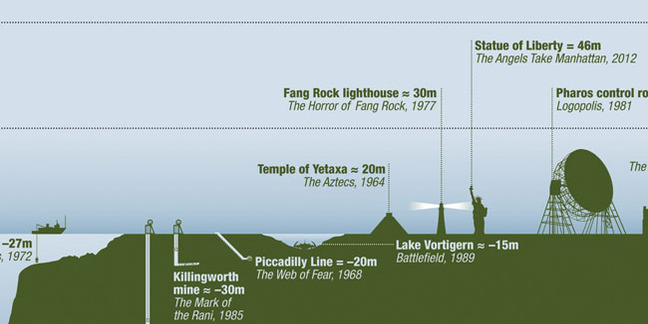 Doctor Who @ 50 The Doctor’s many visits to Earth have seen him not only venture around the globe but also far above and below its surface.

Early on he was high in the Pamir Mountains, the highest peak of which reaches 7,495m, although the pass in which the travellers first met Marco Polo was probably nearer 4,200m — high enough for the elderly Doctor to succumb to altitude sickness.

By comparison, the top of the Temple of Yetaxa was likely a mere 20m above the ground, offering grand vistas of the Aztec city but tiring to climb – and not a pleasant drop for Ixta.

The Tardis touched down briefly at the top of the Empire State Building in The Chase. Although the tour guide claims they’re on floor 102, it’s clearly the observation deck on the 86th floor, at 320m – and as he exaggerates the height of the skyscraper, he's an unreliable guide.

The Doctor’s first venture into the depths of the planet came early in his second incarnation when he landed on an island near the Azores and was transported some 1,000m below sea level – based on the average sea depth in the area – to the remains of Atlantis.

He would later descend an unknown distance into Euro Gas Refinery’s impeller shaft to confront the Weed Creature, shortly after evading Yeti on London’s Piccadilly Line just 20m below the surface. An earlier encounter with the robotic beasts had been his highest Earth adventure, around 4,600m above sea level in the Himalayas.

The Third Doctor was soon trying to make peace with cave-dwelling Silurians, some 250m down based on the depths of real Derbyshire cave systems, but nothing compared to the 32,187m (20 miles) Professor Stahlman’s Inferno project had almost drilled through the Earth’s crust. The Doctor himself didn’t go that deep but the goo that came up the bore was not pleasant.

The Fourth Doctor’s encounter with the Zygons took him into the murky depths of Loch Ness, 227m at its deepest. Fang Rock lighthouse was probably around 30m, easy enough for a Rutan to climb, and nothing compared to the top level of Paris’s Eiffel Tower at 273m, from which the Doctor and Romana flew – or did they take the lift?

If the Doctor wasn’t scared of heights then, he soon had cause to be, falling to his fourth ‘death’ from the gangway of the Pharos Project radio telescope. Based on the similar Lovell telescope at Jodrell Bank, this would have been a plummet of some 40m.

The Doctor subsequently avoided high places – regenerative trauma presumably clouding his fear when he climbed up to the city of Castrovalva – but happily explored some caves where the Cybermen had planted a bomb – unknown depth but the troopers carry no climbing equipment – and visited SeaBase 4 at the bottom of an unknown body of water.

The Sixth Doctor narrowly avoided a one-way trip down a mine shaft, although the one he landed the Rani’s Tardis in was likely not more than 30m deep as it was a drift mine with a ground-level entrance.

The Seventh Doctor visited King Arthur’s spaceship below the surface of Lake Vortigern — some 15m deep based on the reservoir where Battlefield was taped.

The Tenth Doctor was understandably tentative when he had to climb Alexandra Palace’s 67m transmitter – already atop a 24m-high building – being his first time that high since he visited the Pharos Project. He later learned 1 Canada Square in London’s Canary Wharf was built to reach an anomaly 183m above sea level. So why they kept building to 235m is unclear.

The Eleventh Doctor took the Tardis more then 21,000m below Cwmtaff in Wales to rescue Amy from the Silurian base there, but was later back above ground marrying River Song at the 139m apex of the Great Pyramid of Giza on a time-collapsing alternative Earth. From there the 46m-tall Weeping Angel Statue of Liberty wouldn’t have seemed half as frightening as it did close up from the roof of a 16-storey New York apartment block. ®