You're not ready for what's next

The ever-chirpy Mars One team is working hard to play down the dangers of radiation.

But should you succeed in reaching Mars, it’s safe to assume nothing that you’ll have trained or equipped yourself for will really have prepared you for what’s next. It may be the second-most-habitable planet in the solar system for Earthlings, but it’s still an extremely hostile environment that space agencies can currently only size up using Rover data, and which they are entirely unable to replicate here.

Words like dry, cold, windy and volatile cannot really do the place justice. Gravity is about 38 per cent that of Earth, and temperatures average around -60°C (-76°F). Low thermal inertia contributes to freezing winds estimated to be upwards of 90kmph (60mph). Abrasive dust storms lasting months on end were witnessed by Mariner 9 in 1971. And although there is some water vapour in the atmosphere and perhaps two per cent by weight in surface soil, the atmosphere is mostly carbon dioxide. So CO2 snowfall is a possibility.

This November NASA plans to send its MAVEN (Mars Atmosphere and Volatile EvolutioN) probe to orbit the planet and study its atmosphere to judge its history of depletion, its evolving climate, the current state of upper atmosphere and ionosphere, and the ongoing effects of solar winds on water and volatile compounds. This should provide insights that give scientists a timeline of reference, but is unlikely to discover any silver linings for Mars pioneers.

For now, those testing technology for prospective missions to Mars only really have the Haughton-Mars Project to help them approximate as close as possible the conditions of Mars on Earth. NASA and the Canadian Space Agency (CSA) tested prototype Mars spacesuits in this Canadian high-Arctic impact crater in 2000, but harsh as this polar desert setting is, it doesn’t come anywhere even close to the extreme conditions of Mars. Still, techies have to start somewhere. 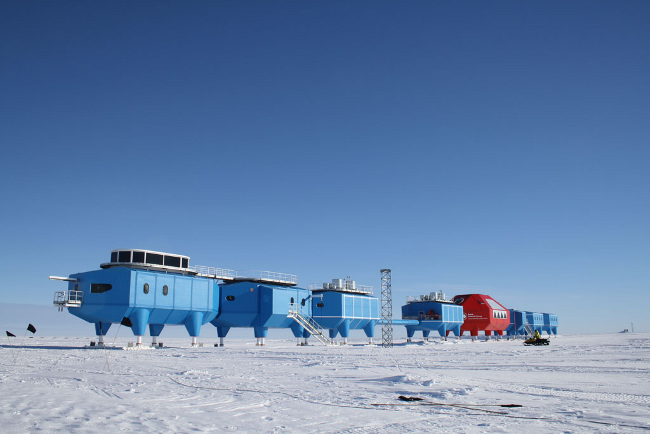 The Halley Research Station - a podular model for off-world living

Could you live on Mars? The ultimate goal is obviously a thriving Mars colony – a permanent, largely self-sufficient base populated by humans, with sporadic new arrivals from mother Earth to enrich the community. But is this vision really any nearer to reality than it ever has been in sci-fi or our dreams? While speaking hypothetically with the Institute of Physics, Dr Richard Zurek, chief scientist in the Mars Program Office at NASA Jet Propulsion Laboratory (JPL) reckoned the combination of extreme cold, lack of oxygen, and higher than usual levels of radiation would confine astronauts to enclosed vehicles and occasional walks in spacesuits before assembling the first buildings.

The next step would be to sort out a power source, which Zurek suggests could be "either a few acres of solar panels or maybe a nuclear power plant". Using this energy, settlers could in theory extract oxygen and water from the atmosphere and surface minerals, while working on sourcing any subterranean frozen water reserves.

Mars One would build its shelters underground to reduce exposure to the elements, which isn’t a bad plan. But for now the only solid experience we have of developing basic habitats for survival in conditions even approaching such extreme levels, is at arid research stations. NASA is still testing landscape habits out in the Arizona desert using hard cylindrical shells for radiation protection, and inflatable living quarters for comfort. And since February 2012, the British Antarctic Survey has been based in the incredible-looking Halley VI station, a string of eight modular buildings on stilts with ski feet.

These pods cope with lows of -55°C (-67°F) and high-speed winds armed with abrasive ice particles. Each of these building projects weighs, well, as much as a house – but it’s Earth-bound work like this that continues to further scientific understanding and spark conceptual ideas for space habitation. Until subsequent generations can master terraforming and begin warming up the Martian atmosphere, ingenious habitats are the only way forward.

Will you get back to Earth?

Propulsion on any space mission is generally thought to be the “easy bit”, but that’s only relative to the extreme difficulty and danger of launch, landing and living. Deep space is a hostile place more than capable of irradiating and emaciating humans over very short periods of time.

It’s difficult enough to send a functional object into Earth orbit. It’s incredibly more complex to get a payload such as an exploration rover safely to Mars. Pushing a 1,000+ tonne deep space vehicle full of astronauts, life-sustaining supplies, landing craft, habitat materials and other equipment out of Earth’s atmosphere to travel for half a year and around 35 million miles (56 million km) to Mars, is currently impossible. Planning to bring any of our plucky pioneers back isn’t even in the reckoning.

Going to Mars, or even into space, would be a high-risk-high-reward experience, especially for science fans. And it's certainly a possibility, even if remote at this stage. Jumping into a ship, swooping through the Martian dust clouds and dropping back into suburbia without a scratch and in time for tea and Doctor Who? That's going to be another matter. ®