From now on, you'll need solid state to beat this thing

Kaminario has taken the SPC-2 streaming storage benchmark, shook it hard, wrung it out, and left everyone else for dust with its K2 all-flash array, with a result nearly twice as fast as the previously top-ranked Oracle ZFS array.

The SPC-2 benchmark tests a storage array's streaming IO performance whereas the companion SPC-1 benchmark tests random IO performance. Kaminario's K2 v4 array beat everyone else on that benchmark recently. It used the same configuration device, with SanDisk SSDs, on the SPC-2 test and scored 33.477.03 MB/sec with a price/performance of $29.79/SPC-2 MB/sec.

The top streaming data results are:

Kaminario's has the fastest streaming data flash box on the block, but not the most cost-efficient. It is rated only eighth in the price/performance list:

We charted some of the different vendors' MB/sec and price/performance numbers to provide a graphic comparison. Goodness - the fastest performance and lowest price - is located in the lower right corner: 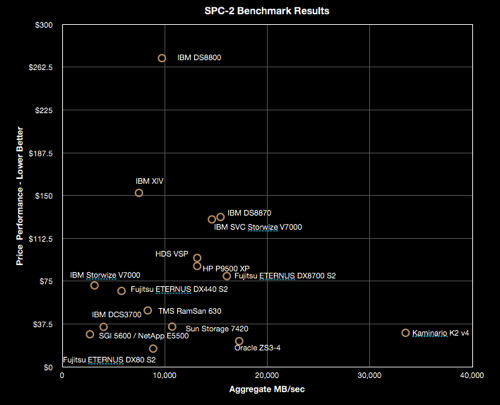 As the chart shows, Kaminario is way out on a performance limb and it is extremely unlikely that any disk drive array could catch it. The road to SPC-2 performance is paved with solid state storage from now on. ®