Nanofluid could be attracted to the heat it exists to dissipate

Serious water-cooled gamer-rig types will probably get busy experimenting with iron filings, water and magnets, to see if they can maker-reproduce research that uses magnets to create what amounts to a switch-on, switch-off heatsink.

In a paper co-authored by researchers from MIT and Australia's University of Newcastle, the researchers find that a slurry of magnetite nanoparticles in water can drastically improve the heat transfer, and can be controlled with magnets.

In its ambient state, the nanofluid can be simply pumped through tubes as a normal water cooling system.

As the researchers put it in the abstract of their paper, the magnetite in the slurry lets them create a “laminar flow regime”. If, for example, a hot spot is detected, magnets can be used to attract the nanoparticles in that direction, and the particles will carry heat away more efficiently than water alone.

The researchers claim a four-fold improvement in heat transfer with the magnets activated, but the concentration of particles has only a small effect on the water pressure (a pressure drop of 7.5 per cent was recorded when a magnetic field of 430 milli-Tesla was applied, with a gradient between 8.6 and 32.5 mT/mm).

As MIT notes in its media release:

“Such a system would be impractical for application to an entire cooling system, she says, but could be useful in any system where hotspots appear on the surface of cooling pipes. One way to deal with that would be to put in a magnetic fluid, and magnets outside the pipe next to the hotspot, to enhance heat transfer at that spot.” 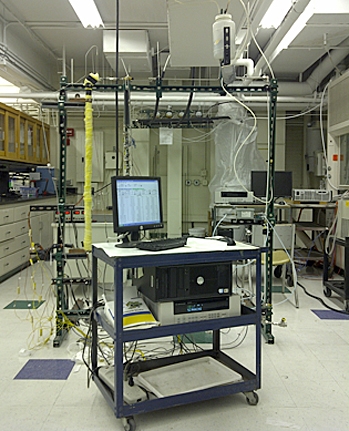 This ability to localise the nanofluid's heatsinking ability, the researchers say, could reach all the way down to consumer electronics.

The team included MIT's Jacopo Buongiorno, Lin-Wen Hu and Thomas McKrell, and Elham Doroodchi, Behdad Moghtaderi, and Reza Azizian of the University of Newcastle in Australia. ®