MY EYES! Earth engulfed by BRIGHTEST EVER killer gamma-ray burst

Earth has been bathed in its largest recorded burst of gamma rays after a star in the constellation Leo, 3.7 billion light-years away, collapsed in on itself to form a black hole.

"This burst was a once in a century cosmic event," said Paul Hertz, director of NASA Astrophysics Division at a press conference on Thursday. "The burst topped the charts in terms of duration, number of gamma ray photons, the energy of the gamma ray photons, total explosion energy, and radiance. It produced the second brightest optical flash every detected from a gamma ray burst."

The blast of energy came from a star, estimated to be between thirty and 100 times the mass of our Sun, running out of fuel and collapsing in on itself to form a black hole that is estimated to be between one and ten solar masses. As it imploded the star sent out beams of high-energy gamma rays equivalent to 25 billion electron volts – 500,000 times the energy of the Sun's light on the Earth's surface. 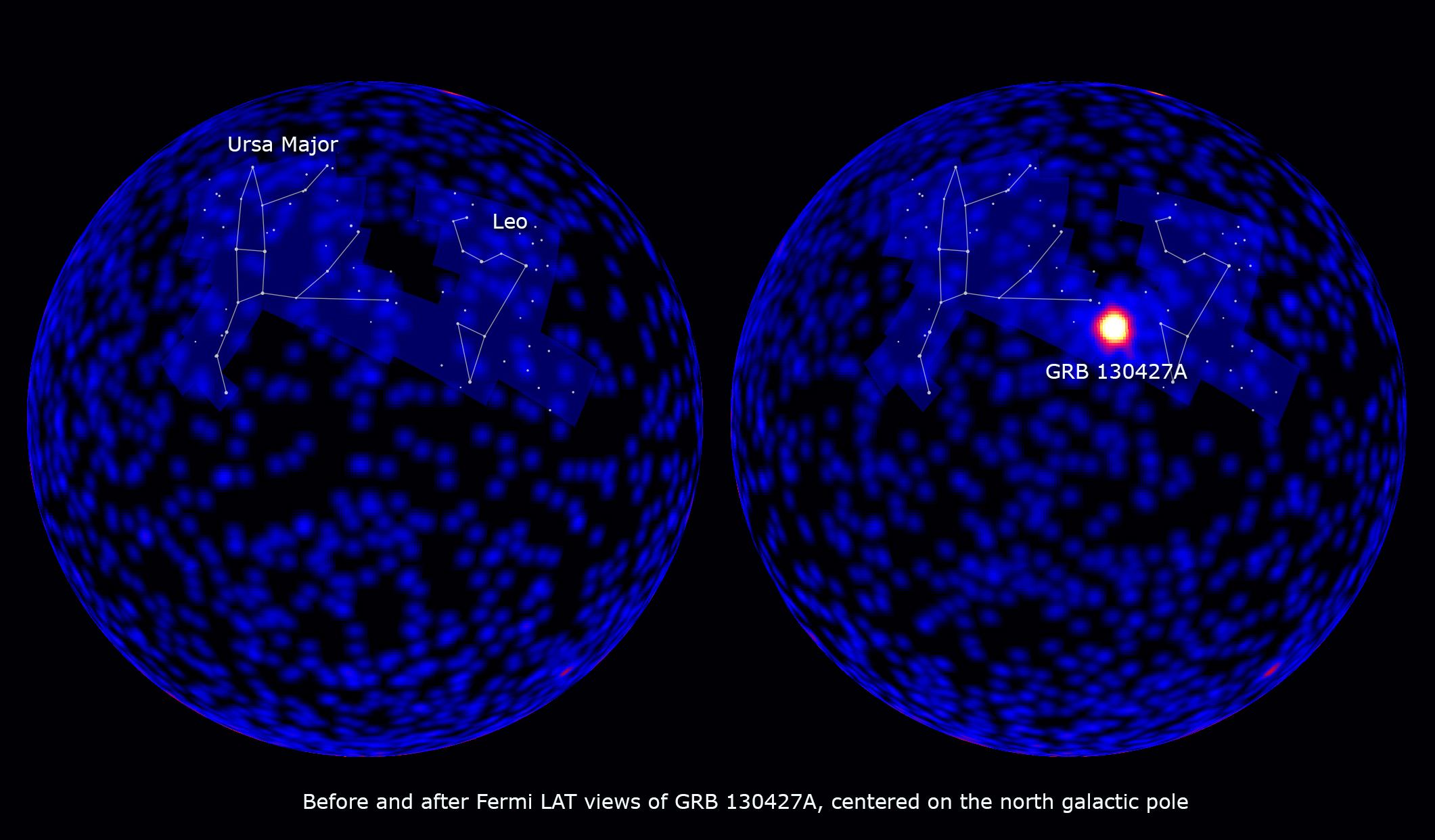 The cosmic rays reached our world on April 27 in an event named GRB 130427A. The initial emissions were picked up by the Fermi Gamma-ray Space Telescope in low Earth orbit: its Large Area Telescope picked up 20 hours-worth of gamma rays as they barreled through the universe.

The early warning and the gamma rays' extreme duration (20 hours as opposed to the previous record for gamma ray detection of 100 minutes) allowed an array of Earth-bound and orbiting telescopes to focus on the unusual event, and international teams rushed into action.

The Rapid Telescopes for Optical Response (RAPTOR) in Los Alamos caught an 80-second flash of light from the Leo constellation and was able to analyze the final light from the doomed star. The recently launched NuSTAR orbital telescope was also deployed to investigate the unusual phenomena.

The GRB 130427A event wasn't so bright because it was especially large, in universal terms, but because it was so close to Earth and our planet was in the right plane to catch the emissions. The data the telescopes harvested has, however, caused cosmologists to think again how stars collapse and black holes are formed.

It had been thought that the highest energy gamma rays emitted from such supernovae are formed by the internal shock of a star collapsing in on itself. But it now appears that higher energy rays are also generated as material is ejected from a dying star at near light speed and slams into other objects on the way, creating new waves of energy. 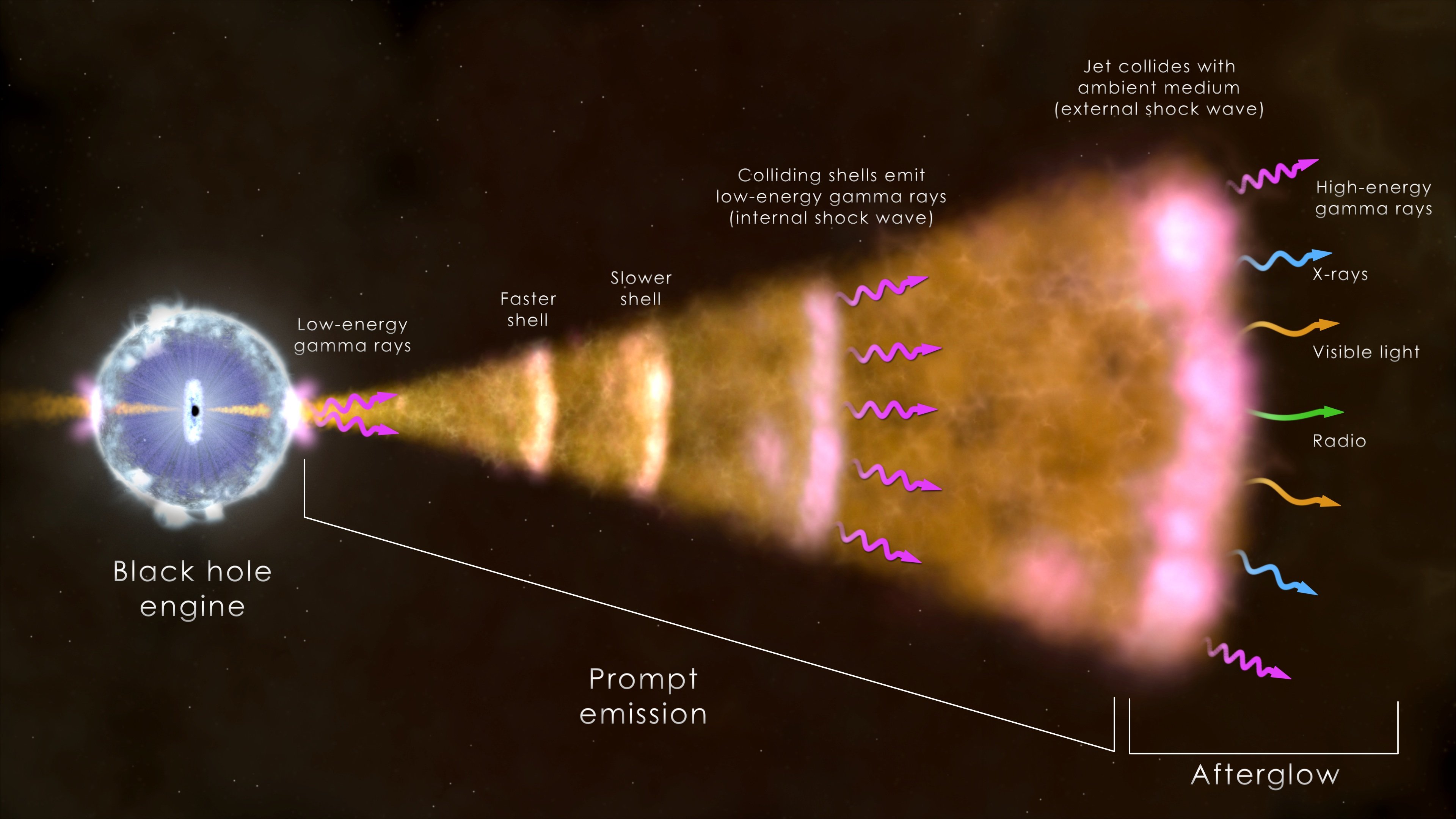 Back to the drawing board for astrophysicists (click to enlarge)

"Our understanding has been challenged," said Chryssa Kouveliotou, an astrophysicist at NASA's Marshall Space Flight Center.

"We have to go back to the drawing board and understand the physics of blast waves moving close to the speed of light and how they generate particles of very high energies and generate magnetic fields. One thing at this point is certain - a lot of theories will have to work hard and go beyond our current understanding to accommodate these results."

Gamma rays bursts aren’t just objects of esoteric interest – they have the potential to harm or even end life on our own planet. Had the GRB 130427A event happened in our own galaxy then Earth may have been very seriously affected, possibly to the level of it being an extinction event for humanity.

Such events may have happened in our past. Around 450 million years ago the Ordovician–Silurian extinction event killed off masses of marine species on Earth and there has been speculation that the cause was a nearby supernova. But before you panic, Chuck Dermer, an astrophysicist at the Naval Research Laboratory, explained that there are several problems with this theory.

Gamma ray bursts of the type demonstrated by GRB 130427A generally occur in galaxies with relatively few stars that have a low metal content. By contrast our Milky Way has a much higher metal content and appears to produce much lower rates of stars that emit gamma rays when they die.

That said, April's event did have a brief but noticeable effect on the Earth's ionosphere. But if there were any inhabited worlds much closer to the dying star then they would be in for a very rough ride indeed. ®