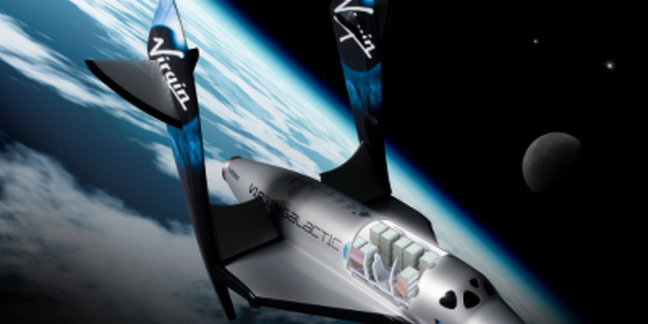 In a grainy Skype call from his idyllic Necker Island paradise, the multi-platform mogul told CNBC today that his high-altitude zoom-zoom firm would let people pay for their lifts in bitcoin.

"Why not?" he said. "It's a new exciting currency. A lot of people who got into Bitcoin quite early on have made quite a lot of money and are already interested in going to space."

The first customer to have paid in Bitcoins is a stewardess in Hawaii "who made quite a lot of money by getting into Bitcoin early on," Branson said.

Branson has confidence that Bitcoin will go higher, as the systems controlling the crypto-currency limit the total amount of Bitcoins in circulation. This prevents the money printing (excuse us, "quantitative easing") that central banks indulge in to doom subsequent generations to crippling inflation ("stabilize markets").

"I think one day [Bitcoin] will settle at a price that will be higher than the prices it's at today," the beardie billionaire said. However, upon receiving the stewardess's funny money, Virgin Galactic did immediately transfer it into clammy, green US dollars, he said.

US politicians are holding hearings into the crypto-currency, and some have publicly fretted that Bitcoin wallets may "replace the Swiss bank account." Watch out, future Virgin Galactic space cadets, your next space buddy may be Keyser Söze. ®

SpaceShipTwo goes faster and higher than ever before

Psst... Wanna buy some stock in a spaceplane company? Virgin would like a word

Roundup Also: China trumpets the return of its new capsule and Cygnus has left the station

Beardy Branson's bird not cleared for takeoff just yet, but hopeful of flight tests soon

Video And pops the sound barrier for good measure

Branson on Virgin Galactic fatal crash: 'Space is hard – but worth it'

Vid Branson: 'We are determined to find out what went wrong'