The card micro that makes connecting projects to the cloud easy

Review Most products’ origins are prosaic: an inventor or a suit spots a gap in the market and attempts to fill it. Other products, however, have rather more bizarre beginnings. A case in point: Electric Imp came about because co-founder Hugo Fiennes wanted to connect the lights in his new bathroom to the internet.

That’s just the kind of slightly bonkers project that members of the world’s maker community like to tackle. With the world’s first in-car MP3 player, the Empeg, to his credit, not to mention his role coaching the team behind the first four iPhones, Fiennes figured he had the savvy to link his lights to online data sources in order to, say, change the colour to match the weather forecast or Google’s share price. 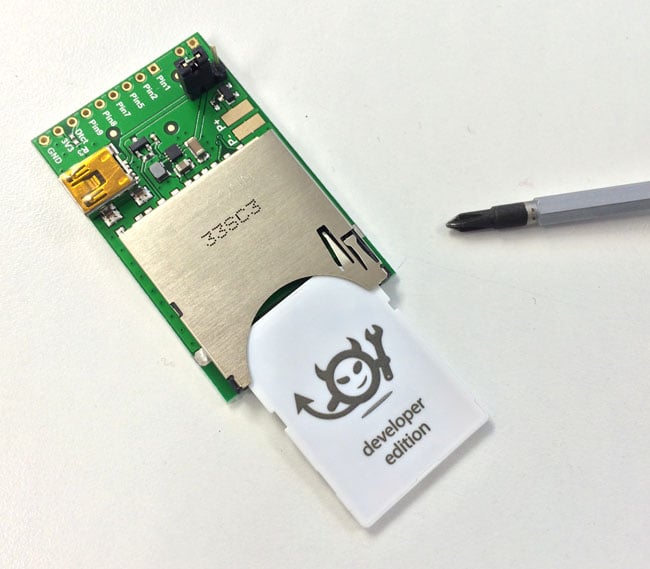 Electric Imp’s Imp: enabling the Internet of Things in an SD card case

But it proved a more complex job than it needed to be. Directly coupling off-the-shelf networking hardware to your electronics isn’t easy, yet it's necessary if you’re to base a project around something more power efficient than a tiny computer running a full OS needed to control a USB or PCIe Wi-Fi adaptor.

Fiennes’ thinking brought him to the notion of a very small wireless device that could be readily integrated into a project to allow the maker to focus on the electronics and not to have to worry about connectivity, protocols, web and app integration, and all that malarkey.

Conveniently for someone of an entrepreneurial bent, the doohickey might also appeal to commercial product developers looking for an easy way to bring new or existing kit into the Internet of Things. Makers and manufacturers, Fiennes’ concept could serve them all.

Fiennes formed Electric Imp to create the gadget, today called the Imp; its lightweight operating system, ImpOS; and the server technology - Imp Cloud, would you believe? - that would allow hardware to operate smoothly over the internet. Founded in 2011, the company kept its head below the parapet until 2012, and it’s been a visible if small startup since then. 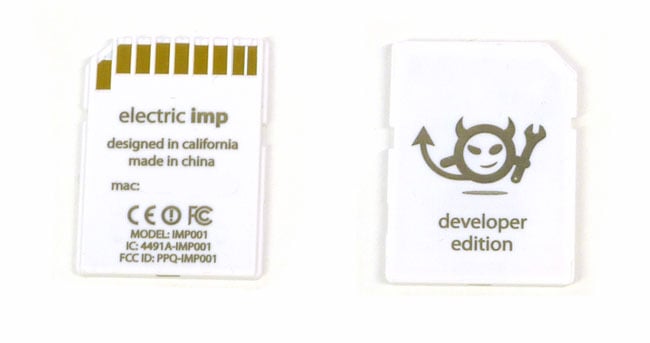 The Imp itself is an SD-like card that contains a 32-bit ARM Cortex-M3 processor core, 160KB of memory - the firmware takes up about 80KB of that, leaving the rest for program code - and a 2.4GHz 802.11n Wi-Fi transceiver. Electric Imp reckons the CPU is good for all but the most demanding of computational tasks. (Fiennes should know: he wrote communications software for ARM-powered Acorn computers in the 1990s, and his company The Serial Port produced various hardware add-ons for the machines.)

There’s not much the way of a GPU, of course, but there is a status LED. There is also an optical sensor to pick up configuration data flashed up on a phone’s display, a process Electric Imp calls “blinking up” the device.

I say the Imp is “SD-like”: looking at it, you’d never think it wasn’t an SD card. It’s not - Electric Imp is simply taking advantage of the off-the-shelf card design and associated slot mechanisms to ease the implementation of Imp in third-party products. So don’t try and stick it in your camera, OK? That said, the Imp’s connectors are electrically compatible with a real SD card, so it won’t do any harm.

The Imp itself is, like a newborn, largely useless on its own. It needs a source of sustenance and a mechanism for communicating with the outside world. Commercial users will slip an Imp into a slot inside their product; makers will want an “Impee”, which is the generic name for small breakout boards able to take an Imp, feed it with power and convert the SD format’s connectors to a set of GPIO pins. 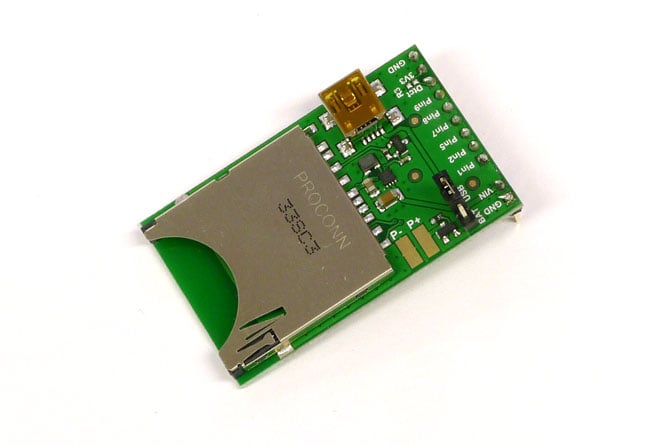 You can power the Imp by Mini USB or battery

Electric Imp’s own, developer-centric Impee, dubbed ‘April’, sports a spring-loaded SD slot necessarily trimmed back so the metal doesn’t interfere with the card’s Wi-Fi signal. The antenna is located at the end of the card away from the connector pins. The Impee features a mini USB port for power – not data, though - but it also has positive and negative terminals for hooking up a battery. A jumper on card lets you specify which of these two power sources to use.

Finally, there are 11 holes into which you can solder pins to allow the board to be hooked up to ribbon cables or, in my case, fitted onto a bog-standard solderless breadboard.

The Impee’s not yet ready to be hooked up to electronics projects yet – the powered Imp needs to “blink up” first. For this you’ll need Electric Imp’s mobile app, which allows you to prime the Imp for the wireless network it’ll be connecting to. It’s available on Android and iOS; it was recently updated for iOS 7.

Next page: Blink me
Page: