Does the BBC still dislike Doctor Who the way it did back in the 1980s? Its presentation on iPlayer of this past Saturday’s 50th anniversary special, Day of the Doctor, suggests it might do. The 3D version is giving us headaches and eye-strain, allege eager Whovians.

The format chosen for streaming the show in a form suitable for 3D TVs, computers and tablets is "side by side": each transmitted frame contains left- and right-eye images alongside each other. The receiver splits the frame into two down the picture’s vertical centre and presents one and then the other. Stereoscopic glasses make sure the correct eye sees the correct image.

You can see how it works in the screenshot below. 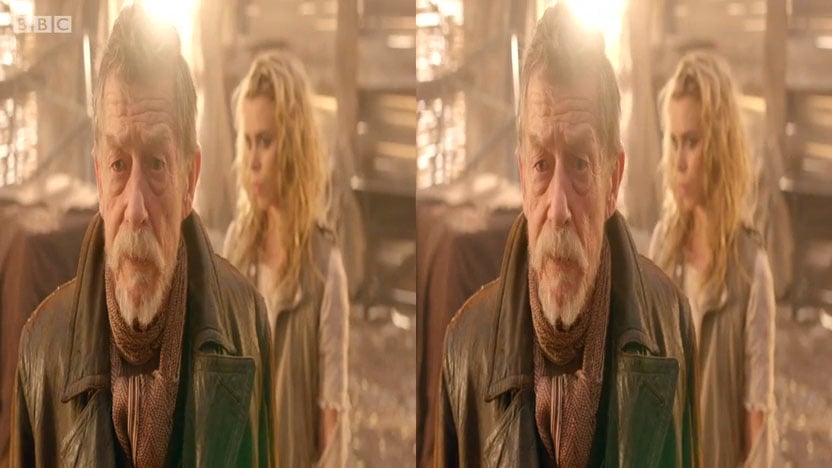 You’ll also notice that the BBC’s station identity logo – aka the Digital On-screen Graphics, or DOG – only appears on the left-eye image. It never appears in the right eye.

This oversight “is not only mangling the 3D stereoscopic effect”, as one annoyed Who fan puts it, “it also causes some nasty eye strain as your brain tries unsuccessfully to make sense of the half there, half missing, image being presented to alternate eyes”.

The upshot: headaches all round, say 3D buffs.

Some have reported the irritating glitch to the BBC’s technical team, but as yet without response.

Whatever it really thinks about Doctor Who, the BBC certainly isn’t keen on 3D. The transmission of The Day of the Doctor is the Corporation’s final 3D broadcast for the time being, because British viewers – even those with 3D-capable tellies – haven’t been tuning in to BBC 3D programming.

The "mangled" 3D version of Day of the Doctor is available on BBC iPlayer until 1 December. ®

Thanks to Reg reader Stuart for the tip