If your spooks aren't tapping Merkel, you should fire them really 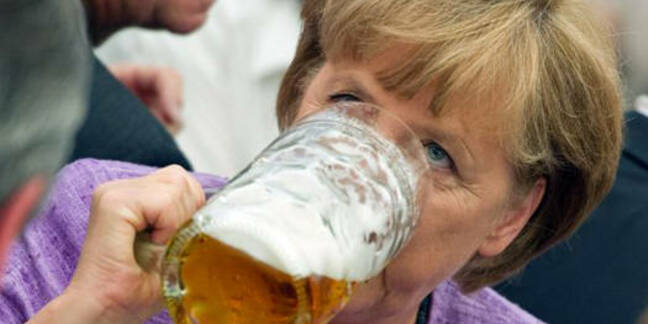 The bugging of the premier's BlackBerry by the US provoked an international diplomatic incident and a promise by the Obama administration to lay off in future. But the phone was also under surveillance by the Russian, Chinese, North Koreans and Britain's GCHQ, according to Focus. The German government has declined requests to comment on the report.

It's unclear whether some strain of mobile malware or over the air interception was at play in the apparent hackfest against the German's leader's mobile (which now even has its own parody Twitter account). Cloned phones and manipulation in telephone exchanges were used to tap the mobiles of Greek politicians around the time of the Athens Olympics, suggesting one possible communications interception technique.

Berlin, arguably the epicentre of Cold War intrigue, remains a focus point for spies. Quite apart from electronic surveillance, foreign human-intelligence agencies are always busy trying to recruit German politicians, civil servants, military personnel and scientists as agents, with the Russians particularly active in the field. It's known that a "high-ranking official in the ministry of finance" was secretly working for the British Secret Intelligence Service (aka "MI6") during the 1990s*, and this individual is unlikely to have been the only such mole.

German intelligence officials reportedly plan to strengthen their counter-surveillance capabilities in response to revelations about NSA spying on Germany's long time political leader. Both the Russian and UK embassies in Berlin are suspecting of running electronic eavesdropping. The existence of a GCHQ listening nest located outside Blighty's Berlin embassy was leaked by Snowden, since when it has become the subject of several picture special stories.

Christopher Soghoian, principal technologist and senior policy analyst at the ACLU, said in a series of updates to his personal Twitter account that the security shortcomings in Merkel's mobile set-up should have been apparent. The vulnerabilities offer lessons for other political leaders, he added.

"Even if the US stops tapping Merkel's phone, other countries will continue," he said. "The solution is encrypted phones for all."

"If Russia & China are tapping Merkel's calls in Germany, they've gotta be doing the same to politicians in the US. The smartphones that members of Congress use to to call, tweet (and in some cases, sext)? They are no more secure than Merkel's," he added (here and here).

Soghoian added that for years German security researchers have "warned about the ease of cell phone interception [but] the German government ignored them", pointing to research presented at the Chaos Computer Club conference three years ago by Karsten Nohl to support his point.

In related news, a WSJ article on how the Snowden revelations have shaken the NSA notes in passing that the bugging operation against Merkel was done to "fulfil intelligence requests from the State Department", according to two unnamed officials.

The story also notes that NSA director General Keith Alexander offered to resign shortly after Snowden outed himself as the source of leaks about the agency's work. However Obama administration officials turned down the offer out of concerns "that letting him leave would wrongly hand Snowden a win", according to an unnamed former defense official. ®

*The former British spy Richard Tomlinson let this slip in his memoir of life in the SIS, The Big Breach (readily available online). The German mole was apparently codenamed ORCADA and had his own dedicated case officer in the British embassy, who - unusually - was not known to be a spook by the normal diplomats.