Feature The chip designers at ARM Holdings have turned the computing world upside down, shaken Intel to its core, pulled AMD into its orbit, and broadened its range beyond mobile into every nook and cranny of the digital world, from toys to servers.

But where did this UK wonder company come from? How does it earn its living? And how did Apple help create the company that helped Steve Jobs save Cupertino from annihilation?

At the recent ARM TechCon developers conference, ARM's training and education manager Chris Shore answered those questions and more – such as what "ARM" stands for.

"ARM doesn't stand for anything," he said. "Officially, it stands for nothing. It used to stand for Advanced RISC Machines, which was the company's first name on its foundation. Prior to that it stood for something else – it stood for the Acorn RISC Machine, because the original architecture was actually designed by another company, called Acorn."

However, when ARM joined the NASDAQ and London's FTSE stock exchanges in 1998, the name was officially changed to ARM – which stands for, well, just ARM.

Shore said that he continues to be asked whether ARM makes chips – which, of course, they don't. They create and license designs for a broad range of chips. "If you phone us up and say, 'I'd love to buy a Cortex-A9, how much are they, please?' we can't quote you for a single device or even 10,000 devices – you'll have to go to someone like TI or Freescale or Samsung, who actually license and produce the chips, in order to buy one," he said.

"But we could quote you several tens of milions of dollars for a license to build one of your own, if you wanted to."

He also said that many people are surprised that ARM is a UK company [Some anti-UK prejudice, y'think? — Ed.], seeing as how they play in an industry that's dominated by the US and the Asia-Pacific region. ARM was founded in Cambridge, where its headquarters remain today.

Another misconception that people have about ARM, he said, is that many believe that the company knows all about how its licensees use its designs. "People put those into all kinds of end uses," Shore said. "They go into fridges, toys, wireless baseband modems, network switches, servers, tablets, phones – goodness knows what they go into."

Not only does ARM not track what its partners – Shore's preferred term for licensees – do with their designs, some of those partners wouldn't tell them even if they asked.

"We produce a lot of products in secure marketplaces for things like banking cards," he said, "and our partners in those fields are quite rightly very secretive about what they do. They certainly don't tell their customers that they use our IP, and very often they don't tell us what they do, either. They prefer to keep that very quiet, and keep it to themselves."

The ARM architecture didn't originate from ARM, the company. About five or six years before ARM was founded, a Cambridge company called Acorn Computers, which made desktop PCs primarily for the education market, was casting about for a processor for the next generation of their machines. Nothing on the market at the time quite suited their needs, Shore said, so they decided to design their own. 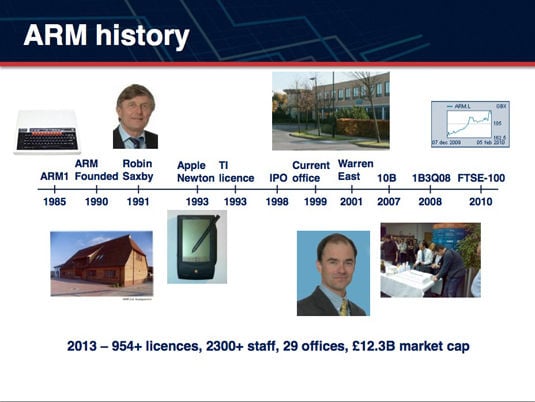 From a farmhouse outside Cambridge, UK, to a company worth well over £12bn

"That processor was designed by a very small team of only four engineers," he said, referring to the group led by Sophie Wilson and Steve Furber. "One of whom designed the instruction set, one of whom did the microarchitecture, and two others who assisted with the designing of the supporting chipset." That tiny team produced the processor in 14 months, and it first ran code in Acorn's offices in Cambridge on 26 April, 1985. "And ARM still occupies that office."

That architecture was called the ARM1, for Acorn RISC Machine, and went into a system that became wildly popular in the UK education market. "Everybody my age in the UK used one of those machines at school," he said – Chris is a middle-aged chap – but "they're long gone now."

Acorn is long gone, as well. "It split itself up towards the end of the 1990s, and eventually the final pieces of it were bought by Broadcom and it now forms the chunk of Broadcom's research group." Its legacy, however, lives on in ARM Holdings, which was founded in 1990, headquartered in a farmhouse 10 miles (about 16km) outside of Cambridge.

ARM's first CEO was Robin Saxby, who wasn't the founder of the company, but instead had been headhunted by the founders to run the show. Smart move, seeing as how Saxby came up with the licensing business model that has turned ARM into a global powerhouse.

Those resources, by the way, were provided by ARM's first funders: Apple, Acorn, and VLSI. "It was well-funded, but not lavishly funded," Shore said, and so Saxby came up with the licensing model, which he essentially invented. "It's an industry that ARM has gone on to dominate. We effectively invented it, and for the last over 20 years we've been fortunate enough to dominate it."

Next page: How Apple helped create ARM, and how ARM saved Apple
Page: