How Apple helped create ARM, and how ARM saved Apple

Although Acorn was one of ARM's original funders, it was actually their chip design and Apple's ill-fated Newton that gave birth to the company. "Apple, looking for a processor for that particular design, hit on Acorn's processor and loved it," Shore said. "They wouldn't buy it from Acorn because Acorn was a competitor in the education market, so between them they cooked up this plan to found a separate company to give Apple access to the design."

That separate company was ARM. "It's interesting to see that ARM had three founding fathers, if you like, or three parents – Acorn, Apple, and VLSI – and we've actually outlived two of those," Shore said. "Acorn and VLSI are no more, and we've arguably saved the third."

Shore is referring to the fact, as outlined in Walter Isaacson's Steve Jobs, that when Jobs returned to Apple and shortly took control of the company in the late '90s, Apple was in dire straits financially. As part of the turnaround that he helped engineer, Jobs raised a boatload of cash, Shore said, "by selling Apple's stock holding in ARM, which was worth a considerable amount of money. So arguably we've outlived two of our parents and saved the life of the third."

According to Shore, although Apple's Newton was key to creating ARM, it wasn't the most important early licensee that the company snagged, "because the Newton wasn't a particularly successful product." That key licensee distinction goes to Texas Instruments, which licensed ARM IP for a mobile phone GSM chipset it was developing for Nokia, the first chip that combined both the application processor and baseband processor onto a single piece of silicon. 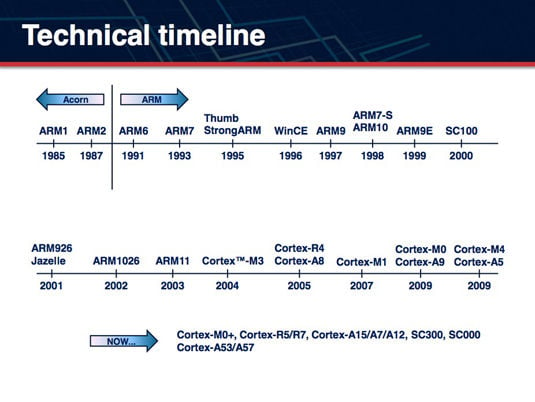 Nokia phones in the past, dense servers in the future

"Nokia back then was the king of the mobile-phone industry," Shore said. "Sadly that's not the case anymore. Unfortunately, we're watching the slow death of the company, I think."

TI's single-chip, ARM-based solution was so successful that Nokia soon adopted it across its product line. Soon, the chip was adopted by the rest of the mobile-phone manufacturers, and by the end of the '90s, ARM had a share of about 97 per cent in that rapidly growing market. "And that's a position that we still have," Shore said. "There are very few mobile phones that are not based upon our solutions."

The year after joining the NASDAQ and FTSE in late 1998, ARM moved into its present Cambridge headquarters. Robin Saxby retired from the company after 10 years as CEO in 2001, and was succeeded by Warren East, who remained CEO for a dozen years. Simon Segars took over as CEO earlier this year when East retired.

As of late October's ARM TechCon, the company had signed a total of 954 licensing deals, had 29 offices worldwide with major development offices in Cambridge; San José, California; Austin, Texas; and Bangalore, India. It was worth about £13.7bn ($21.9bn), and its partners had shipped 34.8 billion processors.

"We entered the FTSE 100 in 2010," Shore said. "The FTSE 100 is like the Standard and Poor's index, it's the index of the 100 most valuable companies on the London Stock Exchange. And we're currently – the last time I looked – we are about number 35 in the top-valued companies on the London Stock Exchange; we're slightly more valuable than Rolls-Royce and slightly less valuable than Sainsbury's, the supermarket."

ARM's IP – not just application processors, anymore – is everywhere. "If you look inside a typical ARM-powered product, whether it's a toy or a DVD player or a mobile handheld device, inside that you will find typically an ARM processor, possibly more than one – the average processors per mobile phone from ARM is approaching three these days," Shore said.

"You will also find ARM physical IP in terms of cell libraries and memory compilers; and you'll also find ARM development tools and our modeling solutions that will have gone in to help the development of that product. So we produce more and more components that people use to produce ARM-powered products."

Next page: So where does all that mazuma come from?
Page: