So where does all that mazuma come from?

If ARM doesn't sell actual, physical products, how does it rake in a billion bucks a year? "Everything we ship is essentially virtual," Shore said. "If you buy a licence from ARM, you get a massive tarball full of RTL," referring to the chip design's register transfer level description, which describes exactly how each circuit on the chip will behave and how each circuit is interconnected, "and from that it's your job to create a working processor design that can go into a working product."

ARM doesn't need to worry – as does rival Intel – about spending billions of dollars designing and staffing chip-fabrication plants, aka fabs. How and where their processor designs are fabbed is up to their partners, who then sell the chips to middlemen, OEMs and ODMs.

So how does ARM take its cut? "We make a large charge for the initial license – that is measured in millions, sometimes tens of millions of dollars for a licence to use one of our designs in a particular product or number of products," Shore says.

But that's not the only way that ARM makes money – in fact, it's not even where it makes the biggest chunk of its change. "Every time a company ships a device incorporating a bit of ARM IP," Shore said, "we charge a small royalty. That royalty is measured in cents per device" – averaging around 10¢ per device, he estimates. 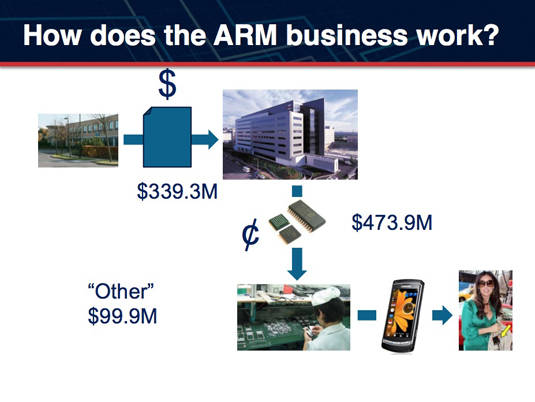 It's good to be a company for which $99.9m in revenue is considered "Other"

But do the maths. With ARM's partners' shipments approaching 10 billion per year, all those dimes – excuse us, 10-pence pieces – add up quickly. And not only do those royalties add up quickly, they also allow ARM to project profits into the future, seeing as how it gets money up-front when it charges IP licence fees, then pulls in royalty fees after that IP is turned into chips that make their way into products.

Not a bad business model. Thank you, Mr Saxby.

But from Shore's point of view, ARM is a bit of a boutique outfit when compared with the rest of the semiconductor industry. "We're used to working with companies that don't just have tens of thousands of employees, in many cases they have hundreds of thousands," he said. "And they have fixed-asset registers measured in tens and even occasionally hundreds of billions of dollars. In contrast – although we're the centre of a kind of spider's web within the industry, at the centre of this great partnership – we are actually a surprisingly small company."

Only in the semiconductor industry could a company worth $21.9bn with annual earnings of around $1bn be considered "surprisingly small". ®

When discussing his company's 64-bit ARMv8 architecture, Shore revealed that ARM-licensee Apple's implementation of it in its A7 processor came as a surprise to many at ARM. "Our fruity friends earlier this year stunned the world, actually, and stunned most of ARM's employees, in fact, by releasing the latest version of the iPhone supporting and including a 64-bit processor," he said. "They'd done that incredibly secretly and ended up stealing a march on the whole of the rest of the industry. It was quite a staggering achievement, to be honest."