Far from being the death of physics, the discovery of the Higgs boson in 2012 has set physics on a bunch of new searches – including how the Higgs decays.

Unfortunately for exotic physics fans, the latest announcement from the Large Hadron Collider ATLAS experiment falls right smack bang into the Standard Model. With a significance of 4.1 sigma (about a one-in-15,000 chance that it's a false signal), the Higgs boson has been observed decaying into two fermions known as Taus.

To turn the “so what” into something, a bit of background. The Higgs boson was postulated 50 years ago as a mechanism by which some fundamental particles would acquire mass. The Higgs has a very short life before it decays into other particles – and which particles it decays into (decay mode) would either verify the Standard Model of physics, or start a search for new fundamental theories.

The ATLAS physicists had already observed the Higgs decaying into photon pairs, or into pairs of W or Z gauge bosons (which mediate the weak nuclear interaction). 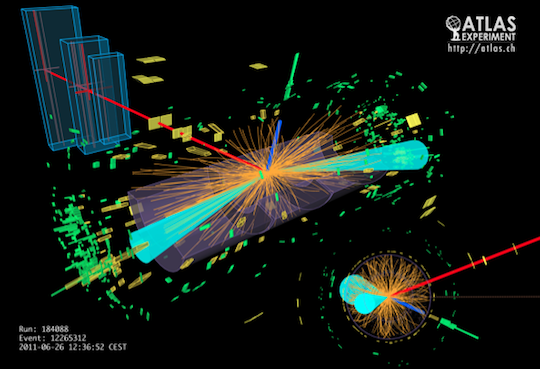 ATLAS illustration of the Higgs decaying into Tau particles

As ATLAS explains, the Brout-Englert-Higgs mechanism was originally proposed as a means by which the gauge bosons acquired their mass. The new result, if confirmed to a higher sigma, show that fermions acquire mass by the same mechanism.

And what happens to the pair of Taus the experiment seems to have observed? They decay further, into an electron and a muon.

If you're up to reading the physics, the ATLAS presentation is here. ®