The humbling sensation of having your stupidity monitored

This market segment is expanding rapidly; devices falling into this category will soon outnumber all other types of computers on the planet, if they don't already. The internet of things also signals new threats to personal privacy.

Devices that make up the internet of things are typically those which require minimal – or no – human interaction. Many of these are already in homes: they range from network addressable lightbulbs to the bleeding-edge biosensors and medical equipment that enable body hacking aka "the quantified self".

Despite Intel's belated recognition of its own utter irrelevance in this space, it isn't a credible player. When we talk about the widgets powering the internet of things, we are talking almost exclusively about specialty ARM chips, the lower power the better.

Most devices that fall into the internet of things category don't need any real processing power, just enough guts to poll a sensor of some variety, wake up an ultra-low-power radio, fire off its findings and go back to sleep.

The overwhelming majority of first-wave internet of things devices will be dumb network-connected sensors providing raw data. The number-crunching and analysis will occur elsewhere.

You'll notice I said "ultra-low-power" a lot. That's because the power goal behind most internet of things devices is usually something seemingly absurd, like a Bluetooth device that can run for two years off a watch battery or ambient backscatter (PDF) devices that use so little power they can sustain themselves on the kinds of radio energy put out by everything from television stations to your home Wi-Fi.

There are a multitude of low-power wireless technologies. There is also research going on into passive data dispersion devices; think of small sensors with dynamic RFID tags that your smartphone could gather information from as you walk by and you're on the right track.

These are the kinds of technologies upon which the internet of things is built. Naturally, more complicated automated computing devices will take more power. As such, the internet of things can stretch from a tiny infrequently changing dynamic RFID sensor sipping photons on a shelf to a massively complex, juice-guzzling industrial control unit keeping a nuclear power plant ticking along. The term is rather broad.

Why do we want the internet of things?

Many of the "sensory and control" possibilities unlocked by internet of things technologies are pretty self-explanatory. Retrofitting an existing building with traditional centralised automation technologies aimed at lighting or HVAC is expensive.

It also tends not to be particularly granular; at best you're getting the ability to turn on or off everything you could have controlled with the light switch, in some cases you're limited to the breaker box.

The internet of things approach would be to bypass all that hullabaloo and simply install wireless light bulbs. These could be added as existing bulbs fail and each new bulb added gives your system individual control of that bulb.

Add some sensors and you can have the lights in your home turn on and off when they sense you (via cell phone, implant, watch, etc) enter or leave the room. In commercial or industrial buildings you could preprogram lighting cycles, typically augmented by sensors looking for movement or the presence of an employee cell phone.

Alternatively, you could use it to play video games on buildings, though you may want to get permission first.

I'm wiring up my fish tank to the internet. The newest incarnation will automatically top itself up when the water gets low, feed the fish and other mundane tasks. I am working on sensors for PH, conductivity, and even a spectrometer so I can test for ammonia, nitrate, nitrite and phosphate levels. 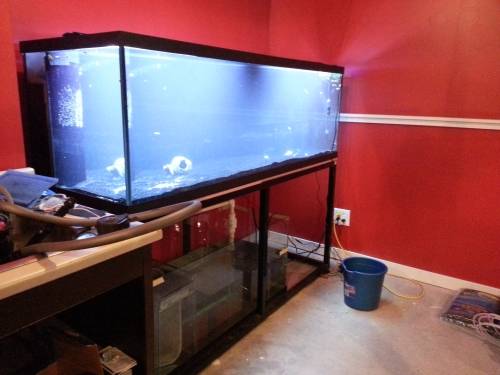 Quantify and automate: this fish tank will be assimilated

Deviances in any of these parameters can tell me ahead of time of there are problems, allowing me to proactively solve environmental issues for my fish. This is a big change over what was possible even five years ago. Test strips and chemical tests were time-intensive and subject to human fallibility; many aquarists simply had to wait until fish got sick to know something was wrong, by then it was often too late.